Atlas Intelligence is yet another new auto trading software which is nothing more than a mere scam. The video on the main page bills the service as a seminar or webinar as it is called. However, this is just a promotional video to promote this scam service. The claim made is that Atlas Intelligence is an artificial intelligence software, but in fact, it’s just insipid.

The service asks users to leave all of these data sources on except for Bing which is odd! The buttons shown are fake but give you the feeling of having some control of the software. We think that Atlas Intelligence is nothing more than a scam which insults people’s intelligence.

A few rotating labels on their website stating things like special discounts, with some stating that people are making $570,027 a week. The number keeps changing and growing to become outrageous each time. However, all it takes is to refresh the page, and all the numbers are reset which proves it is a hoax.

Oh and like all other scams we have reviewed over the years they also use a bogus countdown timer. They keep telling you that the Atlas Intelligence passport will expire in x amount of time. But even after waiting for that period of time nothing really happened. You can still signup because after all they want your money and they want it because they will run away after getting it.

The video starts with the little bar at the bottom saying that it is ’live’ and it is made out to look as though there are a bunch of people connected to the stream. The video is not live despite the impression they are trying to give but why does the bar say ’live’?

The impression they want to give is that this is some sort of demonstration or a webinar, but it’s pretty obvious that this is neither but rather an attempt to get people engaged in an otherwise pre-recorded video.

Despite what it claims, the live product demonstration isn’t actually live

The other thing that caught our attention is the voice. It sounds artificial almost as though it’s a chipmunk from a popular children’s animated series. Though we think it is someone trying to disguise their voice via digital pitch altering software.

But why would they want to hide the real voice? That’s because these people probably have a bunch of other scams on the market that uses their own voice. They fear that people will link them to those scams and not sign-up with Atlas Intelligence.

Despite the effort made to hide the voice, it makes the so called webinar irritating. The northern England accent is easy to pick-up despite the altered pitch which begs the question if

The Atlas Intelligence’s main page uses the timer and counter which counts each time someone logs in. The website also has an Atlas Intelligence video which shows how much money people are making each week. But none of this should mean anything because all these are just tools of the trade for scammers trying to rush people into a decision. 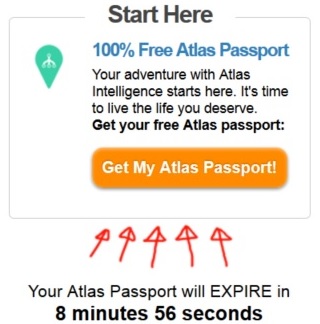 Atlas Intelligence is trying to use the angle of ’artificial intelligence’ to sell their service to people. However, this is not a unique aspect, we have come across three similar types of trading software so far, and we’ll probably run into more. That said it is a new angle that scammers are using and if successful more will be using this angle.

The same artificial voice we discussed, goes on to show us the software in action. The sales pitch has been kept the same i.e. people who use this will enjoy financial freedom. However, the actual video uses a sort of live demonstration angle to scam people.

You may think it is live, but it’s not. The so called Atlas Intelligence passport gives users access to the software. That said you can watch the entire video and judge for yourself though we warn you it’s a waste of precious time.

Since we have watched the video already multiple times to review, we went ahead and clicked on the ’get passport’ button just to check out what happens.

To recap the narrator’s voice has been disguised so that nobody can recognize him, and that’s why we may never know who this person is. On the second page of the Atlas Intelligence site, we are faced by yet another familiar pop up.

The new pop up is like a chat window initiated by a person called Cindy who runs another scam called ”Profit with Cindy.” This is another scam we reviewed recently, and it gives us the impression that the two are somehow related.

We personally think that these websites if anything are run by a community of scammers. Cindy can often be Amy or any other person for that matter because you never really see or hear their real voice. So, this person Cindy can also be found on Fiverr.

She (Cindy) says that her statement is simply part of her video blog series and happens to have created the free account on Atlas Intelligence and since then made $600 in profit. She goes on to say that it’s unbelievable and that they don’t charge a fee until you get the account which is merely stating the obvious.

We also ran into another sign-up form for yet another binary options broker. But things have been changed here a lot so that you can’t tell if it’s a broker signup form or a new system of sorts. Obviously, this is yet another scam which you should avoid. Other than that the second page of the Atlas Intelligence website has nothing else to offer.

The video or the website mentions no broker or how trading is made possible without the services of one. The video has just three testimonials and apparently talks about how great the system
is and how like Cindy or even Amy you can make truck loads of easy money without doing a thing. But these people are paid actors on Fiverr, and anyone can hire them for a few bucks.

Since we have covered the second page quite thoroughly, we decided to fill up the Binary Options Broker form and sign-up to see what the system has in store for us on stage three.

After we entered all the details into this doctored form, then we waited a while, but unfortunately, our IP was blocked which comes as no surprise. However, we decided against clearing our cookies and trying again because the software is just not worth the effort. It is in actuality a binary options scam that we have exposed.

Let us not forget the guy who is shifting the pitch of his own voice so that it cannot be recognized or used against him in the court of law if caught. Then we also have another scam called ”Profit with Cindy,” coupled with various countdown timers. But the one key element we are missing that every self-respecting trading service or tool should have is live trades though even that is manipulated by scammers.

We have established without a shadow of a doubt that Atlas Intelligence is nothing but a scam. It is a lousy excuse for a binary options trading software and seems to have been designed in an effort to scam newbie traders.

After going through Atlas Intelligence’s videos and even content on the website we have to say that it does not have anything to say. They just want to get you hooked long enough to pull out your credit or debit card. At the end of the day, their goal is to hook you up with a shady broker who will try to extract as much money as possible and then you’ll never hear from them again.