Bahama Banker is a trading system which claims to help traders make millions, but is that actually the case? Does Harold Beckman really know what he is talking about? Though we have seen many other successful auto trading and signal systems out there but the majority of them were impractical.

Interestingly, with this software, the beautiful Bahama islands works as a sort of backdrop for this software. The Bahamas are a symbol of luxury, comfort and most of all wealth.

The Bahama Banker System claims to offer profits which are not realistic. In our experience, unrealistic claims of profits are usually associated with shady trading systems. So, we ask that you read our entire review before deciding to invest your money in this software.

The creator of the Bahama Banker software i.e. Herald Beckerman claims that traders will benefit from a 96.1% winning ratio because it will only enter profitable trades. The software uses High-Frequency Trading methods which mean that it will buy and sell shares in seconds which is supposed to help traders make millions in profits. 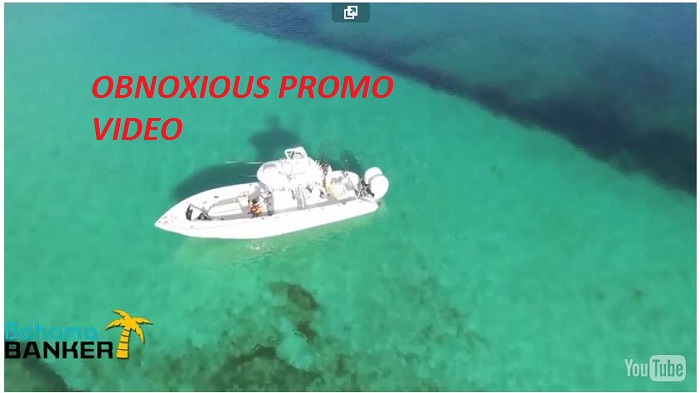 As usual, this robot has an obnoxious promo video in it’s homepage

As professional traders and people who have reviewed many auto trading software in the past, we can tell you that HFT is not compatible with binary options trading. The prime reason is that it relies on entering and exiting trades in mere seconds.

Binary options have a fixed expiration time which prevents traders from exiting and entering into trades within a second. It is for this reason that we believe that this is fake software, and if anything should be avoided. We managed to uncover a few other elements of this software which are common amongst other scams run in the past. 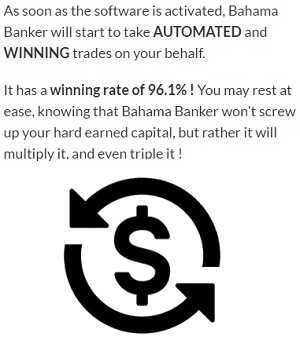 Of course, these promises are ridiculous

We can tell you right off the back that there are literally hundreds of badly performing trading software which are solely meant to lure newbie traders into investing money.

Many of these systems make unrealistic promises in an effort to attract mostly newbie traders who may not look for genuine performance evidence. The Bahama Banker app is no different because it uses the beauty, luxury, and wealth associated with the Bahamas to lure people into using the software.

Using a voice narrator is usually seen as being a misrepresentation of the product because it’s employed by many scams. Plus, whenever you have an auto trading software claim that trading with it will help anyone make millions on autopilot it’s in 99% of the cases lies.

Our experience with testing both great and bad software leads us to state that Bahama Banker is not even worth testing. One reason being is the mountain of evidence in the way of feedback and complaints against this software.

To further solidify our stance on Bahama Banker being a scam we will provide more proof below.

Harold Beckman – Who is he?

Harold Beckman is supposed to be the voice who’s narrating the entire scam video. Though we tried to validate his existence but couldn’t find anything not even specific to the trading community. We find it strange that a software and the person behind it claiming to have over 10,523 members is still unheard of in the trading community.

The same goes for this person’s professional experience as a banker and even Dimitri. We can guarantee that these statements, promises and so called experience they claim is all fake which stands to reason why the software has not worked for traders.

Why does the Bahama Banker algorithm turn up short?

Binary options unlike other trading systems rely on either a Lower or a Higher strike price and give out fixed profits. So, apparently, you can’t use HFT when the expiration and the strike price is set.

So, even if the platform is capable of executing multiple trades a second it’s incompatible with how binary options works and goes to show that the creators have no idea as to what binary options is really about.

Trading binary options is a whole different world with its own set of benefits and features. You can make a profit so as long as it’s either lower than or higher than the strike rate. So, even a movement of 0.1 pip in either direction means that you make money. It is for this reason that the algorithm that the Bahama Banker claims to use does not work with binary trading.

The claim of a 96.1% win rate is a scam, to say the least. Any binary options trader can tell you that anything above 90% is not possible. Plus, after some research, we found that the domain bahamabanker.co was launched recently in September 2016, which makes the claim of there being 10,000 highly successful members doubtful.

Bahama Baker uses fake testimonials drafted by actors who cannot be independently traced. These people are supporting the service’s misleading claims of profits seem to have been hired from Fiverr.com.

Fiverr is a marketplace mainly for scammers who want to hire cheap labor with loose morals for just $5 a pop. It goes without saying that many scammers source their talent from Fiverr because it’s cheap and no questions are asked.

Now when you take a look at the demonstration by bahamabanker.co, it’s trading at 30 seconds a trade with a highly risky money management technique. It appears that the account grew from just $1000 to over $7000 over the course of several trades and that too by risking all the funds for each trade. If anything it is the worst example of money management when trading.

We need to emphasize that guaranteed profits do not exist. So, traders need to manage their funds wisely. Good money management will mean long term trading viability.

It stands to reason that based on all the evidence we provided above the Bahama Banker System is, in fact, a scam. Harold Beckman does not exist, and the trading algorithm they claim to use does not apply to trading binary options. Add to that a long list of fake testimonials. Plus, the fact that they are using an image of the Bahamas as their slogan for a wealthy lifestyle only furthers our point of it being a scam.

We found bad reviews from many traders which is why we have declared it unsafe. If anything we wouldn’t advise that you even test this software because we didn’t. It didn’t make it to the testing phase. So, steer clear of Bahama Banker at all costs.