Some time back we reviewed the BinaDroid 2.0 trading software which we deemed to be unreliable. But despite that being a newly launched system, they (the people behind BinaDroid 2.0) have launched BinaBot. However, we know that the two are linked and run by the same people because it uses the same sales video, same website and even content except with a different name.

The sales video starts by telling people that the system was created by Troy Everett. However, while it is the same guy in both videos, his presence makes us doubt this robot as well. Read our full review below to find out what our investigation revealed.

To start with let’s consider the fact that everything between BinaDroid 2.0 and BinaBot is exactly the same. Both systems use the Android operating system and gauge trader sentiment which is factored into its trading decisions. Since markets are mainly driven by people who have an opinion which changes from time to time, this is, in theory, a good idea. 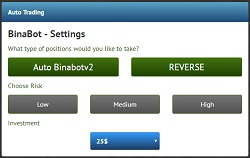 The settings tab is a convenient addition, it’s a shame that it’s tied to a fraudulent system

However, perhaps the difference is that BinaBot’s algorithm allegedly doesn’t just track trader sentiment but also looks at some types of signals. Other factors considered is historical data and overall risk for a particular commodity or binary option. According to the creators, BinaBot has the ability to assess the overall reliability of these signals and then rank them in order of how effective they may be.

The bot then tracks trades which are based on the ranking of its signals, or it sends those signals to the trader so that he or she can use it to trade manually. Though in reality, both systems don’t have a proven track record of working.

Our advice to people who are considering the software is to sit and wait until there is proof. Till then you’ll want to avoid all the offers that the creators make. If you liked the first version and are a huge supporter of it, then we advise that you don’t upgrade just yet.

Other than the official sales video we found no information about how BinaBot or BinaDroid 2 works. That’s why we can only speculate as to what kind of results BinaBot can deliver. The presentation wants us to believe that it is some sort of enhanced trading bot with a 92%-100% trading success rate.

Truth be told we’ve heard dozens of similar promises from scammers in the past. Since scammers run them, there is something inherently wrong! That’s why we are skeptical of if it even being a legitimate system.

We hoped by submitting our name and email address to gain access to the members’ area we would be treated to more information. Though it was not surprising when we couldn’t find anything more than what’s on the home page, right down to the welcome video. We found no additional information about BinaBot which would lead us to believe that it’s legit.

Interestingly the members’ area has the very same testimonials as the website itself. Perhaps these testimonials were the proverbial last straw that broke the camel’s back which in this case is our opinion of it being a legit system. 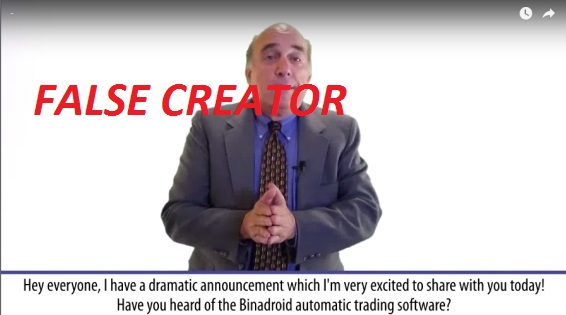 The creator is a paid actor, as is typical with these systems

Personally, we would never trust this bot with our money, and we advise that you don’t trust them either. We doubt it’s trustworthiness and that’s because the testimonials come across as being doctored. No actual traders that we know of or in the trading community have said anything positive about BinaBot.

The testimonials curiously quote a 3-month profit. But how is that even the case when the software was just released? Well, that’s where things get tricky.

Even though BinaBot claims to have a so called’Reverse Button’ and even a ’Smart Trading’ feature which sets it apart from the original software but none of these work. At least there is no proof offered of it having the ability to work.

This system is definitely not to be trusted

We learned that there is also a mobile application of the bot. Though as we investigated the mobile version of the software, it was not hard to find out that it was dotted with various glitches and problems. So, in other words, it’s unreliable.

We are also concerned about their claims of providing 24/7 support. Given that there is not enough data to gauge their overall quality just yet but there are too many question marks about if it really exists. Finally, based on our assessment, it’s hard to believe that they offer anything of quality.

We wouldn’t advise that you jump the gun and sign up for the app just yet. BinaBot cannot be called the best or even the worst just yet. Though its first version was good and which is something you can rely on and continue to do so until this new version proves itself worthy of your investment.

Honestly, we cannot guarantee that BinaBot’s latest version even has something to do with the original creators. We would advise that you steer clear of BinaBot for the time being.