The Binary AutoTrader is one of the best-looking trading platforms in terms of design that we’ve seen over the years. We’re impressed with its design despite it being a scam.

In this review, our goal is to dive into the important aspects of this trading platform to provide you with all the info you need about it. However, before we go any further it’s important to clarify that it is a scam and because of that, we wouldn’t recommend investing money with it.

Everything You Need to Know about the AutoTrader Scam

The biggest problem we have with the Auto Trader platform is that the creator has remained anonymous or chosen to do so. The official website has not listed the name of the company or the name of the team or any other information that we’d find useful.

Plus, there is no information as to how the software works or how effective it is in the real world. So, we are led to believe that it does not work which is why the creators have chosen to remain anonymous.

Even though binary-autotrader.com has chosen not to provide us with any information about the software, we still know a great deal about it. Our experience with investigating over a dozen similar trading robots suffices for us to uncover what they are trying to hide.

To start with they are using white label technology and similar approaches to other scams we are reviewed. According to the creators of the platform, the system uses a short term trading system. Which in this case trades every 60 seconds and expires within 10 minutes. 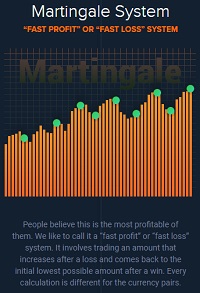 The Martingale System is a tried and true method, just not with this robot

If you want to see how things look with the trading software then signup for a demo registration. It will help you figure out a number of key features.

The purpose of so many features is to offer investors multiple trading options. At the end of the day using the tool for a couple of weeks will ensure that traders can use a mix of various indicators that yield the most profits for them.

But that is only if they work which in this case they don’t. After testing multiple times, we couldn’t get the required indicators to turn ’OFF’ or ’ON.’ They also don’t change the behavior of the trading algorithm.

We also question the sanity of the developers who added five similar working indicators as the software’s triggers. MCAD, Stochastics, Williams, CCI, and RSI are pretty similar and any experienced trader knows that for a fact. All of these indicators measure the overbought and oversold markets which to us and many traders don’t make sense.

Perhaps the only changes to the settings which actually affects the trading robot’s performance has to do with the trading methods. However, regardless of how you look at it, the primary goal of this trading software is to steal people’s money. Take the Martingale method which just doubles up on a trade, so even if it’s a losing trade that will be doubled up on too.

After a few bad trades by the software, your account is empty in the blink of an eye. The same goes for using the Fibonacci or any other method that doubles down on your investment. Bear in mind that any and all methods are not 100% guaranteed to succeed.

In our opinion and those of others who have used the system everything has been designed to drain a trader’s capital quickly.

How does the scam work? 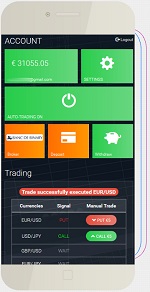 The system offers a mobile platform, which is something we don’t often see on shady robots

The Binary Autotrader relies on an approach that may come across as highly convincing to a novice trader. Like a genuine system, the creators allow people to register a free demo account so that they can get a feel for how the system works.

Though the demo accounts are all well and good but they cut traders off from reality. The system makes you believe that you’re winning every trade when in the demo phase. Once you are confident enough and decide to make some real money that’s where the trouble will start.

Your account is quickly depleted, and then you’ll be asked to deposit more money. Since the creators have chosen to remain anonymous and so you have no idea where they reside there is no way to take legal action. So, your money is gone forever.

We think that the fraud is relatively easy to identify. Also, you can take a similar approach to debunk many other robots. All you need is to signup for their so called demo account, then open up two dozen positions.

After that compare the expiration rates with the real time charts from another broker like your existing one or use a free, unbiased online chart. The differences are clear and it’s not hard to see that Binary Auto Trader is gaming you.

The deceiving programmers or creators of the system have not synced the demo with real time charts but rather with their own server which helps them generate only positive results. So, what you are being led to believe is a complete fabrication.

So, far we have been able to investigate, debunk and then black list over two dozen fake trading robots. Though the fake trading bot industry first kicked off with one called Option Robot back in 2015.

The original king of fake trading robots kicked off a storm of copycat scammers looking to make a quick buck using a similar formula with Binary Auto Trader being the newest spin on the same idea.

It is important to go over and understand the examples we have laid out throughout the review. Keep all these pointers in mind each time you come across a so called genuine trading bot. That way you’ll be able to avoid the vast majority of malicious scams.