When it comes to trading, binary options or otherwise, charts are one of the most common and useful tools that traders use to predict future price movements based on historical patterns. This form of analysis is known as technical analysis, and due to its immense popularity, most trading platforms come built-in with various technical analysis tools. In this article, we will be giving you a brief primer on the basic types of chart patterns you will see when trading binary options (or any kind of trading, really); note that this is not an ‘in-depth’ article (refer to our other articles for that) but just a quick introduction.

The 3 Tenets of Technical Analysis

First, you have to understand the 3 main tenets of technical analysis, which are:

The first tenet, prices discount everything, means that the price of an asset has taken all underlying factors that could affect its price into account. To put in another manner, technical analysis believes that all factors have been ‘priced-in’, meaning there is no need to analyze each factor separately and that the movement of the price is all that is needed to be analyzed.

The second tenet, prices move in trends, means that once a trend in a price movement has been established that the future price movement is more likely to be in the direction of the trend rather than against it.

The third tenet, history tends to repeat itself, means that price movements are repetitive in nature due to market psychology; meaning that players in the market are assumed to have the same reaction to certain events over time. This tenet is basically ‘using the past to predict the future’.

The 2 Types of Patterns

Next, you need to know that regardless of the shape of the chart pattern, which we will elaborate on below, all chart patterns fall into 2 categories: continuation and reversal. A continuation pattern means that despite some minor price movements, the price movement will likely continue with the trend. Reversal patterns are the opposite, and it’s a pattern that indicates that previous trend is about to come to an end and reverse.

Now that we’ve got that out of the way, let’s take a look at a few of the most common chart patterns that you will see when studying charts. They are: Head and Shoulders, Triangles, Pennants, and the basics on candlestick charts.

No, this is not an anti-dandruff shampoo brand, but rather a common and highly reliable reversal pattern. Many traders who use technical analysis, or ‘chartists’ believe this pattern to be a good sign that an upward trend is about to reverse. As for how it got its name, check it out below: 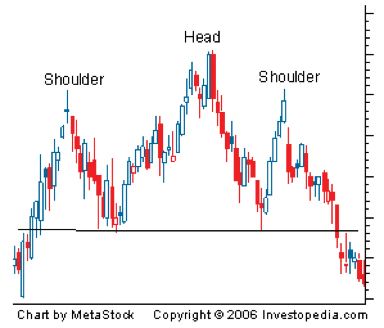 Not shown in the chart above, is that prior to the first ‘shoulder’, there is a long upward trend; after the first ‘shoulder’ there is a price decrease, followed by a rebound to a higher point; the ‘head’ and then another decrease followed by a smaller rebound to the second ‘shoulder’ followed by another decline. Chartists interpret this pattern as a ‘battle’ between the bulls and the bears of the market and the two rebounds (the head and the right shoulder) show small market rallies of the bulls. Since the second rally of the bulls only reaches the level of the ‘shoulder’, this is an indication that the market’s momentum has swung in favor of the bears and that a continued downtrend is likely.

There is also an inverse head and shoulders pattern, which indicates the reversal of a downtrend. In this case, it shows that the bears attempt to rally but eventually the bulls prevail and the price reverses its initial downtrend. 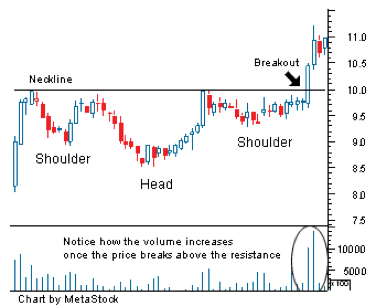 We have covered triangles and pennants in our article “Measuring The Time Element To Set The Expiration Date Of An Option”.

Candlestick charts are a charting tool that is very popular in binary options trading for the main reason being that it reflects a much shorter time horizon. As we explained in the examples above, some other technical analysis patterns can take weeks or months to materialize, making them more suitable for longer term types of trading such as stock trading. In binary options however, with such short expiry times, shorter term charting patterns may be more effective and candlestick charts are well suited for this purpose. Let’s look at the basic candlestick and candlestick chart. 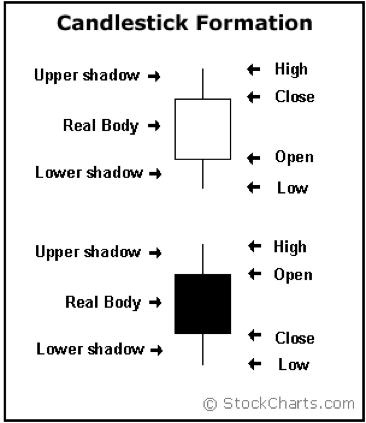 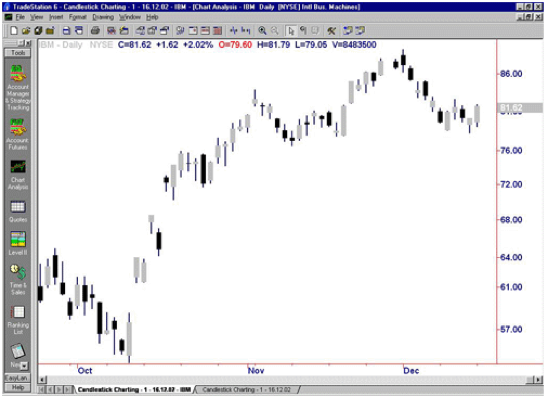 This means that the length of the candlestick body shows us the strength of either the buying pressure or selling pressure on an asset. 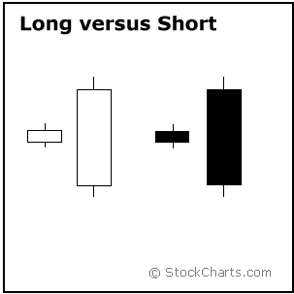 Above and below the candlestick bodies are the wicks or shadows, and the tips of the wicks represent the highest and lowest prices of the period. What about the length of the shadows? 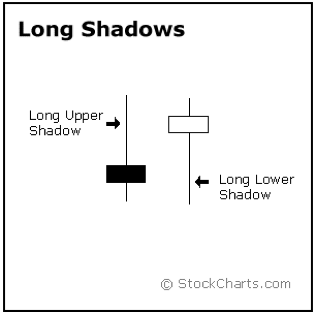 This can be broken down further into the relative length of the upper and lower shadows. A long upper shadow with a short lower shadow indicates that buyers were dominating during the trading session and drove prices higher but eventually sellers forced down the price creating a large gulf between the top of the shadow and the bottom of the shadow.  A long lower shadow and short upper shadow mean sellers dominated initially but buyers eventually drove prices back up.

What about when the length of the upper and lower shadows is equal? When such a scenario occurs with the addition of a short candlestick body, which is what is known as a ‘spinning top’. 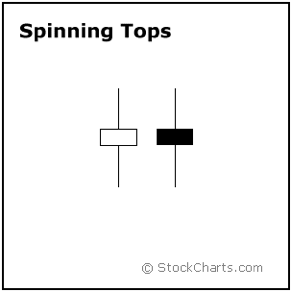 As we mentioned above, a long and short shadow means that there was some sort of reversal during the trading period; if the shadows are of equal length, which is an indication of market indecision. The short body means that there was not much price movement between the opening and closing, and the equal length of the shadows show that both buyers and sellers exerted roughly equal pressure during the session. Spinning tops are however a good indicator of a reversal of a trend; if it was preceded by long white shadows, indicating strong buying pressure or long black shadows, indicating strong selling pressure, a spinning top will show that since the pressures are becoming equal, the trend is potentially reversing.

When the candlestick body is really, really, small, so much so that the candlestick looks more like a cross, this is called a ‘doji’. The length of the shadows can vary; both candlesticks below are dojis. 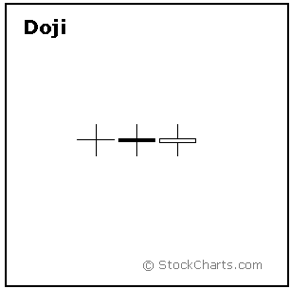 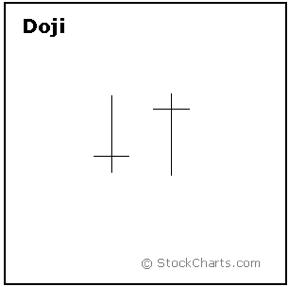 Dojis are again a sign of market indecision; while prices can move to various highs and lows during the session, eventually the close and open are relatively equal. The final result of the ‘battle’ between the bulls and bears is a draw.

What do dojis imply in the context of a trend? Again, similar to spinning tops, dojis are a sign that a previous trend (whether positive or negative) is about to end as buying and selling pressures equalize. 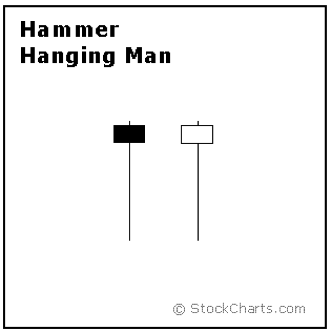 Let’s close off the article with the final candlestick pattern: the hammer and the hanging man. Both of these patterns look exactly the same and can have either black or white candlestick bodies; they are both also reversal patterns. What differentiates the two however is the trend that precedes them; the hammer forms after a downtrend while the hanging man forms after an uptrend. 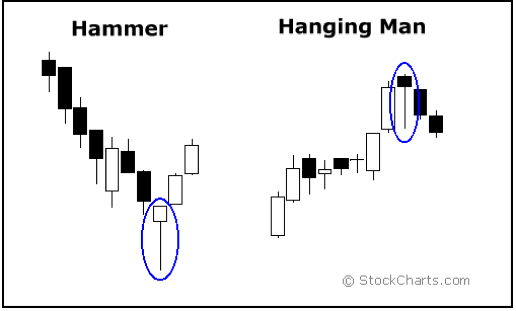 The hammer indicates the reversal of a downward trend as the long bottom shadow indicates that the sellers really pushed the prices low but at the end of the day it finished strong. Similarly in the hanging man, which is a reversal of an upward trend, the low long shadow after the upward trend indicates that selling pressure is starting to materialize despite the fact that that prices still finished strong. Both the hammer and the hanging man are not ‘strong’ patterns and require further bullish or bearish confirmation; as we see in the chart above this confirmation is provided by a long white candlestick in the case of the hammer and the long black candlestick in the case of the hanging man.