The Binary Options Millionaire is yet again another scam which will leave you with nothing except for an empty bank account. Our review reveals exactly why this is a scam, and shouldn’t apparently be trusted.

It is a relatively new scam which according to our research shows went live in November 2016. The scammers selling this software to the public make outrageous claims one of which is that users can generate a whopping $319,195.37 each month like clockwork!

Through our research and general understanding of how scams like these work, you can be assured that the Binary Options Millionaire software will not make you any money. So, the situation, in reality, is very different from what you’re being led to believe.

After a thorough investigation, we identified it has a white label which has and continues to be used by many other scams. We found the very same platform in use by other scams like InterTrader, Profit Replicator, and Bahama Banker to name a few.

Do we think that Binary Options Millionaire is a scam?

Yes! We believe it’s pretty obvious, but we’d also like to explain as to how we arrived at this conclusion. The first reason being that it’s being presented by someone we’ve been told is called Clark. He claims to be the founder and CEO of this app.

Though there is no record of any person by this name beyond the official BO Millionaire website. Plus, why is he hiding his last name? The reason here is that Clark is actually a hired fiverr.com actor. Since we are unable to verify that this person exists and his true credentials it instantly means that it’s a good idea not to trust it.

The facts are that nobody knows who the presenter of the software is but here he is trying to manipulate and pressure you into buying it. That’s why he starts out by saying that Binary Options Millionaire helped him make millions in just a couple of months and that you too can become a millionaire by using the app for free. 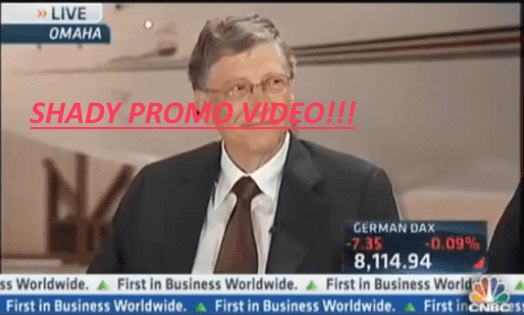 As is tradition, this shady robot uses a promo video to market itself

By using words like ’free,’ he’s trying to imply that making money does not cost anything, not even time since it works on autopilot. But as we will soon learn the software is by no means free!

Everyone you see taking part in the video presentation has been hired by the scammers behind the application or software. Even the testimonials that you see speaking of how the software works like magic has been sourced from hired help.

Usually, scammers will steal pictures from individuals’ Facebook, LinkedIn, and other social media profiles. They will then post a review besides the pictures which make it appear as though these people have used the software.

Some scammers will hire individuals too, who will appear in a video testimonial saying that they made millions ever since they started using the robot. So, another reason why we don’t trust the Binary Options Millionaire software is because it exhibits all the signs of using unfair and illegal means of manipulating people’s opinion and perception. If anything it’s all lies.

More proof of Binary Options Millionaire Being A Scam

Everything that you’re told in the presentation is a bunch of lines. So, it’s no wonder you can’t verify a single claim that they make. The lies include the story of this self-made millionaire called Clark.

It goes without saying that how can he say that it’s free when the people he’s associated with, i.e., the brokers are charging money for the service. As traders ourselves we know that nothing is free in this industry. Don’t believe that this person has good intentions just because he wants you to believe it.

A spelling mistake on a banner is a new low

Despite the fact that the Binary Options Millionaire is being billed as some sort of high accuracy trading robot, it is still meant for you to lose money than making any. If anything these scammers expect that people should just trust the software and even them with money. Though by doing so you’ll be positioning yourself to lose.

But why are they putting so much effort into trying to convince you to use the software? Well because it’s part and parcel of promoting the shady brokers they are in partnership with for a commission. As soon as you add $250 to your account, it’s gone into a black hole run by a network of shady brokers and unknown individuals.

Binary Options Millionaire’s Signals Are Not Going To Help You Win!

Binary Options Millionaire is run by a scammer or perhaps even a group of fraudsters who are the only people who will win when you use the software. These people get paid for every person they send to the doorsteps of the shady brokers they partner with, and so they don’t care who gets scammed.

Most of the brokers that you’ll be dealing with when you use an app like Binary Options Millionaire are blacklisted and use an array of dirty tricks to steal money from their clients.

The brokers in cahoots with Binary Options Millionaire are not honest, to say the least. It is why the service and the people backing it need to rely on purchased, fake testimonials, in an effort to portray an air of authenticity.

We found out that one of the people you see in the sales video was paid just $15, to deliver scripted testimonials and various reviews at 1080p or Full HD resolution. Anyone can visit Fiverr to see this person’s profile. That said scammers can hire just about anyone to deliver a glowing testimonial.

We are well aware of the facts and have presented them to you without bias. At least for us, we’ll not be investing in Binary Options Millionaire, and we advise that you don’t either.

The Media Endorsements are Just Sales Tactics…Not To Mention Fake!

It is not unusual for scams to use fake media endorsements to deceive would be prospects. We went ahead and investigated all of the websites that seem to endorse the software. But didn’t come across a single one where Binary Options Millionaire was even mentioned once. We then turned to the section called ”People who have just made profits’’, and here too we weren’t able to verify the claims
.
But despite everything, these scammers were brazen enough to offer us a deal before the time runs out and we lose out on the opportunity of becoming millionaires. Try clicking on the ’back’ button on your web browser or try closing the window and you will get a pop-up stating that you’re about to lose a tremendous opportunity to make millions.

The website was never featured on any of these places

Though in actuality it’s just a sales tactic used to literally beg people for their money. The message claims that you’ll be able to see a live account in action after giving them your email address. But yet again this is a sales tactic, and the video is fake too.

We have yet to come across any scam that gives people real evidence to support that the live trading account is in fact live. All you see are a spreadsheet with graphs and figures. Some may even show you a doctored bank statement.

Our personal experience as internet marketers and traders shows that these cheap sales tactics no longer work. People are a lot smarter and especially traders who need to weed through schemes like these almost every day to find something that works. Finally, because the people behind Binary Options Millionaire failed to provide any real evidence of it actually being profitable, we conclude that it is a scam.

Ask anybody who has been trading for a while, and they will tell you that making $11K a day is impossible. Nobody has ever made that amount of money by just using software, let alone investing in a scam.

The people behind the Binary Options Millionaire are trying to sell you a dream and its geared towards individuals who know little or nothing about binary options trading. Hence they think that people will believe the exaggerated profit claims.

We have put forth the truth about this system so that everyone can benefit from it. You shouldn’t have to watch the sales video to understand that it is a scam. However, you are welcome to double check all the statements made in the sales video and debunk them on your own too. Our advice: stay away from this scam!