While the most beginner traders are familiar with the ‘traditional’ binary option, known as the digital option or the high/low option, these days most binary options brokers are offering way more than just the digital option as the more exotic options gain in popularity among traders. In today’s article, we will elaborate a little on basic trading principles as well as explore 3 types of exotic options: ladders, early closes, and pairs.

Regardless of whether you are trading the most basic digital option or one of the exotic ones that we will be exploring in this article, all options come down to either being a ‘put’ option or a ‘call’ option. As options trading is basically a trader taking a view on the future price movement of an underlying asset, which can obviously only go in two directions: up or down, the put and call options are general bets on such price movements.

In a put option, traders are betting that the price of the underlying asset will decline in the future while in the call options, traders are betting on a future price increase. Each option will have a strike price; and depending on whether it is a put or call option, the underlying asset price will have to go either above (call option) or below (put option) the strike price in order for the trader to profit. There will also be an expiration period which determines how long the trader has for the option to reach said strike price. An option that reaches the strike price is said to be ‘in the money’ and one that doesn’t is said to be ‘out of the money’. In a typical digital option scenario, a winning trade nets the trader anywhere between 70% to 85% while a losing trade loses the trader 90% (this spread is how the binary options brokers make a profit).

Now, what determines the trader’s view of the future price movement of an asset? There are many factors, such as market conditions, economic releases, even personal opinions plus many technical analysis tools that a trader can utilize to take a view on the future price movement. Smart traders are also continuously monitoring market and economic news closely as such announcements can cause an immediate and sometimes quite dramatic movement in the underlying price of an asset, especially when it comes to trading currency pairs. Technical analysis is colloquially known as ‘charting’ and is something we will be exploring in depth in our binary options education series.

The selected expiry time is also a big factor in this; if the expiry period of an option is really short, then it is highly likely that the major predictor of whether or not the strike price will be achieved will be based on the most recent price movement. In those short expiry times scenarios, technical analysis or charting may not be the most appropriate analysis tools as there is insufficient time for chart patterns to complete or ‘breakout’ (which is when the price of an assets breaks away from a recognized pattern such as triangles).

Ladder options are one of the newest innovations in the binary options trading landscape, and more and more brokers are offering this type of option nowadays. You might have seen brokers advertising ladder options having payouts as high as over 550%, which seems highly enticing, but the question is, how do they work and how can they justify such high payouts? Let’s take a look.

First, the reason behind the ladder terminology is the rungs on a ladder, with each rung representing a different strike price. Most brokers will offer up to 5 rungs or strike prices meaning on a certain asset, a trader can take a position on up to 5 different strike prices simultaneously! These rungs will usually be evenly spaced out, and the current price of the asset will be somewhere in the middle, meaning that there will be rungs above the current asset price and rungs below the current asset price. Therefore, ladder trading allows traders to take either an up or down view of the asset price. And because the highest or lowest rungs require the most movement in the underlying asset price in order to be profitable and thus have the lowest probability of being hit, the payouts increasing accordingly, which is why the brokers can promise payouts ‘as high as 550%’. These represent the payouts at the furthest rungs of the ladder which have the lowest probability of occurring.

Here’s an example screenshot of a ladder option on a typical binary options trading platform, in this case using the AUD/USD currency pair as the underlying asset. 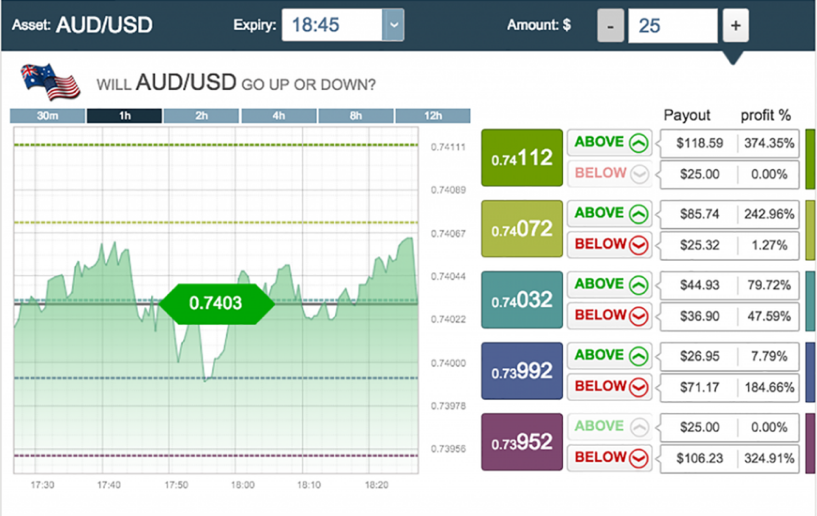 As we mentioned earlier, the trader has the option to select multiple rungs of the ladder including rungs above the current price level and below the current price level simultaneously. While this doesn’t seem to make sense since it implies a contradictory view of the price movement, this actually can be used as a hedging mechanism allowing the trader to artificially ‘close out’ the trade before the expiry time; sometimes the trader can still make a profit through the difference in the payout between rungs.

Some brokers also allow early closes on ladder trading (not requiring the above hedging mechanisms); this early closing window is typically available only 5 minutes before the expiry time. Early closing will of course cause the payouts on in-the-money options to be lower.

Selling an Option before Expiration

Some binary options brokers and platforms offer early closures on options; an example is as mentioned in the ladder options above, however it is usually available on other types of binary options as well. As the name implies, early closure gives traders the options to close out their option before the selected expiry time. An early closure is also known as an ‘option buyback’. In an early closure, the payout ratios for both in-the-money and out-of-the money options would be reduced; the quantum depends on the statistical matrix the broker uses to calculate early closure payouts. In addition, many brokers also have various rules for early closure such as only being available to certain options, or within a specific time window. That being said, let’s take a look at a few reasons traders might want to utilize this feature.

The reasons the trader might decide that the option will expire out-of-the-money when it is currently in the money or expire further out-of-the-money will, of course, depend on individual trading strategies. As a quick example, the trader might have noticed or predicted an upcoming trend reversal through technical analysis, or unexpected market news might cause increased volatility.

Pair options are also a new innovation in binary options trading where the underlying asset is actually the relative performance of two difference assets or a pair (note that a currency pair is not a pair option but a single underlying asset). Currently, the most common type of pair options offered is the relative performance of two stocks, for example, Apple/Google or Facebook/Amazon. Typically, the stocks chosen for each pair tend to be correlated and within the same industry, making for easier analysis.

There are 2 kinds of pair options: fixed and floating. Let’s take a look at the differences between the two using a hypothetical pair of Apple/Google.

Fixed Pair: At the point you purchase the option, known as the option start time, the relative performance of each stock is measured up to the option expiry time, which is a fixed time period. You can select which stock you feel will outperform the other (in terms of percentage gain) from the option start time to the option expiry time. If you make the correct choice, you will receive the corresponding payout which is typically at the same level as digital options payouts. Early closure may or may not be available.

Floating Pair: In a floating pair, the option start time is not the time at which the option is purchased but rather the beginning of a certain trading period, such as beginning of the day at market open. The option start time is fixed and will not differ regardless of when you purchased the option. The option expiry time is also not a fixed time period but the end of a trading period such as end of day, week, or month. Relative performance is also not measured by percentage gain but rather whether it outperforms the other asset. Payouts are also much higher and can range to as much as 350%. For example, if at the option start time Apple was trading below Google, and at the option expiry time Apple was trading above Google, then the option is in-the-money. Early closures are also available throughout the option period, although, of course, the corresponding payouts would be lower.