The recently introduced Click Money System is the latest scam to hit the trading industry. It claims to help traders make huge profits on a regular basis. Bold claims such as these have meant that the system had caught the eye of many traders new and seasoned alike from across the world.

On the face of it, users need to have an invitation to join the Click Money System since it purportedly has limited slots available. The person running the system claims to have made over $16 million dollars in profits within just 12 months of using the system which is insane by any measure. So, we decided to take a closer look at the software to determine if it was as it is claimed.

Our research found that the Click Money System was just another scam on the internet targeting investors. The claim of being able to make vast sums of money is merely a ploy to lure unsuspecting traders into making wild investments.

We are going to reveal what we found when researching the Click Money System and present a series of proofs to substantiate our verdict of it being a financial scam. Anyone who has been thinking about investing in the Click Money System should first read through our in-depth review prior to making a hasty and possibly dangerous decision of trusting the system. 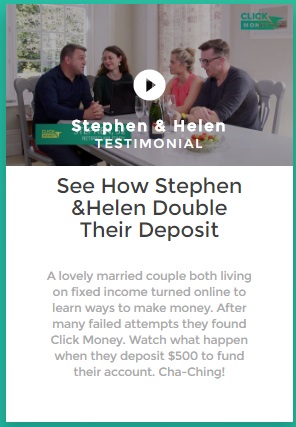 So, obviously, the people behind the system are not those that you see in the promotional video. The people you see claiming to be Julia and Harold are just actors who have been paid to play a role in the scam. Obviously these people are not ethical because even they should know that this system they are helping to sell is nothing but a scam but by all means, they aren’t the real people behind the scam.

The real brains behind the scam have stayed behind the camera we suspect. Also, the actors are obviously not expert traders, neither are the creators who we suspect are just affiliates for various binary options brokers. It means that the scammers get paid a commission per sale or referral each time a new customer or trader signs up with the brokers they represent.

Take for instance the fact that when you click on the Click Money System’s ’sign up’ button, you’re taken to a broker’s page where a $250 deposit is demanded. When the deposit is made the broker obviously rewards the people behind the ’Click Money System’ with a commission.

We also discovered that the creators get a 100% commission, so 100% of your money goes to those who created the scam system. But why? Well maybe because based on the Click Money System’s ability to continue scamming people for thousands of dollars they know that these people are worth more than just $250. 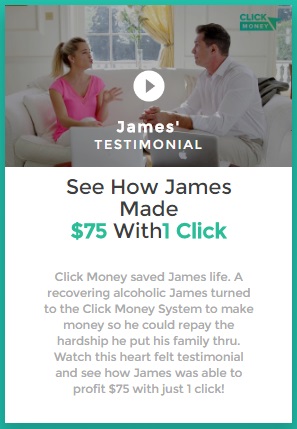 They possibly know that anyone who signs up is potentially worth over $1000 on average to them. So, the creators get a commission for scamming you and they in turn also start scamming you for more money.

According to the sales pitch depositing $250 into the Click Money system will get you access to their state of the art software but that does not really happen. The software that you do get access to makes losing trades from start to finish until your account balance has been exhausted completely.

Why do they make money when you lose on trades? Since the binary options broker paid a whole lot in commission to the creator of the system, they need you to lose so that they can pocket the profits.

So, the software works by ensuring that you lose money. Once the account has been exhausted, you’ll receive a call, and they will try to get you to invest more money. The professional sales people will pitch just about everything just to have you put more money into the trading account.

They may come across as being your friend and with your best interest at heart but its all to get more money. It goes without saying that these brokers have scammed people out of their entire life’s savings with one person reported to have lost over $500,000 to a similar scam.

The claim made by the click Money System is that it will work without any risk but in turn, will return an enormous amount of money in the way of profits. Plus, since spots are supposedly limited only a few invitations were sent out and only to people who registered. But that’s where things are fishy!

How did we get access to registering with the system? Apparently through an invitation right? But NO! We went to the website and got access, so the whole story of it being invitation only is fake. Also, when you get on the website people are expected to register before time runs out with a timer ticking on the screen.

They say that people will be banned if they don’t signup on time, but even that’s just another scam! The timer just never runs out even after hours of keeping the page open. This is an old sales trick to hurry along people into making a hasty decision because it does not give them enough time to research the scam that’s been laid out by the Click Money System. 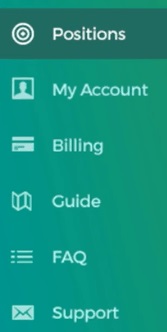 Even after what we’ve revealed in this review you may still wonder how there are still so many positive reviews about the Click Money System. A simple Google search can yield many glowing reviews and testimonials from so-called millionaires who are satisfied customers. But while that may be convincing the fact remains that the Click Money System has paid people to give out these testimonials.

As a matter of fact, anyone will write a fake review for $5, just head on over to a website like Fiverr and you’ll find hundreds of people willing to do this for you. Plus these are the websites from where scammers can hire cheap actors too, who will make a video review praising the so called Click Money System.

The positive reviews you see on Google are mainly written by:

Who are About Julia and Harold? 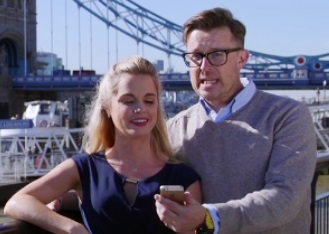 The founders of the scam system called Click Money System are Julia and Harold both of whom claim to be from a low-income family. Harold says he’s an engineer by profession with a minor in finance. Julia graduated with a major in Economics. The duo worked as a team to build the software and the so-called ”Click Money System,” to help others like them make money.

We would have found the story plausible if it wasn’t for these random actors. Even though they are the best paid actors perhaps on Fiverr.com, with better acting skills than the rest but they are actors nevertheless.

We tracked them down and found out that these people were just paid actors which lead us to conclude that their lines and reactions were scripted and can’t be trusted.

We have proven that both Julia and Harold are fictional characters. We have also proven that the Click Money System is a blacklisted scam and a clone of the so-called ’Push Money’ app. Anyone who thinks that the app or the system is genuine will end up losing any money they invest.

The fraudsters have rigged the system to work against traders, and so their money will be lost i.e. stolen. If you receive any spam from the Click Money System or get a link to download some software that purports to help you make money unsubscribe and delete it immediately.

This scam is peddled by affiliate marketers who will do anything to steal your money and so it pays to be vigilant.