Professor Matthew Lewis is the creator of this blacklisted software called Code Fibo. In this review, we will expose the supposed ”cutting edge” software or trading bot as it is called. We will also debunk the claim that it is capable of generating $7000 a week.

During our research for the review, we uncovered the smoking gun of this scam. The one piece of evidence which connects all the required dots to ensure that there are no doubts left in anyone’s mind about this software.

Additionally, many trusted sources have told us that this technology is fraudulent despite it being heavily marketed by various marketers who are looking to make easy money by defrauding traders.

If anything this is the classic, so called ’get rick quick’ type scam that these fraudsters are using to mislead and deceive people. So, we’d strongly advise that you be very careful and don’t trust anything they tell you.

The company uses spam to bait would be customers. Spam, email marketing methods, are not only unethical, but the emails themselves are highly misleading. It is for this reason that we’d strongly recommend that you refrain from taking any action except for unsubscribing to their email. However, you’re encouraged to read on to find out why we think that Code Fibo is a malicious scam geared towards newbie traders.

Proof of Code Fibo Being a Scam

The website has a picture of the person known as Professor Matthew Lewis, who is supposed to be the creator of the software trading bot. Though interestingly when we reverse checked the photo, it turns out to be of John Hugill a B movie actor. He’s played roles in a number of films like The Counselor and Grand Piano.

A nice looking platform, to be sure, too bad it doesn’t work

The 3rd image that you see on the website has been taken from John Hugill’s IMDB profile, here Hugill promotes his services as an actor. You are more than welcome to browse Mr. Hugill’s profile and read about his career. He is also the same person or actor who has been featured on other binary scams like Binary Interceptor and Virtual Income.

Obviously, this actor has a way of projecting an image of honesty that the crooks love taking advantage of with their scams. That said this quality is what makes him very dangerous to the unsuspecting trader looking for a trading bot.

Professor Matthew Lewis claims to help show how anyone can make up to $7000 each week. He argues that anyone who sees the software in action will think it’s the biggest moment in their lives. Later in the video, a real life demonstration is arranged by a lady called Carol Hunter.

At that point, the claim changes to the software making comparatively smaller profits but with lower risk trading practices. But because the bot trades multiple times a day the profits soon add up to being astronomical.

Lewis makes yet another interesting claim stating that his software has a very high winning percentage in just about any and every market regardless of conditions. His claim is that to the untrained eye the market appears to randomly move up and down. But in his experience that is not the case because it is made up of traders who are people and because of that the markets can their trends can be predicted.

The software purportedly works by analyzing the direction of the price and trader sentiment. According to Mr. Lewis the first time he used the principle, he was astonished to see that eight out of every ten trades were wins. According to him, this law is called the golden ratio and the Fibonacci numbers or sequence.

There’s no such thing as “Fibonacci Strategies”

Lewis then goes on to solidify his hypothesis about how the software works with an example from nature. He talks about how flower petals and pineapples are all mainly based on the Fibonacci number sequence. So, we are expected to believe that market prices rise and fall while obeying this so called golden rule?

Lewis said that he further refined his trading strategy by trading based on what he calls ”Fibonacci sentiment analysis.” Using this method Mr. Lewis was supposed to have been able to trade with a 97% success rate.

When you remove all the fancy wording and peel away the pseudo mathematical or scientific statements what you’ll see is the reality of this malicious scam. It is a sophisticated scheme which relies on the assumption that the financial market works in a certain way. That is then backed by a number of fake bank statements, fake testimonials, overly exaggerated claims of making thousands a day and various other lies.

If anything the narrative they are putting forth is severely flawed, and the half truths are laid bare for anyone to see. It’s deeply deceptive but most experienced traders can see right through it. That’s why their market is mainly people who know nothing about trading.

Is the Software Free?

It is not free though they would like you to think it is. Anyone who is interested in even testing the software has to pay $250 to join this scam program. 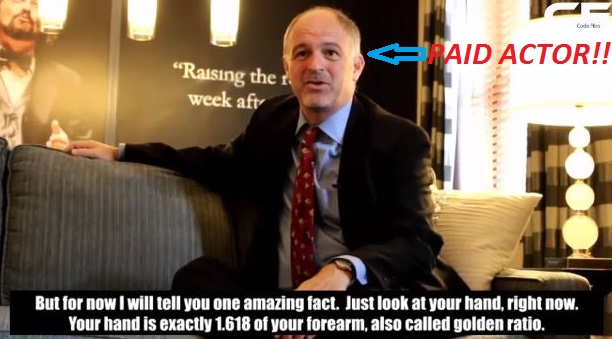 The creator is obviously a paid actor

These people charge your credit card via their crooked brokers who are obviously not regulated. It also means that you’ll never see that money again.

Many so called real review websites will post fictitious reviews. These crooks act as a sort of gateway for crooked or scam software. They will post positive reviews in exchange for money usually in the form of commissions. It is for this reason that most review websites cannot be trusted and especially if they make it look as though it’s an excellent way to make money!

Most people don’t know which of the two is right for them. After lots of research, we have been able to compile a list of the best and most trust worthy money making bots and services. So, you can choose either without worrying about being scammed.

The software called Code Fibo, being peddled by this guy named Professor Mattew Lewis is without a doubt a scam. We have had to blacklist it because it blatantly steals money from people.

The software was designed by crooked affiliate marketers who have partnered with shady offshore brokers with the intent of defrauding people. Unless you have lots of free money, we would strongly advise that you stay away from this scam app and bot because you’ll never see that money again.

Anyone who wants to test the waters can sign-up, fund it and check the trading account. But be assured that there is no way to get a refund. After spending time and effort on researching the Code Fibo software for this review, we couldn’t find one single person who has used it and made money.

If we are able to find anyone who can prove that they made the money they claim they have we will update this review. But until then you are advised to stay away.