COSS (Crypto One Stop Solution) is a platform that pools together all the functionalities that a crypto trader might need under one platform. It is based in Singapore, and it is famous for being transparent, fast, and secure.

Besides being a cryptocurrency exchange, Coss provides other services such as a fully equipped platform for launching ICOs, a wallet that supports a wide range of tokens, a market cap widget, a fiat gateway and more. Coss arrived in the crypto niche in 2017, and it has strong ties with Romania, the strongest being its affiliation with the Romanian Chamber of Commerce and Industry.

The flagship product of Coss is its Coss Coin, which is traded on a revenue share model. Coss Coin Initial offering was launched in 2017. The total possible volume of the coin is capped at 200M, with 130 million released during the ICO.

Besides Coss Coin, Coss supports the exchange of over 54 altcoins, including Ethereum, Bitcoin, Omisego, Dash, and more. The platform is available in 8 languages including Vietnamese, Spanish, Bahasa, Korean, Turkish, Arabic, Chinese and more.

Before registering with any crypto exchange, it is crucial to ascertain the fees. For takers, coss coin charges an average trading fee of 0.25%, which is the industry average. The taker’s fees drop once they reach a certain level of trading volume. Takers on coss coin can pay as little as 0.15%. The exchange does not charge makers any fee. This boosts market liquidity.

The only financial drawback of this exchange is that it did not support fiat deposit during its early days. So, new traders had to use another exchange first, before they could trade on Coss Coin.

Except for fiat currencies which carry deposit fees of up to 8%, COSS doesn’t charge deposit fees. Another critical factor that Coss coin users must consider is that it is still very young. The liquidity on the platform is very low.

Starting 2017, the exchange upgraded its daily limit for all types of account to $2000, and this limit is expected to hold until the company completes the KYC (Know Your Customer) procedures. According to the company, once the KYC process is completed, you will be able to login into the website, and apply for an upgraded KYC compliant account.

The coss coin is an Ethereum based ERC20 token that pays dividend to its holders from profits made from Coss exchange fees. Investors can hold their coss coin in any ETH wallet. Coss distributes 50% of its exchange transaction fees to token holders. The divided are paid weekly.

The COSS web platform can be accessed from a desktop device through any browser. It supports different languages, such as English, Chinese, Arabic, Vietnamese, Turkish, Korean, Spanish, and Bahasa. This diversity in languages means that virtually anyone around the globe can navigate the platform with ease.

In terms of look and fees, coss has a sleek interface. You can trade over 54 coins including ETH, BTC and more. The brand has all the heavyweights of the cryptocurrency niche from hot ERC20 tokens such as OmiseGo to privacy altcoins such as Dash.

However, the website does not offer margin trading. Even worse, the brand does not seem to have a plan to offer leveraged trading soon.

The website is fully-optimised for smartphone view, meaning that all the services offered on the website can be enjoyed on the go. There is also a downloadable app for the wallet available on both Google Play and the App Store.

The app has nice aesthetics. However, the one thing that can really use some upgrades is the trading charts. They seem too basic compared to what you would find on mobile apps of other brands such as Bittrex.

The support page allows users to create a new support ticket or view the status of a ticket that was submitted earlier. There’s also an extensive FAQ section on the same page with detailed articles on topics such as how to register, make a deposit or withdrawal, verify your identity & much more.

At the bottom of the page, users can find links to COSS Coin’s social channels including Facebook, Reddit, LinkedIn, Youtube, and Medium, where a concern can be taken up by community members or a member of customer support.

Getting Started with COSS

Here is a step-by-step process on how to get started:

Here is a list of the platform’s special features: 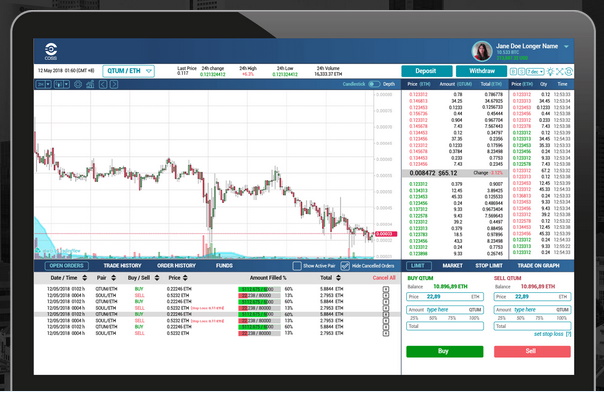 Clicking on the “Exchange” button reveals the trading section. Although there is nothing distinct to separate it from the competitors, it is highly functional, responsive, and easy-to-use. The absence of advanced features such as technical indicators on the charting screen, however, means that the section is not sufficiently equipped to cater to the needs of advanced traders.

The COSS Wallet comes with virtually all the security benefits that major exchanges offer. These benefits include instant email notifications, back-end cold storage, and 2-factor authentication.

Merchants can set up their online stores with COSS to be able to accept payments in a wide range of digital currencies. The platform gives them all the tools they need to manage the crypto payments effectively while still being able to convert easily from crypto to fiat currency.

COSS accepts Initial Coin Offerings on its platform. Projects are listed on the COSS exchange upon approval. In many ways, the Coss Coin ICO platform is a gamechanger as far as making ICOs accessible goes. Once approved, Coss supports and facilitates the ICO and thereafter, lists the coin. The ICO listing process is simple and fast. You only need to do the following:

Coss (Crypto One Stop Solution) is an exchange platform that aims to become just what its name says. Besides offering passive revenue to Coss Coin holders, the company is working closely with reputable bodies in both Singapore & Romania. Its fees appear to be within the norm, and their website is well-designed.

A closer inspection of the software architecture, however, reveals that the split revenue model could be risky not to mention that the coss wallet is susceptible to a security breach because it is software-based. There have not been any reported security incidents so far but keeping in mind that the platform was launched only 2 years ago, we cannot vouch for it as being completely secure. Users are advised to approach new pairs with caution.