We have solid proof of Dollars All Day being a scam trading software. You will read about how we went about exposing this fake trading software for what it really is. If you have any plans of signing up for this so called ”revolutionary,” trading app then we’ll ask that you hold on until you find something good.

We decided to review this software after getting questions from many of our readers asking if it was a scam. So, we went about debunking its claims in an effort to prove that it was indeed banking on false information and promises. Long story short the Dollars All Day software is a scam, and as like all scams, it should be avoided.

The brainchild of Vito Nolan, it is a day trading software. According to Mr. Nolan, the software was created, so that it has the ability to research the binary options trading industry 24 hours a day and 5 days a week, then deliver signals based on that research.

The creator also claims that the app will change the lives of many who use it since they will be able to make around $24000 each week. While the claims are certainly attractive, they are bogus. The objective of these claims is to simply attract attention and that is it! Interestingly when we read this figure, it instantly raised a red flag.

It is for this reason that we decided to research and find out more about this software. Our goal was to find out exactly how it had the capability of generating thousands of dollars a week, something that’s even claimed in the testimonials.

These are all lies, obviously

Now for us to get more information about how the Dollars all Day system really worked we had to analyze the official website. The video presentation is done by Vito Nolan who also shows off the software.

Plus, he goes on to show proof of his account swelling up with money as a means to convince people to pay for the software. However, all of this leads us to believe that this is a con artist. Mr. Nolan thinks that we should just take his word for whatever he tells us just because he is showing us his manipulated bank account.

Anyone can manipulate their trading account, it’s not a big deal. If anything it makes us further doubt the system’s authenticity. However, we don’t want to waste time talking about his account because there are other things that also support our assessment of this app being fake.

We found the presentation on their official website, i.e., dollarsallday.com to be arrogant. The creator is pressuring people watching the presentation to sign up for something that clearly does not work. However, the method he’s adopted is very similar to other scam artists on the internet. One method of pressuring a sale is to allude to there being limited time available.

Creating artificial scarcity forces people into making a hasty decision which is often the wrong one. The fact is that even if you were to visit the website next day or even next week, it would still be saying that there is limited time left and the offer will run out within a couple of hours. So, clearly that too is a lie.

Evidence supporting Dollars All Day being a scam software

We started with a couple of points below which would in most cases be enough to brand the software a scam. However, we would like to also dive into other reasons why we think this is yet another trading scam.

Another lie by Nolan is the claim that the system has helped him earn millions since he started using it to trade back in 2015. So, we wanted to double check this and discovered that the domain was registered just a month ago. So, how can a domain that was registered barely a month ago be earning for an entire year? Which makes it pretty clear that Mr. Nolan is a liar.

Made up Reviews and Testimonials

We also wanted to find out if the testimonials and reviews that Dollars All Day was boasting about was real. So, went ahead and sat through a very annoying video narration and various testimonials only to discover that most if not all of these testimonials have been purchased from freelancers on Fiverr.com. 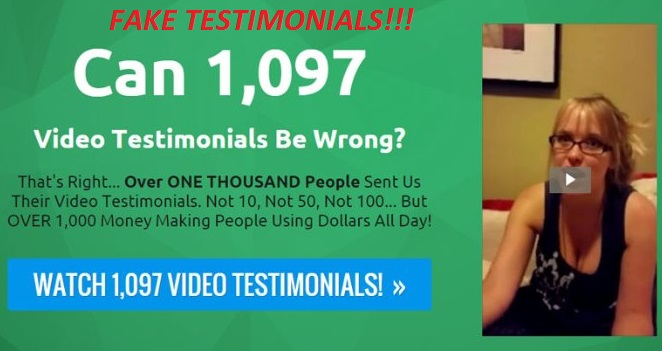 All those video testimonials can be wrong, if they’re by paid actors

Which means that just about every video narration and testimonial is fake because it has been paid for. So, these Fiverr freelancers are getting paid to mislead people running a scam system.

Anyone can go to fiverr and hire people willing to make a 30 minutes video for just $5. Many of them will even write a dozen reviews for that amount. Speaking of fake reviews, we also found dozens of fictitious Facebook likes. It goes without saying that the scammers are doing everything they can to mislead people.

Do They Really Give The Software For Free?

Even though they would like you to think that the software is somehow free it is not. Free means that you don’t have to pay a dime to use it. However, that’s not the case with Dollars All Day because they force you to fund a brokerage account prior to using it.

The brokerage requires that you fund it with at least $250. The excuse is that the money is to fund your trades, but in fact, that money goes directly into their pockets.

Of course the video is free, that’s not really a selling point

Will you see that money again? No, you will not! That’s the whole idea of this scam. If anything you can’t even choose your own broker which is yet another red flag alerting you need to be careful. We firmly advise against choosing any broker that Dollars All Day recommends.

Not in Every Country

Now they say that the software is available to anyone and everyone across the world. But that’s untrue too. It’s not available in many countries and regions. Which debunks yet another claim being made by the company.

Dollars All Day is a scam, a fraud, and a complete lie. We have presented you with all the evidence you’ll need to make a judgment call in this regard. However, experienced traders can easily pick apart the claims made by these scammers. It is for this reason that we believe that it is a scam targeting newbie traders or those who want to make money fast.

Anyone who is remotely considering the system should read the complete review. However, if you really want to invest in a trustworthy, and useful signal software that will help you make money, then this is not it.

We have a list of systems that you can trust but don’t expect to make thousands a week. If the creators of a scam make promises that are too good to be true, it is because they are running a scam.