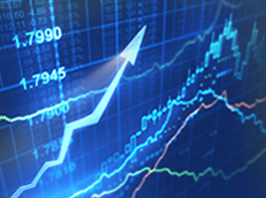 The key to making successful trades on binary options often comes down to recognizing patterns in the data. These patterns often indicate not only bearish or bull markets, but can also help predict price reversals; that is why they are such a key analysis tool that a trader can rely on. One of the more popular patterns that binary options traders use is called a ‘head and shoulder pattern’.

These patterns look almost exactly like their description; they contain what looks like a left and right shoulder, a right and left neckline, and a head (the head of this pattern represents the length of a measured move of the market that is the key indicator for making a trade based on this type of pattern).

When looking at the head in the pattern one should notice that it stands out higher than either of the shoulders (the shoulders are each approximately at equal levels to each other too). This represents the quick spike to the upside that the trader is looking for. After the head there usually is a retrace that is fast and then followed up by the price starting to consolidate again. This price consolidation often forms what is considered the neckline in a head and shoulders pattern.

The neckline is said to be a logical step that takes place in the market movement and can be intuitive of what happens next as far as making the trade.

Once the necklines have formed, it is then time to look for similarities between both of the shoulders. This helps the trader to determine the precise entry point to enter into a trade (usually done by buying a put option in the case of a head and shoulder pattern).

The first thing that needs to be considered to identify the entry point is the height of the left shoulder of the pattern. Take this height point and then project it onto the right shoulder; this creates a nice entry point because it is very likely that the reversal will take place in a very similar way to that of the left shoulder. Depending on the time frame used, it will also help give you an idea of the time frame of the expiration point, so pay close attention to that also.

Next one must look for where the neckline is first broken; it is this moment of time that the market price is testing the neckline again where it is highly favorable to place a put option. Keep in mind that it is not mandatory to wait for the new neckline test because sometimes it never comes and you may miss a favorable trade, however, the majority of the time it does appear and it’s considered a favorable place to buy your put option.

The final thing to look for in a head and shoulders pattern inspired trade is the measured move. This is identified by the distance from the head to the neckline and then re-projecting this same distance across to where the neckline will most likely again be broken by the right shoulder. This is the area that is favorable to placing put options as opposed to calls.