Trading the Thrust of a Triangle 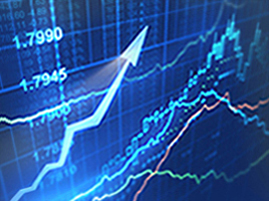 As was stated previously, when analyzing technical charts for the purpose of making binary options trades, triangles that appear within the charts hold a lot of key information that you can use to base your trades on. Perhaps no part of the triangle is more important to analyze than the thrust of it. Let’s take a look at how to identify the thrust of a triangle.

To quickly review triangles, it is important to remember that they are often the preferred way of identifying consolidation (period of indecision before the price breaks out of its restrictive barriers). They can only be seen by examining a random chart and time frame. The most common triangle found on technical charts is called a contracting triangle.

Not many traders realize that contracting triangles, like other identifying patterns such as flags, head and shoulders and pennants, also contain a measured move. What does this mean? It is imperative that the market move must travel in order for confirmation of the triangle to take place. If this does not happen, then a contracting triangle is not being formed by the market and you should look elsewhere on the chart to get information for your trades

In order for a triangle to be used in analyses, it must contain five legs, no more or no less. When the triangle is then analyzed its 5 legs should be labeled from left to right, a thru e. Where is the thrust of the triangle located? It is determined by taking what is called the 75% distance, the distance from of the longest wave of the triangle plus the additional distance to point e or the end (this is often the length from point b to e).

Keep in mind the thrust, or measured move, needs to confirm the pattern no matter what. Once you learn to recognize this triangle pattern on daily or weekly charts, you will then be able to recognize the significance of triangles more easily and the importance of making binary options trades based on their thrust.