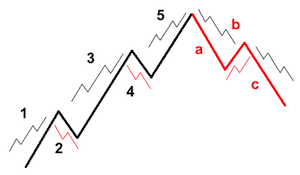 According to the Elliott Waves Theory, the corrective waves in the five-wave structure are the second and the fourth wave in the impulsive move, while in the flat pattern the corrective waves are wave A and wave B as well as the waves A, B, C, D, and E in a triangle pattern. As you can see from what we have said before, there are no many possibilities and from this perspective the things are mostly straight forward.

However, this issue gets a bit more complicates and a lot more confusing when corrective waves are the subjects of consideration because they can form simply as well as corrective corrections.

When it comes to the simple correction, the wave A, for example, that follows the five-wave structure can be created from the simple correction, or more precisely, A, B, C that have lower degree. On the other hand, the complex correction indicates that instead of the fairly simple A-B-C wave structure, market is actually creating more than one corrective wave that have the lower degree and in the case of the wave X or even in intervening wave X it seems to be appearing to the equation.

From our perspective, there is even one issue that seems to be more important when we are trading with the Elliott Waves and that issue is the issue of knowing the waves structures as well as knowing the degree or the cycle that the one is counting. The classical five-wave structure is marked with the numbers and it should be followed by the simple a-b-c structure or the correction. The most important thing in this issue is actually the a-b-c and it is knowing whether it is a simple or a complex correction. Even though markets are most of the time creating the complex corrections because they display a tendency of spending more than 65% in ranges which means that the notions such as triangle patterns and it does not matter if they are expanding or contracting patterns, ZigZags or the flat patterns that can be found in majority of cases unlike the impulsive moves.

This notion might be a bit of a surprise for the traders that are using the Elliott Waves Theory for the analysis of the markets because traders are attempting to hunt down the third wave in an impulsive wave because that is the move in which the market should be traveling the fastest. However, in majority of cases that is only part of the complex correction that features the larger wave X.

In the cases when the triangle is behaving like the simple corrective wave, then we should mention that this can happen only when the wave B in ZigZag pattern or wave 4 in the impulsive move. Additionally, in both case the price actions that are following should be limited in two aspects – the aspect of the price and the aspect of time – because market has no room for market to follow until the end of the given triangle and in the end it will be revisited.

To put it differently, if it happens that you notice a triangle as the fourth wave, then the traders should put options because after the triangle is broken to the upside in the case of the bullish impulsive move, the markets will make a new high when we compared it to the highs from the third wave and the price will have the tendency to move lower as the new high is being created. The same can be applied in the case of the bearish impulsive move.

Where to find Simple Corrections?

When it comes to this issue, it is very important to recognize the difference between the simple and the complex correct that is being given by the intervening wave which has been marked with wave X as we have previously mentioned. The information about the length and the nature of the wave X is also providing us with the information about the nature of the entire complex correction that the market is going through at that moment.

The Elliott Waves Theory can also be seen as the sum of several different scenarios that are being created on the basis on what the market has done on the left side of the chart in order to project the price action on the right side of your chart. When one pattern is confirmed of being either a simple or complex correction, that is the safe time for a trader to trade with put or call options that feature the expiration date that is closely connected to the time frames in which the analysis is being conducted.

You have the opportunity to find out more about the simple corrections and what they are by watching the two video recordings that are also part of this mini-educational series. Also, check out our top recommended brokers to try this with.