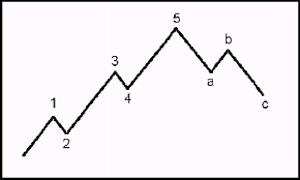 What are Complex Corrections?

The complex corrections are actually the patterns that awaken doubt in binary options traders that the Elliott Waves analysis actually works. There are numerous possibilities when it comes to this area. All the complex corrective waves have one thing that they all share and that is wave X. We have already dealt with that wave X in some of the previous projects so feel free to look at all information that you need from that project.

In the case when the wave X connects two corrections that share the same degree the market is then said to be forming double combination. However, in case when the wave X is actually connecting three corrections that are characterized as simple which is basically two X waves that share the same degree, then the market is said to be forming the triple combination. You can choose any of our top recommended brokers to try this with.

In the case when the wave X is retracing more than the 61.8 percent of the retracement level from the correction that appeared previously, it is possible to a high degree that the market will be forming the complex correction that can be characterized and put into the category of the double or triple threes.

Before you actually start, it is very important to actually know what you can expect when you start with the counting of the waves using the already mentioned, Elliott Wave Theory because, as we all know, the market is forming different patterns that can be described as corrective or impulsive patterns. Consequently, this issue of whether the wave is corrective or impulsive should be first on your mind when you take a look at the chart. In the case when it is the corrective wave, they you should ask yourself about the nature of the correction that is appearing and whether it is a simple or complex correction.

The market can actually have different degrees of complexity and in this case we are talking about several different cycles that are being created where we are trading with the Elliott Waves and this issue might actually be the hardest one to understand when it comes to the Elliott Waves Theory.

There is a very strong possibility that when a move to the downside on the monthly chart that it will be a corrective and in the case of the complex correction we should be looking for the end of the wave X and that will provides us with the opportunity to trade with put options. Since the nature of the wave A is either ZigZag or flat, we are aware that if the wave X is simple or not it will always be a corrective wave and this will provides us with the additional information on what our next move should be.

The knowledge about whether the correction is simple or complex will provide the trader with the opportunity to determine the right date of expiration as it happens with the simple correction and in that case we should be looking for a shorter expiration date and if it happens that the market is creating the complex correction we should try to find the best longer expiration date. However, there is one issue with all of this and that issue is that we actually do not know whether the market will created the double or a triple correction and this, in turn, provides us with the insight of the importance and the power of the corrective waves.

Where to find Complex Corrections?

In majority of cases, these complex corrections are appearing when the second wave is the impulsive move and because of the alternation principle we are aware that the fourth wave will be the simple one. Besides that, these complex corrections can also be found on the leg of the contracting triangle. The main idea behind this is actually to try and identify the triangle on bigger time frame and by the time that you switch to the smaller time frame in order to make a trade with specific leg of the triangle you need have in mind that the complex corrections should be appearing here as well. It is not the official rule, however, one wave out of five different waves that make a triangle is the simple correction.