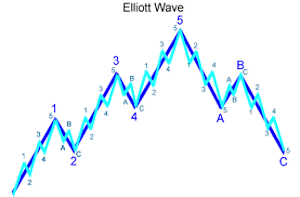 What is an X Wave?

Elliot Waves come in a 5-3 pattern; five impulse waves followed by 3 corrective waves. If the corrective wave has not met the target price, a combination of waves will ensue. An X wave (or connecting wave) happens that connects two or more corrective waves as it also makes three corrective moves to swing the trend back into place. X waves are always corrective waves. The presence of an X wave means there is about to be a complex correction. For instance, a complex correction made up of two zigzags is linked by an X wave. This pattern is the Double Zigzag. Following the same rules you can also have a Triple Zigzag where three corrective zigzags will be connected by X waves. A triple zigzag is the largest sequence possible, so two X waves are the greatest number during any sequence of waves. The ultimate goal is trading a market direction that will make it to the right side of the chart before the time period expires. This is so important, especially in Binary Options where you basically predict whether the price is going up or down during a set time period.

As mentioned earlier, X waves are always corrective waves. There could be small X waves or large X waves; these waves could also be described as weak or strong respectively. Determining if it is a small or large wave depends on the ratio of the retracement or how far it goes back toward the starting point. This is where the Fibonacci Numbers come in. Not only is the Fibonacci sequence based on the summation of the first two numbers to get the third (1-1-2-3-5-8-13-21…) it is also based on ratios. The number divided by the preceding number will yield a number very close to 1.618. In the same manner, a number divided by the next highest number will yield a number close to 0.618. This is where the retracement ratio of 61.8% comes from. It is also referred to as the Golden Ratio. There are three other Fibonacci retracement ratios: 23.6%, 38.2% and 50%. The 23.6% retracement is considered shallow; the 38.2% and 50% are moderate and the Golden retracement, 61.8% is deep.

Those trading Binary Options can benefit from the Fibonacci tool because it will help them predict where and when the numbers will hit based on the Elliot Waves and the Fibonacci.

Understanding X waves can be complicated because you don’t really know if it will be weak or strong. All complex corrections have an X wave. Simple corrections have no need for an X wave. Applying the Golden Ration will be a key in helping you know what is going to happen next.

There are a few tips and tricks that may help you as you begin to look at trending charts and apply your tactical skills.

You need to determine where the previous correction actually ends so that you can correctly calculate the Golden Ratio. Without the proper starting point your calculations can be way off.

Identifying the X wave will help you know if you should be trading the highs or the lows.