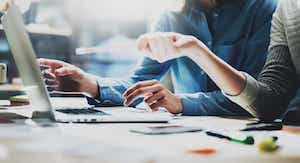 What are the Fibonacci Numbers?

The easiest way to describe Fibonacci Numbers in binary options is as a mathematical sequence. This sequence is built by adding the previous two numbers to yield the next. The sequence typically starts with 0 and 1 or 1 and 1. Starting with zero, you will get a sequence that looks like this: 0, 1, 1, 2, 3, 5, 8, 13, 21, 43, 64, and so on.

Elliott Waves are used to analyze market behaviors and from the analysis develop trends. Elliott’s premise was market prices could be predicted based on certain social principles and investor psychology. There are structures of waves that form 5- and 3-wave patterns. There are two types of waves, impulse and corrective. Five waves up followed by three waves down complete a cycle and then it begins again. There is a Super Grand Cycle that flows over centuries; there is a Sub-minuet that lasts only minutes. As it happens, the Elliott Waves Theory revolves around the Fibonacci Numbers.

In this article, we will be discussing the Flat Pattern of the Elliott Wave and how it relates to trading.

The first five waves are labeled 1, 2, 3, 4, and 5. Waves 1, 3, and 5 are moving upward (note 1, 3, and 5 are Fibonacci numbers). Waves 2 and 4 are moving downward but never fall below the lowest low, meaning there is an upward trend overall. This then is followed by three waves labeled A, B and C. They work in reverse of the first set of waves with a downward trend. Wave A moves downward, wave B moves upward but never quite as high as wave 5 and wave C drops down even farther. This is the completed cycle.

Impulse waves are the numbered waves (1-2-3-4-5) and act in the direction of the trend. Corrective waves are the lettered waves (A-B-C) and act against the trend. So, in our explanation above, waves 2 and 4 are still impulse waves because they never fall lower than the lowest low and are still moving upward with the trend. This goes for the next three waves: wave B is still a corrective wave even though it moves slightly up, but the overall trend is downward. But the whole set of waves A-B-C are corrective when compared to the set of impulse waves of set 1-2-3-4-5. It might be helpful to note that within each of these waves is another set of waves. This means there is a set of waves between wave 1 and 2, between 2 and 3 and so on. This is sort of a 3 steps forward, 2 steps backward rhythm that occurs in many relationships in nature. It shows up in the patterns of these waves proving that the stock market is not based on random or cyclical numbers, but continually follows the Elliot Wave theory and Fibonacci Numbers.

Waves at each degree:

Note the Fibonacci Numbers in bold.

There are two other terms to be knowledgeable about. A retracement is where the number falls or goes up (depending on bull or bear market) but then recovers and continues the trend. A reversal is when the number changes but does not recover and continues against the previous trend. For example if the number went from 10 to 30 as part of a growth trend but then falls to 25 and then goes back up to 30 or beyond this is a retracement. It never fell below the starting point of 10 and it recovered and started back up. In a reversal, the number would start at 10, move up to 30 showing an upward trend; it would then fall back to 25 and keep falling to 10.

There are three types of flats: regular flat, expanded flat and a running flat, which has nothing to do with driving your car with a flat tire! Just a little humor! We have already considered the regular flat. Let’s look at an irregular flat.

Expanded flats probably get that name due to the fact that in the same 3-3-5 pattern, the final wave expands beyond where the first wave started. For example, the A wave could start at 10 followed by the B wave which reaches to 25, and finished out with the C wave ending at 5. The C wave has extended or expanded past the A wave range.

The running flat is just the opposite of the expanded flat in that the 3-3-5 sequence ends short of where the A wave started. So the A wave could start at 10 followed by the B wave which reaches to 25, and finished out with the C wave ending at 15. The C wave has fallen short of the A wave. A running flat is extremely rare, but it can happen.

The more you understand about corrective waves and their consequences, the better you will have an advantage for interpreting the market. With several variations of flats, it will be in your best interest to grasp each delicate move. Over time you will begin to see the patterns that recur over and over either in an impulse or corrective wave pattern.