Final Signals is a binary robot that is said to have been created by a team of mathematicians, data scientists, financial advisors, and programmers, totaling over 80 years of experience. They had previously created trading algorithms for stock and forex trading and their latest venture is expanding their algorithm to include binary options trading as well. They claim to have made their members a total of over $14 million in profits thus far. You can view their promotional video containing all this information here.

Is Final Signals a legitimate robot that will help you with your binary options trading or is it just another scam? Read on to find out!

– Fake claims
– No real information at all provided

What is Final Signals Robot?

Unfortunately, Final Signals appears to be nothing but a low budget scam. There is absolutely no mention about how their algorithm works; they only refer to it as ‘algo-trading’ which basically means algorithmic trading and doesn’t say anything about how their alleged algorithm actually makes profitable trades. What is different about this Final Signals scam is that unlike most other scam robots which promise exorbitant returns which can reach millions per year with a 100% risk-free guarantee; Final Signals takes a more conservative approach. They only promise $1,900 a week which is much more reasonable and don’t promise a 100% guarantee.

However, these more reasonable claims are just a ploy to make their scam more believable. Final Signals appears to be a low-budget, low-effort scam, as we see by their promotional video which consists entirely of animated characters with nary a human face in sight. You would think that after advertising the combined experience of their team, they would bother to at least show their faces, but you would be wrong. At least other scammers take the trouble of hiring cheap actors on Fiverr and buying stock photos to create fake testimonials. The creators of Final Signals are so lazy and cheap that there isn’t a single human face seen anywhere on their website or video. 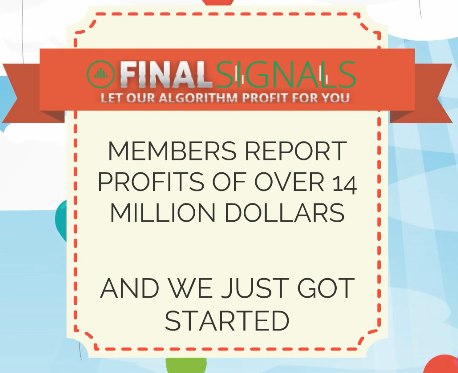 The video also claims that Final Signals members have made over $14 million in profit in total, yet on their website, in which they have a counter showing their members’ total profits, the figure stands at $12.5 million. Are they saying that they have started to lose money?

The way these scam robots operate is by offering zero cost to use to lure in customers and then making their money from affiliate commissions provided by their partner brokers when customers fund their broker account through the robot’s link. This business model leads to some pretty funny claims by many scam robots when they try to justify why they are giving their ‘100% risk-free money making machine’ away for free. They usually say that the creator of the robot is already rich and now wants to help other people achieve financial freedom or something like that. In this case, Final Signals openly admits to their business model in the video by saying that they earn via their partner brokers. Points for honesty at least.

In our case, the broker we were assigned to through Final Signals was StockPair, which is actually a legitimate CySEC-regulated broker. This is again contrary to most other scam robots, which the vast majority of the time will redirect you to unregulated brokers.

While Final Signals is most definitely just an affiliate marketing vehicle, we like that they do not make absurdly outrageous claims and at least appear to use regulated brokers. That said, there is absolutely no evidence that their software works and thus, no reason to use them.