The buzz surrounding Forex Maverick has many asking if it is a scam? Our Forex Maverick review deciphers who or what is running the company and can they be deemed a scam for being anonymous? The internet provides scammers a safe and often very secure environment within which to operate scams like Forex Maverick.

The scammers behind it seem to have a multi-pronged approach to their fictitious trading scheme with their target being newbie traders who know little or nothing about online trading. Most people have at some point heard that Forex trading and traders make money.

However, the buzz surrounding online trading has led to many criminals using it as a tool to scam people with fake software and schemes. We know from experience as traders that it is possible to make money with Forex trading. Though not everyone will end up making money.

As a matter of fact, statics show that just 5% of the people who trade will make money worth considering profitable. Everyone either gives up or fails. The Forex Maverick app tries to sell people this idea that they can’t fail when using it. However, it is just another piece of fake software taking aim at desperate or newbie traders.

Forex Maverick – Is it a scam?

In our years of reviewing various types of trading software and brokers, we’ve come across many scams, and this one seems to be no exception. The scammers have inevitably left behind a trail of evidence which can be traced back to debunk their lies.

We wrote the Forex Maverick review after thoroughly analyzing and researching everything. All the orientation material was also thoroughly read and understood before concluding that the business was a scam.

After we had watched the rather lengthy Forex Maverick pitch on their website, we had more questions than answers. For starters, it was hard not to notice that their website was of a very low quality. It seems to have been slapped together by a bunch of people who had no idea how to put up a website.

We actually weren’t in the United Kingdom when viewing the page, but they were too incompetent to program the website correctly

It also certainly didn’t reflect the type of product that they claim would generate $5,000 a day. Perhaps a poor website is one of the most compelling clues which should tell you if this is a scam.

The website is of the lowest quality we’ve seen in a while. If anything high-school kids could do a better job designing the website and probably do it for free. In addition to design, it also lacks content that offers anything of value to people on it. Forums are an essential part of a business because people can discuss the software.

Plus, it helps clarify the huge promises and perhaps provide proof to substantiate it. All you get from the website is the same rambling over and over again which is typical of a scam. In our experience, the Forex Maverick app is like every other low-quality scam we have reviewed over the years.

More evidence that Forex Maverick is a Scam

Mavericks FX is a proven scam and has left behind many people penniless. You’ll find the internet with a load of negative comments from anyone and everyone who has used the system. It appears to be very plausible that they are both associated with each other.

We have reason to believe that the same people run both scams. The Forex Maverick software is billed as being this extra-ordinary trading robot that will churn out $5000 a day, every day and five days a week. 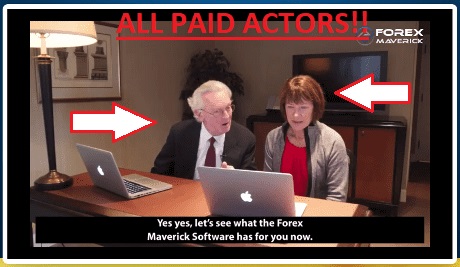 We’ve actually seen this actor before in a previous review

The other product is marketed as being some sort of investment company which they try to make it look as though it works like a company on Wall Street. They try to sell this idea that they are giving professional traders a chance to trade for them and in exchange keeping 80% of the profits.

The scam entity tries to come across as an independent business which is responsible for recruiting people who have a strong background in economics and math. All you need to get hired is to pass a very simple test during the recruitment process. After that, they allegedly award you with $10,000 in a live trading account.

Maverick FX claims to provide all members of their team top of the line training and the ins and outs of using the technology. The scam was even advertised on classified websites like Craigslist and from that’s where so many people became victim to this scam.

Eventually, people realized that this was not an employer but rather internet fraudsters who were cheating them.

What is the Relationship between the two businesses?

The Forex Maverick software was developed mainly by Mavericks FX Trading; it is the same fraudulent business that charges members $900 each week for what they call a ”dealing desk.” Here we have no idea what a dealing desk is and why a fee is charged for something that is not being provided to clients?

Forex Mavericks have over the years scammed many people over the internet which is why the scammers have mutated to something similar but not like the original. That’s how we think they got the name of the app and by their track record, you’ll be risking a lot by using the system.

You’ll never make $5000 a day by trading either binary options or Forex. As a trader, your profit is derived from the rates at which a market moves. So, when the markets are moving slowly your profits will be lower and slow to come.

When the markets are moving fast, it can take a short time to make a profit. However, even then you’ll never come close to $1000 a day unless you are a rich trader who can bankroll over $100,000. As professionals, we know that no forex trader in the retail market has access to that type of money, only those who trade for a hedge fund or bank do.

So, you need to live with the fact that making $5000 a day is a fantasy that they are selling you. The other reason is that the forex auto-trader can never guarantee a trader any kind of accuracy when it comes to making a profit.

The results shown in the promotional video aren’t even accurate

Auto traders can’t observe the factors that a human trader can. Now we are not implying that forex traders or robots are entirely useless. But we are saying that you can’t expect an autotrader to handle 90% or 100% of all trading activities and expect to become rich. Its just a recipe for disaster.

In our quest to find out if they were a chance that it was not a scam we searched for proof of live trading statistics but found none. Rather the scammers were angered by our request, and that led to us being treated as intruders.

Just because we dare to ask questions, these scammers labeled us as intruders. A closer look at the statics led us to conclude that all the figures they were providing are fabricated. The reason being that when cross-checked with other FX brokers, it appeared never to have been recorded with other brokers.

The Forex Maverick Platform like so many other scams we have reviewed is out there to make money from desperate people. The software is not anything special. Anyone who still wishes to try the system is more than welcome, but be warned that you’ll lose all your money and perhaps even end up maxing out your credit card. Even after all that spending, you’ll have nothing to show.

Forex Mavericks was not designed with success in mind, that was never their intention. We even called their customer support, and like everything else, they were useless too. Our long email with hard questions asking about proof of profitability by their so-called members only received a harsh but evasive response which is a clear indicator of it being a scam.