Can you actually profit with Freedom Circle or is it just another scam like so many other automated programs available on the market?

Founded and created by someone named Kyle Stanford, this automated software allegedly improves your financial circumstances right away.

For instance, supposedly you can make over $1300 on autopilot in just half an hour using their “free money” system.

That sounds unbelievable enough. But in addition, Mr. Stanford makes other claims that we met with a skeptical eye because they’re so atypical of what happens in the binary options trading market. And when you take a closer look at their promises, you see that it looks just like other robots designed to make only the owners money, not you. We couldn’t verify any of the claims made by the developer.

Want to discover what we did find?

Then continue reading and get a peek behind-the-scenes of Freedom Circle to uncover the system’s real deal.

Freedom Circle is really a modification of other binary options robot scams. The platform has its limits which you can’t prove or disprove without parting with at least $250 of your money first. You’ll lose that money as soon as you deposit it, and don’t expect to make it back trading with this system.

Even if you somehow make profitable trades with it, withdrawing the money from their broker will prove difficult if not impossible.

It has several features, including the standard automated function. In addition, the site supposedly offers 24/7 customer support over the telephone. But we’ve seen complaints among traders online about the lack of availability.

So, according to them, you don’t get around-the-clock support after all.

Like other trading product providers, the site offers VIP membership and a newsletter for members. But the elite membership group offers nothing special and the newsletter contains out-of-date news.

The software itself doesn’t use any new strategies despite Mr. Stanford’s claim of using his extensive economics knowledge to create it. Usually, scammers fall back on higher educational claims to give a certain impression that makes it easier to exploit new and naive traders in the market.

But that’s true of a lot of products, both in and out of the binary options industry.

So what exactly makes Freedom Circle look like a scam? 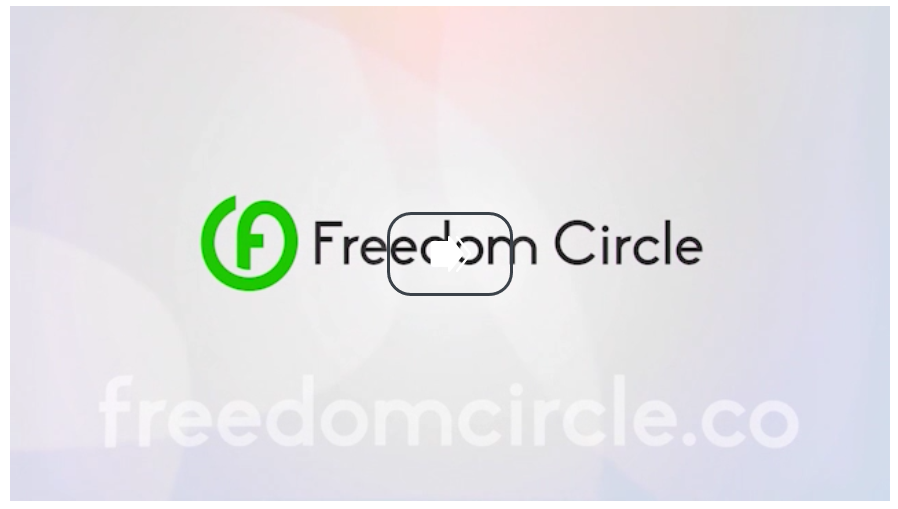 We can’t definitively prove that the individual calling himself Kyle Stanford is truly the developer and Heads of Operation behind this software.

However, he does lay claim to teaching economics at Yale University as a professor (although he doesn’t make mention of any classes he taught). That apparently gave him the expertise necessary to create his cutting edge system.

All we saw were fake reviews on Google connecting him to Freedom Circle, not his alleged former career as a professor. It certainly doesn’t help to only see a small picture representing him instead of in live action.

So why isn’t anyone talking about his former profession? Perhaps because he’s actually just a character created or, more likely, an actor hired to lie and promote the system.

Someone probably bought the photo representing him off of a stock photo site as well:

And the narrator in the video claiming to be him could be fake as well.

As we eluded to before, binary options robot developers know that saying you used to be a college educator of some kind takes advantage of sales psychology tactics on new traders. It sounds impressive to those desperately seeking riches as fast as possible. So that’s the first red flag.

Another red flag that should raise your eyebrows involves the use of a counter showing that you only have a certain amount of time to register before your opportunity disappears forever.

It won’t disappear (unless they take the site down completely). Too many marketers use this technique to pressure you into signing up to their system without thinking it through or doing your research first.

But it gets debunked as soon as you refresh the page and see the counter reset itself and start the countdown again.

Credible binary options systems don’t have to bother with advertising these types of fake limits. They don’t feel the need to put up false countdowns or limited spots to entice you because word-of-mouth and a proven track record will give them the customers they need.

Trustworthy systems also don’t need to include fake testimonials and reviews as part of their marketing. The positive reviews you see on Freedom Circle’s site don’t come from traders who’ve successfully used the system for making profits by trading binary assets.

We couldn’t get access to these so-called users to verify their testimonials: 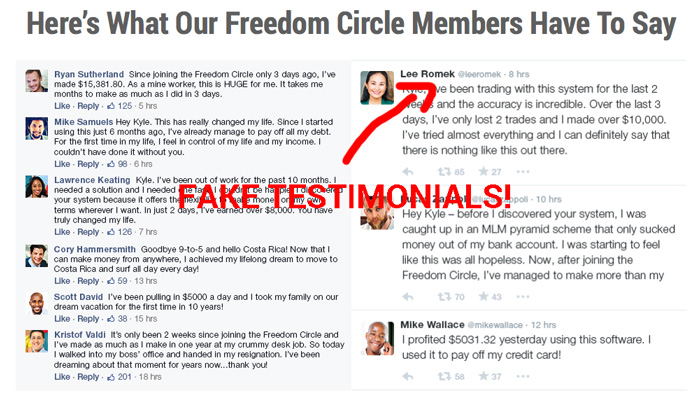 Nowadays, people posting real reviews will have a social media page or a website or even a work-related email somewhere.

But we couldn’t even find that!

Those people more than likely came from Fiverr, a gig website well-known in marketing circles for the availability of plenty of reviewers-for-hire for as little as $5. And the owner could easily create the social feeds put together on the site with cheap software.

Remain suspicious of reviews like these anytime you come across them unless proven otherwise.

The stamps and signs seen below are also another example of tactics used by shady websites.

And lastly, Freedom Circle says that they turned 178 traders into millionaires in only three months! They don’t provide any proof of this, by the way.

And they don’t provide any details about the individuals they’ve allegedly helped make rich, so you can’t really do research on them to verify this for yourself.

In the promo video, Mr. Stanford says that Freedom Circle is by invitation-only and only those in certain qualifying countries to obtain access to it. But it doesn’t look like the site actually enforces this.

So we can only conclude that it’s another marketing tactic designed to make you believe that you, as a citizen of a qualifying country, are about to join an elite group. 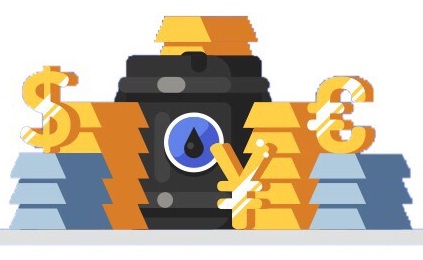 Before registering, you think you’ll get to try the system out for free. But you soon discover that you’ll have to deposit money with the binary options broker Opteck, a scammer company in its own right. They don’t have a good reputation online at all.

Perusing the web uncovers plenty of complaints about them from users which the company seems to have never addressed.

This partnership came together to rob you of your money. Freedom Circle receives a commission for convincing you to sign up and deposit money with the broker. The brokerage company makes money when you lose trades.

And the system sets you up to lose more on these automated trades than not.

So while you’re away doing whatever as the software executes trades with your money on autopilot, your funds keep dropping to nothing. And you’ll find a nasty surprise when you come back and find that the well’s gone empty. It can happen in a flash!

One of two signs of a scam can be chalked up to unfortunate coincidences. But a whole slew of them points to something else. And from out vantage point, those behind Freedom Circle (whoever they really are), don’t have your best interest at heart. They only have their own.

Since the site launched, it has received backlash from the binary options trading community.

Don’t expect to earn any income with this program or be able to withdraw your money in case you get lucky enough to beat the odds against you. They’ll willingly say what they feel they must in order to get you to spend your money on their offer.

But they have no desire to make you rich, only themselves by luring you into registering.

The website itself does nothing, either in the homepage presentation or after registration, to inspire confidence proving the legitimacy or credibility of this system. It comes across as unprofessional with too many limits for users to gain trustworthiness.

So, to review the main signs of a Freedom Circle scam that should trigger your alarm bell:

You can make money with binary options. But don’t believe the false claims of intelligence behind Freedom Circle’s software. Like a lot of binary options scams, the developers have based it on guessing not any true analysis which you can do with a broker of your choice.

You don’t have to go through theirs. You’ll only lose money when trying to trade with a live account that way.

So do yourself a favor. Learn to trade from reputable sources.

And if/when everything checks out, fund the account with the minimum deposit allowed.

You and your bank account will appreciate the care and caution taken if you follow this sound advice.