The so called Frequency Method was developed by Mitchell Simmons who boasts of it returning a 97.5% strike rate along with an invite to join. The invitation states that the individual who joins will end up making up to $1200 a day using the unique high-frequency trading system or platform.

Even though we acknowledge that the method could be utilized by large businesses to generate profits, the Frequency Method app is, in fact, a scam that hopes to maliciously piggyback off that concept. The sales pitch and wrong information is intended to mislead people and trick them into using a low-quality platform.

The Frequency Method was supposedly developed by Mitchell Simmons who with his partner came up with an app for executing very fast trades. The premise of its success hinges on the theory that the high-frequency engine works quicker than any other algorithm. Its success ensures that traders will make at least $1200 every day starting from the very first day.

Above we can see their outlandish claims

The company says that they are inviting just five beta testers to check out the software and make money in the process. Unfortunately, our research suggests otherwise and exposes the truth behind this scam which includes a lot of negative feedback and people losing lots of money. We uncover the truth about the Frequency Method below.

The creator of the method Mr. Simmons claims to be some sort of math system developer working for some of the biggest and apparently very profitable high-frequency trading companies. Interestingly, he does not name any company and rather hides behind a so-called confidentially agreement.

If he did name specifics, it would be easier for investigators to check and see if he was, in fact, telling the truth. High-Frequency Trading or HFT as it is called is a very popular trading method and has recently entered the binary options trading industry.

Interestingly, the creator wants us to assume without proof that some of the best trading companies in the world use his so-called High-Frequency Engine to make money. So, that led him (the founder) to partner with his high school buddy Joshua who is supposed to be a binary options wiz.

Why we think Frequency Method is a Scam 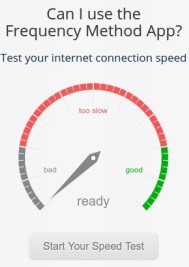 The whole story of Mitchell Simmons and Joshua combining their expertise to come up with a highly profitable HFT platform is only plausible if you don’t look into the system any deeper.

The only sales pitch that they give is that the platform can help traders earn $1200 every day but with no background of how that’s even possible. They also claim a fast internet connection is essential, as seen in the image to the right. Somehow, we always passed the test, no matter how fast our connection was.

The other part of the story that’s hard to swallow is the 97.5% strike rate. The figure has not been verified either by another trader or any independent testing parties. Though the website itself does have a couple of glowing testimonials which are paid for and fake to make the case that the system works.

In reality, users lose money when they use the Frequency Method Trading software, and that’s no secret, as seen by:

How do we know that for sure? Simple! Because it shows trading activities of major currency pairs over the weekend. But any trader knows that markets are closed over the weekend. So, all the profits that are supposedly being shown generated in real time on Saturday and Sunday is a clear sign of fraud.

An example of a paid actor being used in their testimonials.

All the video testimonials talking about success are fake because these are paid actors and not real traders. The actors hired are reading from a script in an attempt to misguide traders with lies. We suspect that these cheap actors have been hired from Fiverr.com, just to sell this fake software.

The reality is that Frequency Method is an awful scam with Mitchell Simmons and Joshua being bogus names given to hide the real scammers behind the scheme.

Over the years the vast majority of scams we have exposed use fictional names and hired voice narrators to give their schemes legitimacy. Since the people behind this are hiding behind anonymity, the individuals who fall for this scam, unfortunately, don’t get any response from the so called Frequency Method Support service or the founder himself.

Also, we seriously doubt that this app will ever be launched and priced at $24999 or a $1999 a month startup fee. The bad track record it has garnered should ensure that people don’t end up paying this insane amount for such bad software.

Finally, since nobody knows where the company is located, let alone where Mr. Mitchell, the so-called Head of Quantitive Research is based we suspect it’s a mere fantasy.

The various suspicious aspects of this system, outright lies and none existing trading standards leads us to believe that Frequency Method app is nothing but a scam. A real service looking to boost credibility would never resort to trickery by using false histories and a fake founder.

Any newbie trader is much better off trading with real, legitimate software than blow their bankroll on a scam. The highest win rate we’ve heard is nowhere close to the 90% that the scammers lead people to believe is achievable. Save your money and learn how to trade with real strategies, that’s the only way to become successful.