GatesWay software is, unfortunately, one of those binary options brokers who bank on the name of famous people to take advantage of those who are unaware. It is not only an unethical practice but can be considered illegal in many countries around the world.

GatesWay had surprised us in many ways but perhaps most of all in the way it is scamming people. Our immediate reaction as professionals was to expose the scam and its dangers especially because it was exploiting the reputation of Bill Gates. Not to mention aligning fake partners Peter Collins and Michael Yantier to further their malicious agenda.

Our full review below exposes what GatesWay binary options trading is all about. Why it is a scam system and why it should never be trusted. Once you read this review, we are hoping that it will save you from a lot of heartbreak and financial losses in the future.

Perhaps the most significant contention we have against GatesWay is the fact that all the claims they make are fake. For starters, it wasn’t developed under the guidance of Bill Gates, as it is claimed.

The creator of Microsoft will never work with unknown developers on an unnamed project. Plus, the founder of Microsoft has never traded binary options in his life. Though the scammers have stolen Mr. Gates identity to give their fake software authority.

Then comes the Ted Talks Conference video which has been ripped off. The video was shot back in 2015, and the topic was “The next outbreak? We’re not ready”. You can Google the video which is a fascinating watch but does not talk about trading. Though these scammers have used an anonymous voice over the video to mislead visitors watching it.

So, its safe to assume that Mr. Michael Yantier who is supposed to be the project manager of the GatesWay system and Mr. Peter Collins who is claimed to be head of debugging and testing are fake. Not only are the names false but so are their credentials.

You shouldn’t trust anything that GatesWay claims because its all a lie. They are misleading people just so that they can rip them off financially. If you are looking for a good investment or trading solution we have reviewed many great ones which you can check out.

Signs that Gates Code Project is a scam

Now in addition to stealing Mr. Gates’ identity to mislead people the software claims to use artificial intelligence or AI as its called. The AI is said to aid with auto trading, being able to place a couple of trades a day which are capped at $200 per trade. At this rate ($200) your account will be depleted in mere minutes because obviously, GatesWay is nothing but a scam. 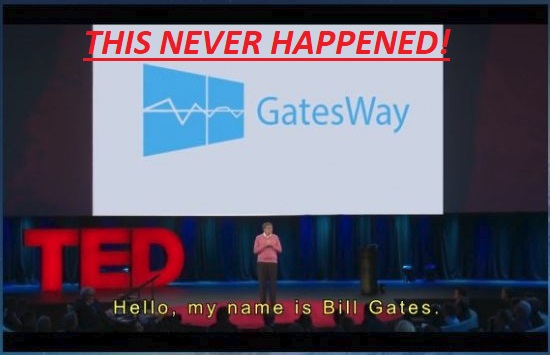 The website tries to use this image in their favour, but Bill Gates never mentioned this system

All the feedback and testimonials on the website are fake. These people have been paid to leave positive reviews, and so everything said is a fabrication. The same goes for their promise of being able to make $1,455 a day.

Traders are expected to make a minimum $250 investment to start trading via the GatesWay platform. But that’s just enough for hardly one trade. So, you should be very cautious and not add any money. Perhaps you can joint and just test out the platform for free but never add any money because you’ll never see it again.

GatesWay is a trading software which masquerades as something unique with value, but in reality, everything about it is a lie. Starting from the claim that it was worked on by Mr. Bill Gates to it help you make millions. The video you see is a stolen from Ted Talks conference and then doctored by the scammers.

The testimonials are paid and so without credibility. So, there is no way for anyone to verify if, in fact, this robot will work. But since they are lying every step of the way its best to stay away from it.