The Hedge Formula is a binary options robot that claims to be able to make its users over $10k a day with a 98% success rate. Is this even possible? Check out our full review to find out!

The Hedge Formula is a piece of software created by the Hedge Formula Group which is headed by George Dalio. George claims to have created the software that has a 98% success rate and can generate over $10k per day! Of course, he is only sharing his system with a select group of 100 people. You can view part of their promotional video here.

So is the Hedge Formula software a scam or the real deal? Read our answer below!

What is the Hedge Formula Robot?

It should be no surprise to our readers that the Hedge Formula Robot is a scam. One look at their claims: over $10k a day with a 98% success rate should tell you that as those claims are totally impossible in the world of trading, regardless of financial instrument. And while you might argue that you can indeed make $10k a day trading, yes that is possible, but no one is making that amount from a minimum $250 deposit.

The promotional video for the Hedge Formula is chock full of actors, both real actors and cheap ones from Fiverr. Fortunately, we managed to identify nearly all of them, and if you’ve read a few of our scam robot reviews, you will definitely see a few familiar faces. 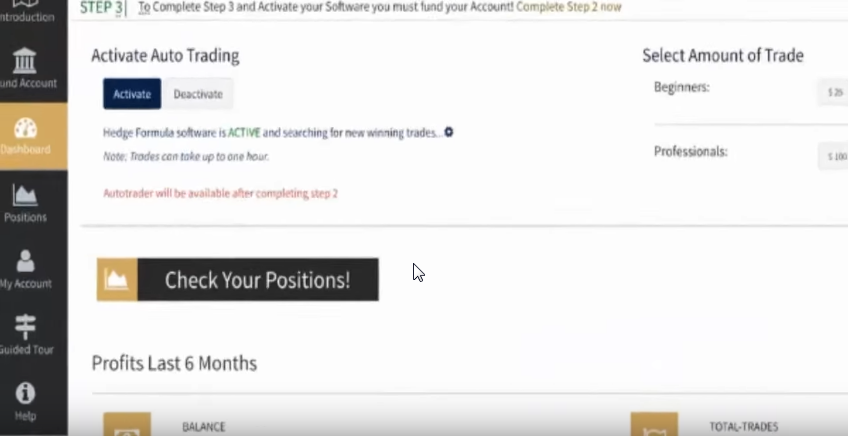 First, let’s take a look at George Dalio, whose last name was probably stolen from real life hedge fund manager and billionaire, Ray Dalio. George Dalio is actually an actor from Portland, Oregon, the shooting location for way too many of these high production scam videos and his real name is Doren Elias.

What we find funny is that while the scammers have obviously gone through a lot of effort in this video (more than the majority of other scam videos anyway) they did not bother to properly doctor (i.e. Photoshop) their account balances page properly! Check out a couple of the screenshots and pay attention to the lines that say “To complete Step 3 and Activate Your Software you must fund your Account!” and “Autotrader will be available after completing step 2” indicating that these so-called account balances are just doctored images on unfunded accounts!

If you want to know how the Hedge Formula software works, don’t bother because it is most likely just a generic automated trading software that is reused over and over again in the scammers various scams. As for how these scammers work, the real source of their income is affiliate commissions from their partner broker, which is why these robots, which can supposedly make you a boatload of money with zero risk, are almost always free. The scammers receive their money once you fund the trading account with the broker after going through the robot, and thus by the time you find out their robot doesn’t perform anywhere close to as promised, it is already too late. Plus, since it’s free, people find themselves with no avenue to complain.

When we tried to sign up with the Hedge Formula software, we received an error message and were unable to be redirected to any broker, indicating that the scammers behind the Hedge Formula have already moved on to their next scam.

The Hedge Formula software by the Hedge Formula Group is bogus and phony. There is no such company and all you get are faceless scammers hiding behind actors. The only formula in play here is the scam formula that these scammers keep repeating ad nauseam. Don’t even bother with this one.