We ran into the HTF Finance app which promises to help traders make millions. However, before we get into details, it’s important to report that this is another scam. HFT stands for High-Frequency Trader Finance and is a so called top notch trading robot. That said our observation of this robot in action is that everything about it is fake.

The creator of this scam claims that it is some sort of advanced trading robot because it trades using a series of highly complicated and very sophisticated mathematical algorithms. In our opinion, it’s just the creator’s way of dodging a question about how can the robot be so accurate.

The claim is also made that it will not lose a trade, but in fact, all scams make that promise. Though according to the creator of this scam it is because of its high accuracy which ensures it never misses another trade.

We were quite amused by some of the other outlandish claims made by the creator of this robot, but we also discovered that they were not true. Despite declaring HFT Finance a scam, our review will outline why we think it is a scam and its mechanics.

Knowing this will help you avoid other similar scams in the future. The claim is that you will become a millionaire in mere days with this supposed unique software that focuses on high-frequency trading.

High-frequency trading means being able to execute trades at a rapid pace. The speed offers an advantage when supposedly compared with conventional trading strategies. However, we have discovered that many scam creators are using this so called high-frequency sales pitch to deceive newbie traders.

HTF Finance’s author claims that he put in millions to create the robot and despite that is giving it for free to the binary options trading community. But we discovered that even the claim of it being free is untrue.

Why would anyone spend millions to create something only to give it away for free? This does not make any sense, and it only goes to show the lengths to which these scammers will go to defraud you. It seems as though scammers will make any promise to get your money which is why it’s important to be careful.

Proof that HFT Finance is a Scam

No serious mathematics goes into this system

The robot has been created by a guy named Steve. However, we were unable to uncover his real name because it’s well hidden perhaps. The claim he makes is that the system can help generate $90,838 every trading day using the robot.

After checking the testimonials, we can say with certainty that this is not the case. The author of this robot has put up a lot of other misleading information which we will continue to reveal as we move on with the review.

The information we have is significant enough to indicate that it is a big scam. Some of the most startling information is presented in this HFT Finance review.

Steve is, in fact, the person who is said to have created this trading robot. Despite a lot of research put into this review, we were unable to find any information regarding Steve’s background as a trader or his experience in the financial industry.

We checked all major social media platforms like Twitter and Facebook and found nothing. Also, after checking publications and websites, we still turned up short. Even a Google search revealed nothing.

We have no proof that this person is who he so proudly claims to be. We used a reverse image search to check the photo and found that the picture was ripped off fiverr.com and belongs to someone who is not a trader.

This person was probably hired from the website, and because of that, he can’t be a professional which means that the whole story being told is a big lie. Also, a sign the HFT Finance robot is an elaborate scam.

No, it does not! That’s the short answer. The longer answer is that the software does not function the way Steve says it does. After watching the sales video, and the presentation made by the CEO Steve, it is clearly evident that it is nothing but a scam. Any experienced trader can watch the presentation and figure out that Steve knows nothing about trading and if anything is reading from a script. 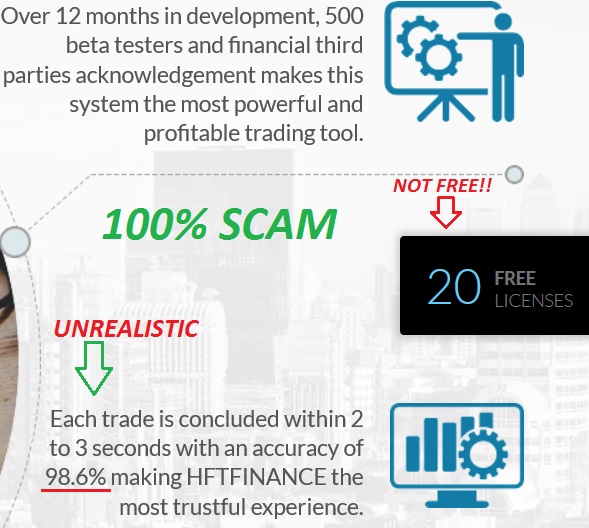 The descriptions laid out in the video will give you the impression that perhaps he is talking about some other software and not HFT Finance. The claim is that the system is very efficient because it has the ability to make hundreds of trades a minute. But that’s also unclear because even after running the algorithm through our heads it does not make sense.

The claim of millions to be made

HFT Finance claims that traders can end up earning as much as $9K a day if not more by simply letting the robot run during a trading day. The video review claims to have made several people millionaires over the course of testing it.

As professional traders ourselves we can tell you that the claims of this type of profit are not realistic. Also, it claims that you will not lose a single trade to justify this kind of earning.

We would have to assume and believe the claim made by Steve that HFT Finance is 100% ITM (In the Money). But the system is still left unexplained, and they try to confuse people so that nobody asks questions.

Nobody we know can tell us without a shadow of a doubt how the system is supposed to work. In our experience you will not earn anything, as a matter of fact, you may end up losing all the money you put in because the scam brokers they recommend will run away.

The other thing we noted is that all the testimonials on the website are fake, to begin with. We went through all the testimonials and can say for sure that these were not written by traders. So, it’s obvious that this Steve guy went on Fiverr.com and hired a couple of writers to do draft the reviews. Even the evidence provided is fake.

To start with the people providing the information are scammers and shouldn’t be trusted. Secondly, we can tell you that they are not professional traders and so their word is not worth anything.

You shouldn’t believe the so called evidence provided by these people who are not even traders. Take a look at the pictures, and it’s not hard to figure out that these are not the people they claim to be. Again the images are stolen same as the CEO’s. All of this indicates to HFT Finance being a fraud.

Scammers don’t give you anything for free

The claim is that HFT Finance is provided to you for free despite it having been developed after spending millions in research. But why should anyone give anything that really works and that too has the ability to generate millions for free? If anything this alone sets off all our alarm bells because the robot is fishy.

People setup businesses and develop products to make money not give it free. But if you look closely it is a tactic to convince people or more like forcing them to use the robot. Again it is not given to you for free because you are expected to spend over two hundred and fifty dollars before even getting access to it. Which brings us to our original conclusion that the system is a scam designed to get money out of you.