We ran into the Lazy Trader and decided to review it in detail for everyone’s benefit. The Lazy Trader is a trading robot which promises traders will make $15,000 a day at the very least. But the app is a scam!

What alludes to it being a scam for starters is that the official website claims that you can make money risk free and without having even to lift a finger. These statements are unusual especially since traders know that there are always losses when it comes to trading binary options.

Any experienced trader will tell you that there is no such thing as risk-free trading. All the ’get rich overnight’ schemes including the Lazy Trader software is part of an elaborate scam. Unless you intentionally want to get scammed for some reason using the app or even considering it is pointless.

Lazy Trader is a Scam: Here’s The Evidence

Fortunately, for many of us recognizing a regular binary options scam online is easy. So, figuring out if the Lazy Trader software was a scam didn’t take much time. The sketchy promotional video and haplessly strung together website is enough to draw attention to the system’s inadequacies.

We were instantly able to draw the conclusion that the scheme was a complete lie as soon as an expensive sports vehicle was shown being driven by an actor who called himself Rick Daniels. Every word out of his mouth was almost anticipated by our team and started with without a doubt reflecting upon his academic background.

Like everyone else, he claimed to have dropped out of university but was a math whiz of sorts. It’s the same old lines that we’ve heard before from other scammers in this industry. Everything he said proved that the Lazy Trader was designed to fool newbie traders. 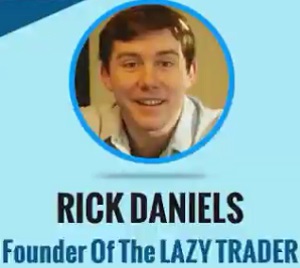 The supposed creator of this system can be seen above

The vast majority of scams out there use a single desirable point on which the entire scam is based. In the case of the Lazy Trade Robot, it is the promise of making huge profits in as few as five minutes after they signup to the system.

The million dollar question though is who would want to waste $250 on some random scheme on the internet that may or may not help them make $15K a day? Well nobody is the answer!

And if anyone were to be convinced of the idea they would want to know how the system exactly worked to make that money. But that’s the information that the Lazy Trader’s website seems to leave out in both the video and on the website.

Interestingly instead of focusing on the most important piece of information which would make the robot probably the most successful in the world, the founder Rick Daniels takes us around in circles. There is guarantee after guarantee that you’ll make $15K a day and there being no risk, because of its 90% success rate.

The average person is certainly not a math wiz or a technical genius. But knowing some of the basics of how the system works is important, and it goes for any product that you’re trying to sell. That’s common knowledge. But it seems that the Lazy Trader’s founders are oblivious of this fact.

The even scarier part about this is that you need to trust your money to an automated system and to have no idea as to how the system works. If anything we see it as a hard gamble. This happens to be the most fundamental point that we look at and find in the Lazy Trading app. 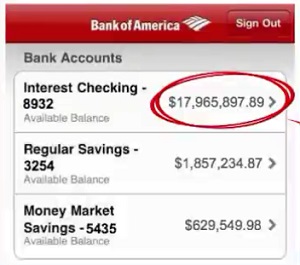 There’s no way anyone would make any money using this system, let alone such outlandish amounts

The very first thing you’ll notice upon landing on the website is the claim that anyone can make $15,986.7 a day using the software. Plus, there is a special script, which counts each calendar day/date so that the claim can be made against the right date.

Interestingly if the figures they mentioned were real, then the Lazy Trader’s app would probably be the most popular on the internet with everyone using it. Lazy Trader would be featured in every business magazine in existence.

But the fact is that the claims are unconfirmed, and our investigations have revealed that the software is not popular on the internet except for within the app’s official website.

To save you time from having to read lines of text the short answer about the the Lazy Trader’s app being worth it is that, it’s not! But then again that’s a standard response we give to anyone who wants to find out about a scam website which in most cases hires cheap actors to lie and cheat for a few dollars in front of the camera.

The indisputable proof of the Lazy Trader app being a scam can be found embedded within its promotional video. It’s clear that they are playing mind games with people wasting their time on watching the video.

A fake number, and a very common marketing tactic for such schemes

Take for instance the fact that the pictures you’re shown in the video are not representative of the real Lazy Trader app. So, that’s the first indication of foul play. The other part that makes us suspicious is that you have to pay $250 to activate the app.

If they really want you to use the app, how difficult can it be to create a free or demo version of it? That leaves us with more questions than actual answers.

If you end up deciding against taking our advice and risk your money by paying $250 for this app, you will soon come to realize that mainly binary options scammers use the software to fool people.

The very same system was in the past used to steal a lot of money using robots with different names like Aurum Tech, Wall Street Focus Group and Quantum Code amongst others. The only thing that’s changed is the logos and their colors!

Lazy Trade Robot makes use of fake testimonials to fool people into thinking that the software works. The testimonials are by fake actors. The fact is that nobody knows the identity of the real owner behind the Lazy Trader app.

The person who introduces himself as Rick Daniels is an impostor. The same goes for every other individual named and photos included who advocate on behalf of this scam in the video reviews.

Scams, in general, have managed to make use of rented facilities which once again is used to fool traders who are desperate to make a lot of money. The more you are led into believing their stories, the more you’ll be steered away from reality, and that would put you at risk of losing your money to these scammers.

Conclusion – Stay Away from Lazy Trader

The Lazy Trader scam ensures that you get nothing out of it. You’ll never have a fancy car, a holiday home in the Bahamas or a mansion if you use this trading robot.

We are trying to help anyone and everyone reading this to ensure that they don’t lose their money to yet another fraud going by the name of Lazy Trader app software. If anything the word ”Lazy” in the name should have set off alarm bells anyway.