Every now and then we come across a blatantly awful scam like Leaked Profits. Nothing about Leaked Profits is genuine, as a matter of fact, we challenge anyone to find something positive about it.

We were able to find literally dozens of instances and reviews from people saying that it’s run by criminals. Our goal with this review is to expose the crooks behind this scam and how they lie about anything and everything to sell it.

Not to mention the fact that they are using false reviews doctored from leading financial newspapers. If anything this type of blatant scamming should have the authorities on alert. One thing is for sure that the Leaked Profits software has and will continue to rip off people for years to come.

Leaked Profits app is a scam and it’s very similar to many other scams that use a fictitious story coupled with fake names to push their agenda. The scammers don’t go into much detail into how the software works or who Frank Bishop is in real life. But we are led to believe that he is some Wall St. Trader who was hugely successful and developed software capable of delivering a 97.2% win rate on all trades.

Apparently, traders can make around $1250 a day using it…at least that’s what they promise. We will go into why these figures are bogus in a short moment, but for now, let’s focus on Mr. Bishop. The claim is that he is a well regarded financial expert so with that in mind we think that there should be some reference to him on the internet. 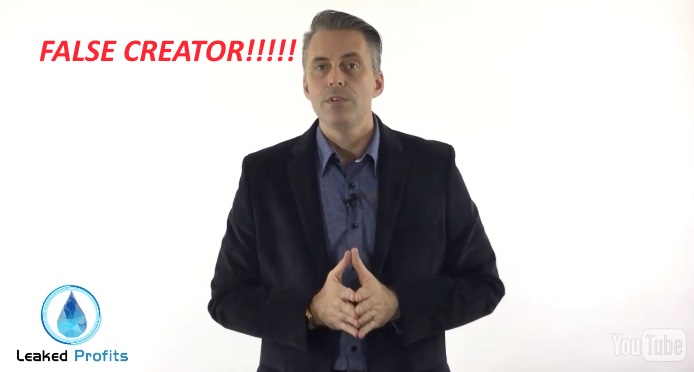 After a bit of research, we were not surprised to learn that nobody has ever heard of this so called high profile investor named Frank Bishop. Searching for his name online led us to various forums filled with furious people who were talking about how the Leaked Profits system was a total sham. Obviously, this name is synonymous with financial fraud more than success!

The Leaked Profits promotional video which you can find on the main website shows that Mr. Bishop is interviewed by a reporter on CNBC. we’re also shown the web page and a so called successful book named ‘Happy, Lucky and Rich.’ However, if you do a bit of fact checking it’s not hard to find that CNBC has never interviewed anyone by this name and there is no such book in existence.

It goes without saying that the CEO Mr. Bishop, of Leaked Profits, is a fictitious character thought up by a scammer who wants to hide his real identity. Many scammers like the case with Leaked Profits hire cheap actors for this purpose. However, all of what they state is so false that it’s instantly visible to anyone who is willing to look beyond the slick home page.

Leaked Profits promises that traders can make around $1000 a day owing to the software’s nearly 100% success rate. Also, the software works on autopilot, and so it does not require any input from people using it.

Now if anything this sounds way too good to be true, which we’ve mentioned above is! What the scammers are doing it saying that Leaked Profits will deliver a certain win percentage which is impossible, while also declaring an average daily earning.

Interestingly this isn’t how things work, and any trader with some experience knows this for a fact. The scammers know it too, but they want to lure people into their trap by throwing around unsubstantiated figures. People have grown accustomed to trusting numbers which is why most scammers rely on these figures to fool people instead of providing solid evidence.

As usual, the banner section of the website is full of lies

The legitimate binary signals trading services try to provide as much evidence as they can. These genuine services back up their claims with performance stats, proof of profits and a demonstration of their software. Also, most of these websites consist of a few dozen pages, to say the least. On the contrary, the Leaked Profits website is thin, to say the least.

We were not able to find any evidence that Leaked Profits could provide the type of returns it promises except for in the fake testimonials. The other thing worth noting is that a genuine service will not and never promise an unrealistic returns figure.

Why should You Not trust the Leaked Profits Software

Mr. Bishop claims that the Leaked Profits app is exclusive, revolutionary and ground breaking, but in fact, it is nothing even near decent when it comes to helping traders make money. When we examined the software closer, it was not hard to notice the uncanny resemblance that it had with other discredited software associated with many other scams for a long time.

The Leaked Profits software is without a doubt the same scam software used and sold multiple times before but with just a fresh coat of paint so to speak. Under the hood, it is the same software which is why it cannot be trusted. We’d advise against even installing it on your phone, computer or tablet PC.

It wasn’t seen in The Wall Street Journal

Leaked Profits is supposed to be a fully automated software, which obviously does not require any human intervention. It burns through a trader’s investment within a few minutes as opposed to trading anything on the market.

So, the money is technically ’skimmed’ and cleverly redirected into the scammer’s account which is untraceable. The official website is nothing more than an affiliate marketer’s attempt to earn a commission by referring leads to unregulated and often blacklisted brokers.

The brokers and associated, affiliated marketers are crooks because as an investor you have no say in what happens to your $250 minimum deposit. So, as soon as that money is deposited it goes into the hands of the scammers. Don’t expect to see this money again. Leaked Profits reminds us of the Tesler App which works in a similar manner.

By now you already know that Leaked Profits is a complete and utter scam but let us take things one step further and examine the glowing testimonials that they show off on the website. We went ahead and ran a reverse image search via Google of the profile pictures of those who left testimonials on the website. Apparently, these scammers are using other people’s pictures from the internet.

If anything these fake testimonials are not even worth reading because they are all pretty much the same thing. But then again as seasoned reviewers, we have encountered many similar scams using the same tactic. So, once again we’ve debunked yet another one of the elements that Leaked Profits uses to give themselves an air of legitimacy.

Another point we’d like to make about these testimonials and software is the claim that Leaked Profits has been in use for four years and has thousands of investors as clients. Though running a reverse domain check revealed that their main website was registered in 9/02/2016. Again this further goes to show the extent to which these scammers will lie and cheat people.

Our review of Leaked Profits should be enough proof to dissuade individuals who have being considering this app worthy of their investment. But we can tell you without a doubt that Leaked Profits will not help you make a single dime, so any money you invest is gone forever.

Leaked Profits is not the most sophisticated scam we’ve seen, and so it is important that people be aware of these types of scams and techniques used by the scammers. If anything you’ll want to steer clear of it at all costs and rather invest in something that actually works.