If you believed that the long line of country-coordinated Scams would end with the Singapore Method, also known as the Malay Method, you are highly mistaken. Jake Shen, (if that is even his real name) and his notorious band of shady internet marketers need to stop introducing worthless software in the market.

We’ve grown tired of seeing consecutive scam applications, each bogusly claiming to be better than the others. Although we know that anything that has been created by these people is sure to be a scam, but there is always a number of beginner traders who fall prey to their lies.

We have already exposed most of their fraudulent services, including the Saffa Method, Sydney System (Review), and now it’s time to shine a light on MalayMethod.com; their most recent scam. All of these apps are equally fraudulent and treacherous, and were derived by the same individuals who constructed the Aussie Method; the fraud that caused severe losses more than a year ago.

Malay Method is introduced using the same scam tactics that were used for the other scams; like using a deceiving introductory video featuring paid actors. This review is for all the traders who want genuine facts regarding the Malay Method and whether it is capable of generating any profit.

There is a little confusion regarding who is actually responsible for producing this scam. The video presentations include a voice-over, who identified himself as “Jake Shen.” But then, the description area underneath the video contains a bio that was cloned from associated scam sites and refer to the individual who ‘uncovered’ ways to earn millions using the binary options trading system.

Anyhow, these conflicting facts add to the suspicions created by a lack of credible or visual confirmation, regarding whether the identities actually exist. From what we have been able to gather so far, we firmly believe that Jake Shen and all other individuals mentioned by these scammers are merely fabricated identities. 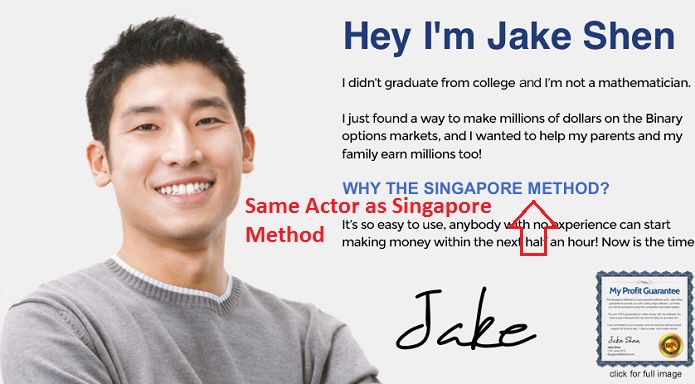 The supposed creator of the Singapore Method just happens to be the same one as in the Malay Method?

These fake personas greatly benefit these scammers by providing a cover for the producers, when they decide to disappear with all the funds that are deposited in their scams, leaving traders penniless.

Malay Method – The Same Scam With Nothing New

Here’s what we believe so far. The Malay Method is a recent addition to the long string of scams that started with the Aussie Method over a year ago. Over the year, the scammers behind the curtain have expanded their focus to target inexperienced traders from different countries and regions with their ’innovative methodologies.’ The UK, Canuck & Saffa Methods scams preceded the Malay Method, and if you visit the sites associated with these scams, you’ll find them all weirdly identical to each other.

Even the advertisement footage featuring paid actors from Fiverr is similar, the only minor changes are the names of the scams and domain pages. A large number of day traders have testified to bearing huge losses while using these scam profit-generating schemes.

One thing is for certain, the Malay Method is NOT a money-making app, and should not be entrusted with funds unless of course, you have a weird desire of giving your money away to these scammers.

These con-artists persistently refuse to stop introducing their ‘updated versions.’ However, have altered their strategies slightly and in addition to using a country based approach, are focusing on specific cities to entrap a higher number of victims.

We doubt this man is actually called Jake Shen

Those who are familiar with the binary options trading system can easily recognize the Malay Method as a fraud. However, for the sake of those unfamiliar with the scamming tactics, let’s review another piece of evidence which highlights this whole software as a total scam.

A genuine money making app does not require fake and fabricated testimonies. If a software requires paid actors to promote the app, you can easily guess its efficiency level. In any case, an authentic money-making software can produce glowing reviews only by generating the promised level of profits, which, these scammers are unable to achieve.

When you visit the Malay Method’s website, you are immediately presented with multiple testimonials that boast of the app’s ability to generate huge profits. For instance, consider the testimonial review of a young man shown on the website.

It may seem charming and convincing, but the fact is that this person was spotted providing positive reviews for many other scams including Millionaire Bot & Money Matirx, Marvins Secrets, and Sydney System. For further proof, you can view his Fiverr.com acting profile gig here.

A very tempting giveaway trap is used by these scammers to convince traders to invest. A gift of $10,000 is to be provided to anyone who registers with London System App or fails to generate at least a six figure profit within four weeks.

Jake Shen is portrayed as an honest man who seems to offer free gifts, what most people don’t realize is that this attractive offer has a downside to it. This ‘kind-hearted’ offer is actually a partnered broker derived bonus proposal with some strict contingencies.

Thus, to avail the offer of said ‘giveaways’ and to be able to withdraw funds, traders are required to maintain a significant trading volume percentage. In short, when traders finally realize that they invested with a worthless scam that is capable of generating nothing but loss, withdrawing funds become nearly impossible as this scam requires completion of specific requirements before funds are released.

Jake Shen is one among the thousands of greedy con-artists who have infiltrated the trading market to rob your funds. All his software are as good as garbage and can do nothing but make false assertions. Refrain from entrusting your funds to these scammers because you are definitely going to regret your decision in the future.