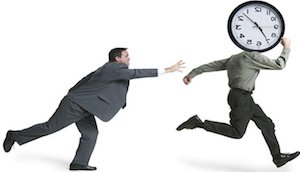 To be successful at trading binary options, it is imperative that you understand how to measure and take into account the time element in your technical analysis patterns in order to set the optimal expiration date of an option. It is not sufficient to simply predict the price movement of each asset; you must also understand when such price movements will happen and when they will reverse.

In today’s piece, we will be showing you 2 different chart patterns: triangles and pennants. We will explain what each pattern means and go into how to measure the time element in each one.

A triangle pattern is formed by two trend lines that when plotted form the shape of a triangle. There are 3 types of triangle patterns: symmetrical, ascending and descending.

Now we have the ascending triangle. Notice how the bottom trend line trends upward but the top trend line does not trend downwards. This means that when the pattern is complete, the price is likely to break out in the upside, creating an opportunity for traders to take advantage, in this case by placing a call option. Of course, by the time the price has broken out of the pattern at data point ‘g’, it would already be too late. Therefore, the call option must be placed before the price has broken out; traders should be able to recognize that an ascending triangle pattern is forming and place the call option before the pattern is complete.

If the call option is the right move here, what would be the appropriate expiration date of said option? To determine that, we have to be able to measure the time element within the triangle pattern.

In the chart, each ‘candle’ represents a certain trading time period, in this case, a single trading day. That gives us a measure of the time element; therefore, by counting the number of candles between each data point i.e. between ‘a’ and ‘b’, between ‘b’ and ‘c’ and so forth, we have the time element.

Because of the nature of a triangle, wider at the base and getting narrower towards the apex, the time element also tends to get progressively smaller. This means that upon recognizing the pattern of an ascending triangle, you should opt for a call option with an expiration date that is shorter than the previous time element between data points.

Now based on the chart example, this may be confusing because the pattern breaks at point ‘g’ and the price keeps increasing so a longer expiration date would also have been profitable. However keep in mind that there is no way to know exactly when the pattern would break! In the example above it could have broken at a theoretical point ‘i’ instead as plotted below.

In the hypothetical example above, the pattern still keeps within the ascending triangle pattern but only breaks at a later stage. So if you had a placed a call option between points ‘f’ and ‘g’ with an expiration date greater than the time element between points ‘e’ and ‘f’, there’s a good chance your option would have expired on the downtrend and you would have lost money instead.

And, finally, we have the descending triangle. In this case, the bottom trend line is flat while the top trend line is heading downward meaning a price breakout is likely on the downside. Same rules apply as the ascending triangle, only this time you would be placing a put option instead of a call option.

At first glance, a pennant resembles a symmetrical triangle. However, there are some key differences that can be best illustrated with the following analogy: triangle patterns are just a flag, while pennants are a flag plus a flagpole.

In terms of the time element, triangle patterns tend to form more over the medium to long-term while pennants are mostly short-term patterns. Given that binary options trading tend to be more short-term plays, being able to spot pennants will be a highly useful ability. The rules for the expiration date of the option applies the same as triangles; set the expiration date shorter than the time element between the previous price movements.

Recognizing fundamental chart patterns is important in recognizing the direction of future price movements while understanding how to measure the time elements within each one is important in order to be able to set an optimal expiration date strategy for the option. That said, all traders should be aware that technical analysis isn’t 100% perfect and there are no guarantees; technical analysis should just be one tool in your trading toolbox.