Mirror Trader is the latest binary trading robot that claims to work by replicating the successful trades made by its creator, John Harrison. Mr. Harrison purports to be a former owner of a computer network company that served large banks on Wall Street. He noticed that the traders relied upon the speed of the networks he installed for the banks, as they practiced what is known as high frequency trading. The banks were using an OC3 optical carrier however Mr. Harrison noticed that had the banks had a faster connection, their profits would be even larger. So, he began trading on his own using a much faster OC192 connection and soon discovered great success. Of course, he now wants to share the system with a select few, not for money of course, but out of the goodness of his own heart. You can find the full promotional video for Mirror Trader here.

So is Mirror Trader a legit robot or just another scam among many?

What is Mirror Trader Robot?

Unfortunately, Mirror Trader is just another scam, and a rather poorly executed one at that. The first thing is that their claims of over $14,000 in profits per day on the back of $300 in deposits, is simply pure fantasy. For reference, that is over $5 million per year! There is no legitimate system that will be able to generate such profits for you, especially on the back of such a small deposit and the fact that the creators of this scam expect people to believe such claims is simply laughable and shows just how little respect they have for your intelligence. While it is true that high frequency trading exists and is a real practice, there is no such thing as ‘100% risk free’ and guaranteed profits, otherwise the big banks would not be in so much financial trouble as they are now.

You may have noticed that in the above promotional video that Mr. Harrison never makes an appearance. The reason for this is that firstly, Mr. Harrison doesn’t exist and the video above is in fact the second promotional video shot for Mirror Trader. They had a previous video, with an actor playing Mr. Harrison, which you can view here; note how perfectly the narrative in both videos match up. Of course, Mr. Harrison was quickly exposed as an actor, who has also been the face of a couple of other binary options robots scams, namely Push Money App and Aurum Tech. 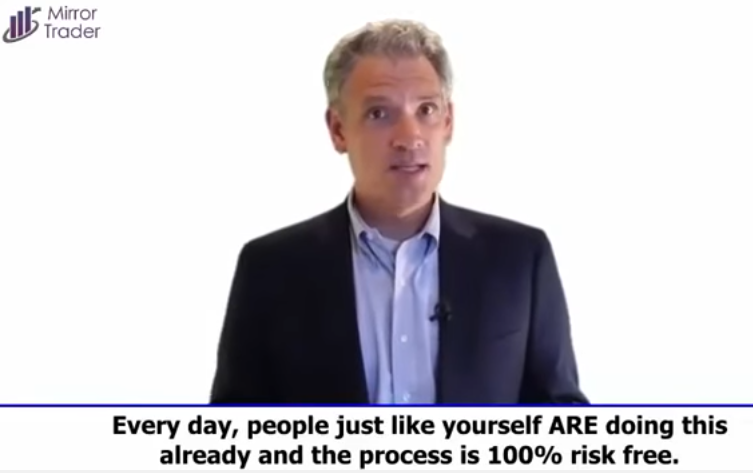 Does ‘Patrik Holub’ look familiar? He should, because the picture these scammers stole is Tony Robbins, the world’s best known self-help guru who has an estimated net worth of almost $500 million; we highly doubt that he signed up for such a lame scam under an alias. We would like to think that the scammers put it there as some sort of clever filter; making the scam as obvious as possible to make sure only the most gullible people slip through.

As these scams usually go, they don’t charge money for the robot but rather the scammers make money by getting an affiliate commission when you sign up with their partner broker. By doing this, marks get lured in by the lack of upfront cost and after they’ve made their deposit, the scammers have already made their commission and the performance of the robot is thus irrelevant. If you want to know how the robot works, don’t bother, because as we have explained, no robot will be able to match the fantastical claims they have put forward.

In our case, the broker we were redirected to when we signed up with Mirror Trader was OptionBit. As we have mentioned in our OptionBit review, not only is OptionBit completely unregulated, but has made false claims of being regulated by the ‘Seychelles Securities and Exchange Commission’; a commission which doesn’t exist! OptionBit’s previous owner was also the subject of a warning to the public from the Gibraltar Financial Services Commission stating it did not have the authority to use the addresses at which it were registered. Not a trustworthy broker.

Mirror Trader is yet another binary options robot scam in a sea of other similar scams. Despite how easy these scams are to spot, they show no sign of slowing down. In this case, Mirror Trader has also partnered with an untrustworthy and unregulated broker. Definitely give this one a miss.