Anyone who thinks that they can live a comfortable life by just using the Mobile Binary Code software would be in for an awful surprise. If anything the idea of a carefree luxurious life being sold by the scammers behind the Mobile Binary Code is a trap. So, expect to be disappointed if you buy into this pipe dream of sorts.

Let us start with the claim of the system being able to make anyone rich. If anything its lies and fabrication of the worst kind because it tries to lure people into thinking that they too can become rich without much hard work overnight.

If you want to make money, then you can be assured that the Mobile Binary Code system is certainly not the way to do it. The primary reason being that this person called Howard Kessler and his team are taking advantage of individuals who have no trading experience.

Is the Mobile Binary Code System a Blatant Scam? 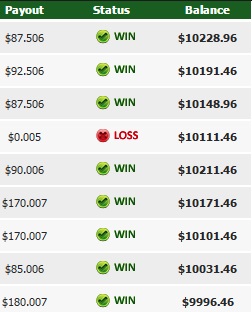 Everyone would like to make between $2000 and $15000 a day. That said it’s especially appealing to traders since the only investment required is a significantly small $200. But is that really the case?

Truth be told the vast majority of binary options robots being sold online these days use this trick to lure traders into using their applications. However, these applications fail to live up to the expectations of their clients.

That said our investigation into the Mobile Binary Code system reveals a number of upsetting facts about the man they call Kessler and the so called once in a life time opportunity he is offering. We think that he is trying to mislead people visiting his website and searching for a trading bot. Plus he is feeding people false information to sell his product.

The most blatantly incorrect claim is that Mobile Binary Code is a zero risk system and so is 100% accurate every time. How is that possible? Well according to him the app analyzes data from over a billion mobile users to highlight the overall trading sentiment. That data is then used to place highly accurate trades.

Ask any trader, and they will tell you that even though in theory it may sound good, that’s not how money markets work. Banking your trades on trader sentiments does not ensure success because if it were that simple everyone would be doing it. It goes without saying that nobody has the ability to predict how the market will move with 100% accuracy all the time.

Analyzing traders’ sentiments is just one factor that you need to consider as a trader yourself. But there are other critical factors as well like global market trends, historical data, etc. Even after you have all the data at your disposal, it does not mean that you’ll win every trade as the creators of Mobile Binary Code want you to believe.

We also found that all these testimonials are fabricated, we will talk about it in more detail later on. Whenever you have someone who is unknown claim that they have a so called magical formula that will help you beat global markets and make money you need to take those claims with a pinch of salt.

These people are lying, to say the least, but they are doing it to grab your money. So, it goes without saying that this nothing but a scam app aimed to steal your money.

Who is Mr. Kessler the Creator of Mobile Binary Code?

To start with our investigation revealed that the name is associated with several fake trading robots which are sucking traders dry. One of the places we were able to identify Mr. Kessler is on a website selling a similar trading robot called Profits Unlimited.

As you would imagine Profits Unlimited like Mobile Binary Code is nothing but a scam. If anything it’s already a well-known scam amongst traders. So, why is anyone going to believe this person named Howard Kessler again?

These are all paid actors, obviously

Now that we have proven that Mr. Kessler is associated with several scams like Profits Unlimited it’s plausible to assume that he is an actor or the fraudulent person himself. Though scammers don’t like showing their faces, so we’ll lean in favor of this person being an actor.

The fact that this person is associated with several known scams on the internet we would think it’s worth questioning everything he says and demanding proof. He claims that the business is amongst the biggest on the internet with over $50 million and counting. But again we have no evidence of if this is really the case and if in fact, his fictitious business called MBC Capital is even worth what’s being claimed.

What is MBC Capital and Mobile Binary Code?

After spending time and effort trying to find some proof of the existence of MCB Capital and its association with Mobile Binary Code Capital we found none. We couldn’t find any formal records to prove that this company even exists. It’s odd if you consider Kessler’s statement that his business is worth over $50 million and continues to grow exponentially.

We reckon that Mr. Kessler is perhaps running a secret organization which news outlets and genuine professional traders know nothing about. So, he’s willing to reveal his net worth but not where he’s located? 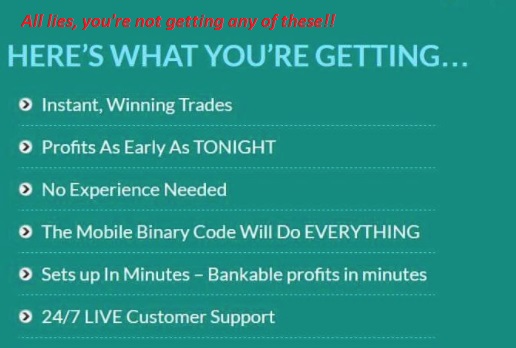 None of these “advantages” are true

This is strange considering that every legit business we’ve come across over the years is happy to give us their physical address, phone numbers and list their board of directors. Since they provide none of these details, it’s not worth investing $250 with them.

We have proven without a shadow of doubt that neither is the formal business registration nor the internet is able to give us any information about MBC Capital and Mobile Binary Code. Plus, the claim of being able to earn $12000 a day using the robot is a dream to the say the least which the company assumes will be bought by the gullible.

We would advise that you steer clear of Mobile Binary Code at all costs. This is a fictitious company trying to sell people a dream with lies and deceit. Our unbiased review is an effort to help people like you save money which can then be used with legit trading apps.