New Year Profit is a brand new software which promises millions in profits but is in fact a scam. Even though we have labelled it a scam, don’t take our word for it, read the complete review to find out which elements led us to this conclusion.

Additionally, we will also prove that whatever they are offering is also fake. Empty promises and outright lies are used to sell this scam to unsuspecting buyers and once you read our review you’ll feel the same way too.

Edward Pritchard is the self proclaimed chief executive officer of New Year Profits, though we’d like to point out that this is a fake name. Nobody knows his real identity and so no one knows him in the binary options trading circles.

Secondly even after Googling his name and searching various social media websites we were unable to find any mention of him. Which begs the question as to why nobody has ever heard of such a successful trader?

Plus there is no evidence of him being even successful. It is strange to think how nobody has heard of this so called successful investor, and if anything he should have been on the cover of a few financial magazines.

Making $170 an hour on average is an incredible feat for any trader especially considering a $250 investment. This claim alone with no proof to back it up in terms of concrete evidence points to it being a fraud and enough for us to blacklist it.

The sole intention of the New Year Profits software is to help these scammers get money out of your pocket and that too before the year ends. Perhaps these people are looking to generate a few hundred dollars for a New Year party. Regardless, you shouldn’t have to become a target for these scammers.

The software makes many extraordinary claims just as many other scams we have reviewed in the past. But we are unable to verify any of the claims made independently. Nobody we know has been able to make money using the app. As a matter of fact if anyone has made money using the app and is reading this review please come forward.

Conclusive Evidence Of New Year Profit System Being A Scam

As already mentioned above we have many reasons that lead us to believe that New Year Profit is a scam. It is also one of those scams which is intended to target either people who have never traded before or those who are new. Either way anyone who uses it will be highly disappointed and we’ll tell you why.

Now when you start watching the video one of the things you’ll instantly discover is that they have used a voice-over artist. So, the voice is not of the person that you are seeing in the video. Consider this a sort of dubbing.

Other than that the creator of the software or the presenter does not say anything worth knowing about the software. What is really done is string together a long list of technical jargon and embed selling tricks to convince people. Which means that you never actually learn anything about how the system works. 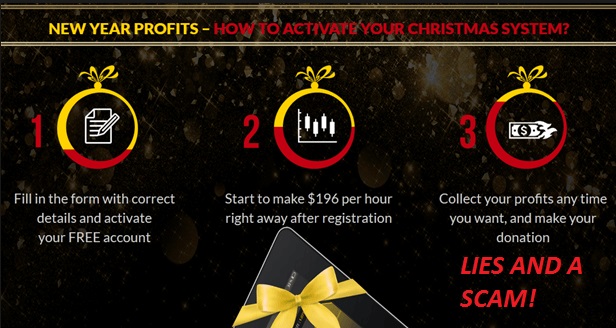 So is it a New Year system or a Christmas one?

Most if not all professional traders don’t have the time for so called ’feel good’ or ’rags to riches’ stories that these scams use. All traders want to know is how the app works. This knowledge would help them determine if it’s worth their time and money. However, you will never get any proper information that you can use about the software. Why is that? Well because they have nothing to say about it!

The New Year Profit system like others want to sell you a pipe dream. The video, content and promises are there to make you feel as though this software will make you rich. However, with no legitimate information about the software it’s impossible for us to recommend it to traders or anyone for that matter.

After checking several endorsement websites and forums for reviews about NewYearProft.com, we were unable to find anything about it. Though one interesting thing is that all the websites that endorse this product are fraudulent themselves. It is for this reason that you should be careful of the endorsements.

If you sign-up and gain access to the New Year Profit Members’ area, you’ll also discover a lot more evidence showing it to be a scam. You’ll see that a number of people are claiming to have made the amount of money claimed by the system. But when you cross check their identities it’s not hard to figure out that they are not real.

The fake reviews have been made possible by purchasing pictures of individuals from Fiverr.com, and then attacking a false name to them. It will come as no surprise apparently that the names are fake.

That goes double for the founder of New Year Profits i.e. Edward Pritchard who too is non-existent. So, nobody knows the real people behind this scam. So, it begs the question as to why would you want to use a system for which even the founder will not stand by with his real name and instead uses a fake identity.

Now that we have established that all the information provided by so called members in the members’ area are fake, lets move on to solidify that as proof. One reviewer and member Julia Rasckle, for instance is an actor and claims she made a large sum of money using the software and method.

But that’s not true because after extensive research we couldn’t find this person. Though we found out that the photo was purchased from fiverr.com, and then attached to the video with a fake name. Clearly it is a scam!

So, we searched for this person and didn’t find any proof that he existed. Which leads us to conclude that the system relies on an extensive network of reviewers who are fake to promote the scam product. Obviously the entire system is corrupt.

Finally we come to the use of fake endorsement badges. These are fake because they cannot be clicked on to be taken to their respective pages. So, the software does not have any real authority. If anything this is enough evidence to brand this a scam that should be avoided.

So, we come full circle by yet again saying that New Year Profit is a scam. All information you see on the website is deceptive, misleading and an outright a lie. It is one of the most blatant binary options scams we have seen in years.

Though watch out because there are others. If you are genuinely seeking a binary trading software that works and helps make you money then we have a list of those too.