The Nova App is yet another scam which has managed to catch the attention of some newbie traders in the community. The fraudulent app is run by a guy named Michael Newberry which is obviously not his real name because crooks don’t like people identifying them. The claim made by these criminals is that the app is capable of generating $5,250 every day, which is apparently a very tall claim.

He has also said on the official website that a mere $250 investment will be transformed into $500 in just 80 minutes but without any proof of how that will happen. Plus, there is no proof that anyone has ever made any money using the Nova app. Since we’ve already identified it as a scam it’s important to understand that any and all claims they make should be taken with a grain of salt.

What you should know about the Nova App

The rule of thumb with trading robot apps is that if they are making trading decisions on autopilot, it does not translate to big profits. In this case, the creators of the app are promising huge profits which in our and many other’s experiences is not possible.

The Nova App has already been identified as a scam. It attracts people by promising that they will make a lot of money in a short while without any risk. The claims they make are mere fantasies which unfortunately target newcomers to the industry.

Now before you go about thinking how rich the app can make people its important to think about how it works. The first and most important question is if the software uses an effective means of trading? Are the earnings touted by the company realistic in the context of how the trading industry works?

There’s no system out there with a 100% accuracy rate

We happen to carry out a pretty thorough investigation of the Nova app platform. We’ve been through every aspect of the app as we do with all other similar scams. Though we had our doubts from the beginning, those suspicions were later confirmed with proof that the fraud only works to steal your money.

The most significant evidence of it being a scam is exaggerated claims of being able to make huge profits which can potentially help people earn millions. Obviously as mentioned above this can’t be the case.

The problem with the Nova App software is that it uses many of the same misleading aspects of other similar scams in the industry. So, anyone who uses this software is committing a huge mistake simply because they assume that the app will make them rich.

What aspects of the Nova App make it a scam?

The important thing that all traders especially those who are new to the industry should know is that there is no such thing as a no-loss trade. No trading system can be 100% accurate mainly because there is no such platform in the world.

Any trader with some experience knows that there are inherent risks with trading. There will always be losses, but their job is to manage, minimize and if possible eliminate loss using industry knowledge.

The Nova System will not help you reduce losses but rather maximize it because, in reality, their win rate is barely 30%. But then again that’s the best you can expect from a white label app with a cheap Nova App logo pasted on to it for legitimacy.

Again with the hyperbolic statements, a staple in this kind of system

The other aspect of it being a scam is that none of these people appearing in the video are real traders. Real traders don’t sell others fantasies they deal in actual facts. Also, real traders will never stoop so low as to write up fictitious testimonials and reviews like the ones we find on Nova App’s website.

How can we be so sure that the testimonials are fake? We examined the testimonials and found out that the photos against which they are placed are of people from stock photos. So, the evidence points to these testimonials being fictitious just like the photos. Plus, independent parties will always mention drawbacks and issues as is the case with every other service with real reviews on their website.

The other problem we have is with the profit figures which are probably not realistic by any measure. No way just anybody can start earning over $5000 a day without lifting a finger. Some even claim to be making over $75,000 according to the testimonials which is outrageously ridiculous.

Many if not all scammers will resort to using aliases or fake names so that they are never identified. Take the phony name associated with Nova App. Michael Newberry is obvious an alias which is meant to hide the real person behind the scam.

We also did a bit of digging and found that Nova Holdings is not registered as a business anywhere. Apparently, they are using fake company names and people names to fool those who want to make money fast and are blinded by this notion.

When you add up the fake CEO with the phony company, the outcome of this company being a scam is evident. As soon as you deposit money, be assured that it will disappear. So, you need be very careful of these and other similar scams. A simple Google search helped us identify Nova Investments, Nova Holdings, and Nova Capital; you can do the same.

The Nova App system website is littered with reviews and success stories but then again so are all other scam websites. The Nova App scam website though has clearly paid actors to peddle the scam and sell the idea of $5000 a day in profits.

Interestingly the actors have played their parts in other scams one of them being Banker Profits. Apparently, this person couldn’t be using two bots at the same time! In reality, this is an actor who keeps taking on a new name and script to peddle the fake merchandise he’s been hired to sell.

Plus, there is very good evidence to substantiate that the scammers have further edited the stock photos for the project. So, the so-called Nova Holdings conference meeting is a photoshopped image. The picture was edited with their watermarked logo added. If anything these types of antics creates further distrust in them and the software as opposed to convincing us that they are real. 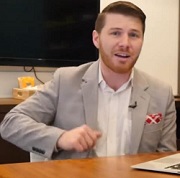 The creator of the system, like all the people in the testimonials, is a paid actor

Anyone who still believes the so-called no-loss trading myth is invited to join the app to experience losses first hand as a matter of fact they should even read the disclaimer statement by the scammers.

The disclaimer aka the fine print reads that there is no guarantee that the app will make you money. Also, the website clearly states that traders are responsible for losses and so all burden is taken off the shoulders of the scammer.

When you compare and contrast the disclaimer with their claims its clear that each statement made is contradictory. So, you just cannot believe anything they tell you. They don’t even tell you how the software will make you a truckload of money.

We are also lost for an explanation as to what a Massive Data Crunching Mainframe is needed for when they take no responsibility? Whenever you see vague terms used to describe the working of any software you can bet that it is a scam.

The point of our detailed Nova App review is to reveal the truth and expose these scammers. What you choose to do is something we cannot influence or control. Though we advise our readers against using the app because all evidence we gathered points to it being a scam.

We are not easily wooed by claims of being able to make thousands of dollars a day without solid proof, and that’s what missing from this app. You are advised to avoid any and all apps that make unfounded financial earnings claims. Claims like these are made by scams, so use at your own risk if you choose to do so.