Perpetual Formula was developed by David Parker, the former head of a Wall Street trading firm, specializing in High Frequency Trading. His firm made well over a billion dollars for his clients and he soon decided to strike out on his own; bringing his team with him. Of course, while Mr. Parker is a wealthy man, he is unlike other wealthy people who he claims likes to laugh at the misery at those with 9 to 5 jobs. Nope, he is the good kind of wealthy person, so good that he shares his software with select users for free! That’s just the kind of person he is.

And as for his binary option software? It works by analyzing the news and using machine learning technology is able to predict with 100% accuracy how the markets will move. They claim that the software has not been wrong once since 2002 and its results are guaranteed. You can find the entire story in their promotional video here.

So is Perpetual Formula the real deal or just a real scam? Check our answer below!

What is Perpetual Formula Robot?

As you can probably deduce just by taking a cursory look at its claims, Perpetual Formula is a laughably unrealistic scam. If there really was a formula that could predict with 100% accuracy every single market movement for over a decade, then its creators would be richer than Warren Buffett and Bill Gates put together. As anyone knows, there is no such thing as a 100% guarantee when it comes to trading, binary options or otherwise. Anyone who claims a 100% accuracy rate in trading is simply selling you a fantasy.

Let’s take a look at the video itself. ‘David Parker’ is likely just a local actor from Portland, Oregon, where many of these scam videos are shot. While we were unable to confirm his exact identity, we did recognize a prominent location in the video; the Liberty Centre in Portland which is a well-known local landmark. The funny part is if you watch the video, ‘David Parker’ claims to have bought the building so his team could be under one roof! Simply hilarious.

Of course, David Parker isn’t the only actor to appear in the video; they also have actors appear to give fake testimonials as well, which is a standard practice when it comes to these scam robots. Similar to many of these scam videos that were shot in Portland, the scammers used local actors instead of cheap hires from Fiverr. However, this time we were able to recognize on the testimonial actors in the video as having appeared in another scam robot: The Azure Method 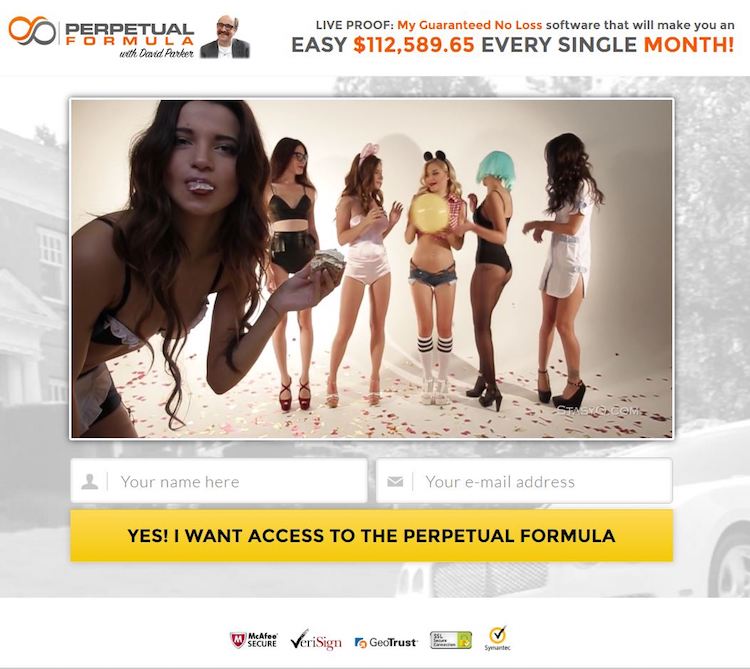 So how do all these scam robots work? First, the robot itself is likely a generic auto-trading software that the scammers bought once and reuse for every scam. And as for how the scammers make money? The do so by getting their unsuspecting victims to fund a trading account with their partner broker which leads to them receiving a nice affiliate commission from the broker. In this manner, by the time the victim discovers the robot does not perform as promised, it is already too late. Further, since the robot is provided free of charge, there is also minimal legal recourse for them to go after the scammers.

In our case, we found that the Perpetual Formula site was not able to redirect us to any binary options broker when we attempted to sign up; it appears that the scammers have already moved on to their next scam robot.

The Perpetual Formula is just another generic scam with bombastic and unrealistic claims. The only ‘perpetual formula’ that these scammers have is the formula by which they keep recycling and repeating these scams. Give this formula a definite miss.