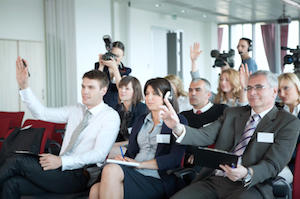 Most of us know that economic news plays an important part in the analysis of price movements in the markets. For example interest rate adjustments and announcements made by the central banks are sure to have an impact on the markets, as these decisions often shape the way investors react to the news releases. For this reason, events listed on the economic calendar are often monitored closely and eagerly anticipated. Due to the importance of these key decisions taken by the central banks, their pronouncements are often followed by a press conference. And because these press conferences give context to the reasons behind some of the decisions made by the central banks, they sometimes end up being far more important than the actual decision itself. As such, it is also important to take note as to when these press conferences are going to take place.

For Europe, the announcement of interest rate decisions made by the European Central Bank (ECB) is always followed by a press conference. The ECB’s residing president (currently Mario Draghi) will first read a prepared statement. Following the statement, there will be a Q & A session in which the ECB president will answer questions posed by members of the press from all over the world. This Q & A session itself can be a real market mover as nobody knows the questions that will be asked nor the answers given. Hence any unexpected answers or projections that aren’t in line with the recent decision taken will definitely cause a reaction in the markets.

As mentioned earlier when reviewing the economic calendar, it is equally important for a trader to take note when these central bank press conferences are going to take place. While news trading is a familiar topic among traders, trading around press conferences is a relatively new concept for most traders.

Part one of the U.S Federal Reserve press conference will entail the chairperson reading the statement that has been issued by Federal Open Market Committee (FOMC) earlier during the day. The statement also includes the perspectives and forecasts provided by the individual members of the FOMC. Based on these forecasts, investors will be able to see if the members of the committee are bullish or bearish about the state of the economy. This assessment can then be used by investors to formulate their investment strategies accordingly.

For part two of the press conference, this will consist of the Q & A session where members of the press can pose their questions to the members of the committee regarding the state of the economy and the short term and long term objectives of the committee. Usually, it is during this session that the volatility in the markets will spike in response to the answers given by the committee members. For traders seeking to profit from the increased volatility in the market, they should ensure that their trades are based on the short-term perspective. But on the whole while the press conference is still transpiring, the trades made should be based on a lengthier expiry period.

While these central banks and press conferences are certain to offer amply profitable trading opportunities, it doesn’t mean one should trade all of them as one cannot be certain that the associated price movement will be minor or substantial. Nevertheless, with binary options trading, the quantum of the price movement is of lesser importance since traders only needed the price to move in the predicted direction to close in the money.

In 2007, the ECB conducted a study to gauge the effectiveness of press conferences in explaining monetary policies. The findings of the study were published in the ECB working paper #767 in June 2007. The study revealed that press conferences do provide additional information in a systematic manner to the announcement of the ECB monetary decisions. The study also found that the press conferences often have a greater impact on the financial markets than the initial release of the announcement itself. However, the study also found that the reason for their greater impact is because of the forward-looking perspective that they provided especially in situations where the markets are uncertain of the direction which the central bank is heading towards with regards to its macroeconomic policies.

There is no doubt that press conferences over the last few years have become an important tool for central banks to communicate their monetary decision effectively. Given the rising importance of press conferences, it is crucial that binary options traders also learn to incorporate press conference trading as part of their overall trading strategies.