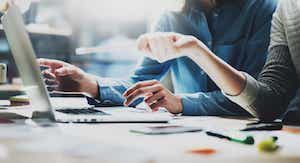 Channeling is a technical stock trading term that comes from market analysts that use charts to follow the trends of the markets they are interested in. This type of trending is popular because the channels are recognizable and based on logic.

Trading Binary Options is a little more sensitive because you are trying to predict what the market will do. You are wagering on the answer to a yes or no question: will the price go up or down in a certain time period. The timing and price cycle is extremely important. If you are not following the trends it is just a shot in the dark as to which way the market is going to move. With Binaries you can trade both sides of the asset as well.

Channeling trends can be laid over top of the Binary Options trends and can be very helpful in determining the up or down trends and when to buy into support (call options) and sell into resistance (put options). By charting the two together you will get a double zigzag pattern which will detail the trends of highs and lows over a period of time.

Channeling starts with a chart – a series of highs and lows. The trader is looking for a trend such as a series of low highs that break to previous lows. This could be the start of a trend. The trader then draws a line from the first high to the next lower high and projects it all the way through to the right-hand side of the trend chart. This, then, is the trend line.

Corrective waves are where you can form a channel. You will find the double and triple zigzag waves an optimum point for channeling. A zigzag follows a 5-3-5 pattern, meaning the A wave will be comprised of 5 sub-waves, the B wave will be made up of 3 sub-waves and the sequence will be finished by wave C with 5 sub-waves; the sequence together forms a zigzag pattern. The introduction of an X wave is what determines a double or triple zigzag. The 5-3-5 pattern continues but happens in a double where the X wave happens followed by another 5-3-5 pattern.

Strong trends can usually predict a channel. A Pitchfork tool can be used to find a channel. A pitchfork tool takes the shape of a pitchfork in that it has three “tines”. The three tines connect three points: the low, the higher and a higher low OR a high, a low and a lower high, depending on a bull or bear market. If you draw a line following the points of your pitchfork tool you will have a median line and two parallel lines, one on either side of the median. The three lines together make two channels. The midline is where the price should be attracted. The other two lines predict the support and resistance movements.

Using channels formed from Elliot Waves is a great way to determine when to trade or use binary options. The more you study these trends and use the tools, the more knowledgeable you will become and will be able to recognize these points and trends much easier.