Our review of the Referral Project exposes this elaborate scam. Everything about the trading software is a sham, which is why we strongly advise that people don’t use the software. The claim is that the Referral Project ensures that traders will be able to win all the time but that’s not possible when trading binary options or even any other style of trading.

The Referral Project also emphasizes that people can make money by both trading and referring other people to the scam. During our assessment of the Referral Project, it was clear that the creators make absurd claims of up to $4,500 a day. But in actuality, you’ll not make a single dime except for lose all your money to the scammers.

How Does the Referral Project Work?

According to the sales page, it helps to lessen the work hours put in by traders and also financially liberate them. They also claim to be able to make much more money in a short period of time as compared to other types of investments.

Binary options traders are promised thousands in profits each day. The software can be downloaded to the trader’s desktop computer. Even though we read reviews saying that the app was free but it still requires an investment to start making money. The starting investment is $250, which can vary from one broker to the next depending on which you choose.

Why is The Referral Project a Scam – We present the evidence

The creators claim that you can make a profit every second you trade which then means that you end up with around $2000 in profits within just a few minutes. Created by Evan Baker, it is in fact just another binary options trading scam; it goes without saying that there are several others like it.

Much of the promises if not all are unfounded and are there just to help the owner of the software get more people to invest their money which in turn means more money for them. Plus, they use blacklisted and unregulated brokers who award them a commission in exchange for each trader referred.

Apart from the trading scam, it is also running a referral program scam. The aim here is to get people who use the program to refer it to other people they know while only offering a one time commission.

Though you can refer an unlimited number of individuals per day unlike the Referral Project method which sets the limit at just 100 a day, the fact is that the people you know will lose money.

The Referral Project is certainly a massive fraud that everyone needs to be acutely aware of since they are asking for your money. Not to mention the fact that you’ll be risking a lot more when using it.

They are taking advantage of highly networked traders in the binary options industry. The so called ’free money’ they promise is too good to be true and with no proven returns, we have to deem it a scam.

The use of fake reviews

The Referral Project uses a number of tricks which are employed by other scammers, one of which is using fake reviews. Evan Baker is a paid actor who has been paid to make all these false promises.

All the claims and promises are not backed up by proof. He argues that it is a fully automated software and so traders don’t have to invest time in research. It also claims that all traders can make at least $1000 a day, but in reality, this is not the case in the binary options industry. It is a fantasy at best!

When reviewing the Referral Project, we found that it is not a friendly software, but rather it is unreliable. The sole purpose of the software is to make sure that your account is empty as soon as you invest.

But it does a good job of masking itself as an authentic binary options trading application so that people are attracted to it. The claims of being able to make thousands of dollars in profits and 100% returns are fantastical at best but are lies in reality. 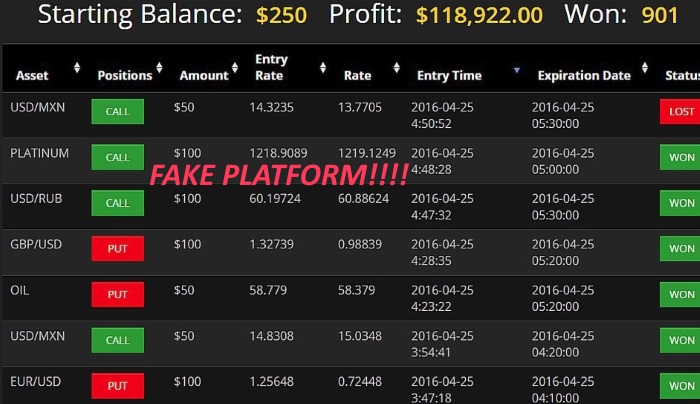 The platform is obviously fake, with no functionality behind it

The returns being promised are unheard of in the binary options trading industry. Nobody can guarantee 100% returns in such a volatile market. So anybody who believes them and invests real money in the Referral Project will lose. It is a sham with the objective of stealing money. The magic formula they want to sell you does not exist, and it’s impossible.

When you are a binary options trader, it’s impossible to make money without being involved in the process. The free money they promise along with the referral scheme only works to make the scammers money. The claims made as to how the software works run contradictory to how the binary options industry works.

The Referral Project’s primary purpose is to steal from people, and it’s a ploy everyone should be aware of. The referral aspect of the software which claims that the broker pays every day for each trader that’s referred to is also not possible in the binary options industry.

The fact is that the owner and who is also the presenter of the software is fake. He is basically just a paid actor who has been hired to convince people visiting the website to loosen their wallets by giving in to their greed. If you do give in, then you’ll surely lose money.

The main page of the website ’thereferralproject.co.’ has a video that says everything that people want to hear and nothing else. However, upon closer inspection, it’s not hard to determine that the claims of returns are just ridiculous. The video is trying to force people to signup to the platform by making false promises.

The promise of a smooth life and one without struggles are just part of the sales gig. Then the showing of fancy cars, large houses, and prime locations works to reinforce their idea of you being able to live the good life with free money. However, these tricks are not new and are used by several other scams.

Other trying to sell a fantasy the video does not provide people with any useful information about the software. The Referral Project is not based on logic which is why they need to appeal to people’s emotions. The use of fake credentials and their partnership with blacklisted, unregulated brokers tries to make things look real.

The use of a count down timer is a pressure sales tactic used to push people into making a hasty decision. However, we found that the timer only restarts each time it reaches zero. All the reviews you see are paid for.

Even the so called traders reviewing it are fake. We found that no credible third party has ever examined the software. If they need to bank of fake reviews, then it stands to reason that the real reviews are bad!

We found the Referral Project app to be a scam and one that you and everyone reading this should avoid. The software’s primary goal is to make the scammers behind it rich while everyone else will never benefit. While the promises are alluring, they only exist for the sole purposes of pushing a sale which is why they offer no proof and don’t talk about the system in detail.

All traders using the system will end up losing money. This review should serve as a warning to everyone who is considering the Referral Project as their go-to binary options trading tool because there is no easy money!