We discovered the Royce code software a while back and since then have determined that it is yet another binary options auto trading scam. How did we arrive at this conclusion so soon? Most people will say that we need to thoroughly investigate the software before calling it a fraud.

However, the website is fairly new, hardly a few months old and yet they provide evidence showing how successful the software has been. That said we have provided you with a complete and unbiased review of the software so you can see precisely how they fleece people.

The scammers want to make everyone who visits their website feel special because that’s one of the keys to cheating them. So, they start off by stating that you’re one of the few chosen individuals to use this so-called exclusive software. The software is available for just seven days, and they only need 15 beta testers who will become a part of this program.

Richard Royce who is the so-called founder and CEO of the fake Royce Wealth Group is shown driving a Maybach. You’re also given a tour of his huge mansion. The showing of wealth is something that’s common across almost every scam we’ve reviewed in the past.

According to Richard who is the CEO of the company, the business manages over $2 billion in assets for clients and himself. If anything that’s a tremendous amount of money by any standards. The major USP that they keep quoting is that it is the first ever automated and even insured profit generator. 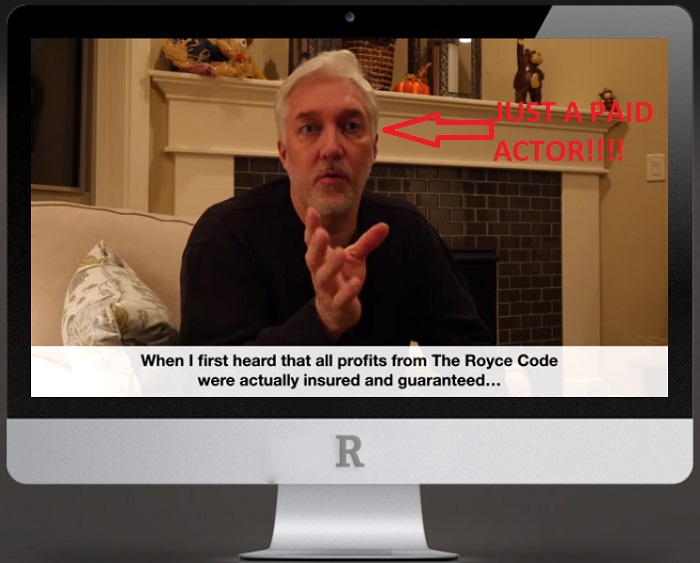 Obviously, the supposed creator of the system is nothing but a paid actor

So, people are guaranteed to make profits using a brand new and genuinely innovative strategy. To further solidify its claim they rope in a well known, third-party insurance company as a way to guarantee that people will make money. However, the disclaimer they later splash across the website is that the profits are insured for the final 24 hours.

Richard claims and even asserts at times that traders can withdraw all the profits they make and the proceeds can be quickly transferred to their bank accounts. Also, the worst case time quoted in around 24 hours. Plus, he states that regular traders, i.e., the average Joe will get the same level security as high rollers with millions, not to mention the same level of access.

So, you’re insured too! The next step is to try and substantiate the facts and figures claimed in the video. The claim is that each trader can expect to make at least $2000 from their trading account. The system can run on auto-pilot mode which means that traders don’t need to put any effort into the process.

According to Richard, the club is only for rich people, but it is the first time that he’s decided to lower the minimum $25,000 minimum deposit. Supposedly his innovative team has been working on a secret project for over 18 months which has now come to fruition.

According to him, the team of developers has gone over every trade they have made and then developed a single algorithm that covers all of those trades. Which does not say much about how it works and neither does it speak to its effectiveness. The rather interesting thing here is just about every scam trading software promising millions on autopilot claims to use the same algorithm.

Why is all this a scam?

After having researched and thoroughly going through reviews of the Royce Code software we can easily conclude that its nothing but a scam. The so-called affluent Richard in the video is not really Richard Royce, and we doubt the existence of such a person too. However, this guy is just a cheap actor whose real name is Kevin S. Martin.

Mr. Martin has appeared in many other cheap, scam videos and also has his own website too. You are welcome to visit the website of this so-called Maybach owner, and the person who manages billions each day.

The video also shows us insanely large bank account statements along with a load of hyped up claims about how easy it can be to make millions in mere days. Though we agree that there are many ways of becoming a millionaire but investing with a fake software is probably not one of those. As a matter of fact, it will mean that you lose money.

It’s also important to expose all the fake testimonials. There was one Mr. Watson from a scam app called Obcasio not very long ago. This group of scammers hires professional actors who would be filmed giving fake reviews for the software. Though the testimonials didn’t contain an iota of truth.

If we had a dollar for every time we’ve seen this kind of message in these shady systems, we’d be billionaires

These people were all just reading from a script to obviously make a few bucks. So, one day you see an extremely rich guy called Michael later becoming a beta tester himself…which begs the question as to how come such a rich person needs a job in the first place?

Then there is another paid actor whose name is supposed to be Steven whom this Richard character calls on his cell phone. Richard asks Steven on his views regarding the software that he is supposed to have just started using around 3 hours ago, perhaps this morning. Now this guy Steven reports that since the last three hours he has made $1500.

People they are trying to lure are promised that they will be insured for around $5 million in the event that the broker files for bankruptcy. If anything here too they are selling a pack of lies. For starters you will never make anything even near $5 million in profits, and secondly, why will any insurance company insure you when its such a volatile market?

Plus, if you’re not paying insurance premiums how can you be insured? Also, you’ll only pay premium is you’ve approached an insurance company for coverage and then buy their policy. It’s pointless to even consider that this claim has any validity.

All the while you’re on the website, you also need to deal with all kinds of nasty popups. It keeps telling you that registered members are eligible for a $10,000 bonus. Obviously this claim too is a lie.

Our advice to anyone reading this is not to register for their app. Our review has proven that they are not a real company, the app has nothing to offer and its a scam. All these people are doing is selling lies. We have seen many such scam websites and apps over the years, and they disappear within a few months. Then these scammers come up with a new name for the same scam.

Scams like these give binary options trading and traders a bad name. Scammers have ruined many lives. The Royce Code review is our effort to equip you with enough information to counter the lies the scammers want you to believe. We are frequently approached by people who have been scammed online and hear about how it has ruined their life.

Our effort is to ensure that you don’t fall victim to scams. If you want to become a trader, it pays to educate yourself but never rely on scams like the Royal Code app. Don’t let greed take control. Your dream of becoming rich is not bad but can be detrimental to your goals if you let it cloud your better judgment.