The trading industry, in general, is one of the few industries where you see new software introduced every day. It’s nearly impossible to review every bit of software that’s released into the wild, though we try our best. Today, we’re going to review Rubix Project, a software which claims to do everything traders ever dreamed of being able to do. However, our findings were to the contrary of their claims.

Rubix Project has embarked on a rather elaborate advertising campaign. Though it didn’t take us long to figure out their real motives behind it. Their promotional video is enough for any experienced binary options trader to understand that what they are selling is a scam.

Any experienced trader can tell you that promises like these are empty. But if you are not a trader then allow us to demystify their promises. The objective of the video, website and promotional material, in general, is to impress which it does to some extent but only someone who does not know what they are talking about.

However, your decision to read this review is a step in the right direction. It will help you understand the tricks and lies being employed by these people. We will help you save that $250 they are demanding in exchange for making fictitious thousands a day.

The founder and CEO Brian Morgan introduces the audience to the so-called awesome features of Rubix Project which are supposed to make you millions. However, what Mr. Morgan forgets to mention even briefly is that it’s not common to find multi-millionaires in the binary options industry.

That said he does make an effort to show that almost anyone in the industry who uses his auto trading software is living the dream life. Though all the people he introduces are anonymous. He then goes on to show us his Lamborghini, big home, etc. all of which is fake but meant to impress newbie traders.

Also, the CEO Morgan knows how to get some sympathy from the audience by letting everyone in on his troubled life. He claims to be an ex-professor of Mathematics but what he made didn’t suffice. It begs the question as to why other professors and people in academia have not left their positions for more lucrative ones? After all, he can’t be the only one making minimum wage as a professor.

Morgan claims to have been divorced, and attempted suicide but then came up with this software called Rubix since then his life has changed. According to him, the Rubix Project was developed by a team consisting of Wall Street Analysts, and people from Stanford University. But how did he do all of this when it has been established that he was broke?

The claim is that the Rubix Project helps him make over $86 million in just one year. And $40 million in profits through 2016. Also, it has the astounding capability of churning out a whopping $10,000 a day because apparently it only executes winning trades.

Why is such a great software, in fact, a scam?

Any experienced trader or even someone from the financial industry will sense that there is something wrong with what Rubix Project is promising. To start with the profits being promised which as in the words of the CEO generated on autopilot are hyped, to say the least. Also, it’s hyped to a bizarre level that it’s trying to test people’s intelligence.

Can you really rake in thousands of dollars a day by just investing $250? Are there any real world examples of this ever taken place? Also, stating that the software has not made a wrong or losing trade in 16 months is unrealistic. 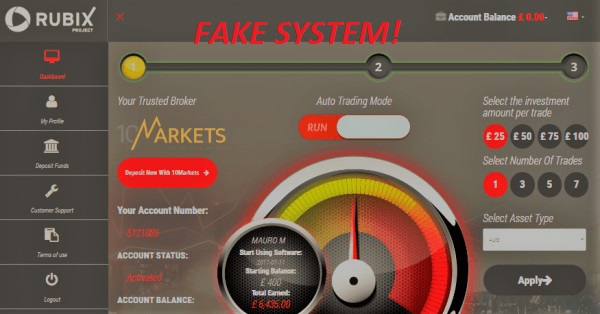 The system is a fake, obviously

So, they are alluding to the Rubix Project always make money i.e. a sure shot for lack of a better word. But that’s the biggest lie. Because trading is all about winning and losing. There isn’t a magic formula, strategy or algorithm.

The website has two very different videos. So, when a visitor tries to leave the website or page or perhaps refreshes it, they start the second video which shows a fake so called live trading session. He (Morgan) demonstrates how manual trading can be undertaken in addition to auto trading. The manual mode is shown working live, and because it is in manual mode, the profits are very thin.

The second part of the deceptive video shows the auto-pilot mode, and that’s where the scam tries to pull you in. He is demonstrating the software opening trades in 60 seconds and then winning them all i.e. in the money! So in no time, you see his trading account swell to over $10,000. He then claims this will happen forever. But again that’s a lie.

We didn’t find it hard to crack the malicious scam setup by the people behind Rubix Project, and like all other claims, this is a big lie. Any trader will tell you that trading accounts don’t offer same day withdrawals. It takes around 48 business hours to process. Numerous formalities and various procedures need to be completed which include security compliance before the money can be transferred.

Mr. Morgan does not seem to care much about the facts and overlooks standard practices by brokers. Do, you really think that as soon as you accumulate $10,000, it will be transferred to your bank?

Then you can book your dream car the very next day! But guess what? He just showed us the money he withdrew. But anyone can doctor these videos though it does to show the lengths to which these scammers go to fool people.

Rubix Project is like Many Similar Software In The Past

Not the first time we see something like this

When we first saw the Rubix Project interface, it looked very familiar. It’s like we’ve perhaps reviewed it before. So, we did a little digging and found it was simply a re-launch of other scams like Royce Code and Sowelstace Financial.

Like those software, Rubix project does not allow people to choose their own broker. You are locked into a default selection by the company. You can’t even set your daily loss limit. If they are pushing you to hire a broker they recommend, then we suspect collusion. But that’s pretty evident because the entire system is setup as a scam with the broker being a part of it.

We managed to find one other irregularity worth nothing with this scam. It’s like all the scam artists have teamed up to defraud the public. The analysts you see in the videos are in fact paid actors. Let’s start with the bald analyst. This guy was in a previous scam called Sowelstace Financial as the founder and CEO!

David and Brian (the other analysts) were also seen in a few other scams. So, it boggles the mind as to why would so called self-made millionaires be taking up roles as analysts. We can’t think of any reason other than their own software going rogue for some reason and costing them their entire bankroll.

Rubix Project is nothing but a scam regardless of the Lamborghini, mansions, and analysts. We hope that the facts provided will help you steer clear of this and other similar scams in the future.

Never subscribe by sharing any personal information. Like all scams take their promises with a pinch of salt and watch their videos for the entertainment value they present. But don’t consider it as a worthy investment.