Tesler App is a binary options automated trading software that claims to be able to make its users an average of $5,700 a day with a 99% success ratio. Is this a realistic claim? Read our full review below!

Mr Steven Abraham: Who is This Guy?

He assures users that he is the CEO of Tesler Investments. We did some research online and, perhaps unsurprisingly, Tesler Investment is not a real company as it is not registered anywhere. This makes us question all his other statements. If you are desperate enough to lie about a non-existing company (the fact that is very easy to check on the internet), what else do you have to hide? Even the laziest internet user will quickly figure out the truth about this one.

And just to be clear: Tesler Investment doesn’t have any company registration or documents and doesn’t have anything to with the brilliant car manufacturer whose name it attempts to imitate. For us, this is definitely a reason enough to write a negative review about this app.

This also right away makes us question the identity of the so-called CEO himself. If the company he claims to run does not exist, who is he? Well, as soon as we digged a little deeper, we immediately found out that he is in fact an actor who simply plays his part. Every part of the promo video – starting from the car this guy drives to the house where he lives is carefully staged for the occasion. This is sad and quite stupid at the same time. How difficult it was to track down him and find out about all the lies? 10-minute online search only. That’s how bad of a job they have done to hide the fact that this is a scam.

While watching some scam promo videos, it is often very difficult to hold back from bursting with laughter. But the Tesler app video is something from an entirely different level. For the whole duration of the clip, the self-proclaimed CEO we had discussed earlier keeps repeating that the Tesler App is a life saver for everyone who has any money problems at all. It especially seems cheap and unethical since the promo has been resealed just before the Christmas holidays, when a lot of people are certainly experiencing some kind of financial difficulties.

There is simply not enough time to describe how low this pathetic scam goes to attract at least some attention. And one would think they will not get any with all these cheap tricks, but as we know, there are always some poor victims that fall for these lies.

So how exactly is the Tesler App supposed to work?

Well, according to the video, a fraction of a second before placing a trade, the Tesler App does a high speed analysis of 60 minutes of market data such as the : 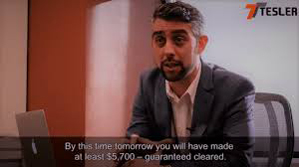 In addition, it also analyzes the text of the current ‘Breaking News’ segments of all the major news websites, looking for keywords that might affect the market such as ‘war’, ‘earthquake’ and ‘currency crash’. These are just a few examples; Stephen Abrahams claims that the software actually analyzes 3 million variables in that split second.

The ‘Tesler Principle’ ensures that the software only makes 1 losing trade out of every 98, which equates to a success ratio of just under 99%. And because the Tesler App ensures that each trade is only $85, any losses will be minimized plus given the success ratio, you will still come out well ahead anyway. And if the Tesler App makes a losing trade, it automatically stops trading and requires you to click ‘Trade’ again to resume auto-trading. That way, you are always in full control and will never see spiraling losses from auto-trading.

Stephen Abrahams also makes the following promise: if at the end of the trading day your binary options trading balance is below $5,700, Tesler Investments will make up the difference to you. However he assures us that in 18 months, this has never happened to any of his members.

Stephen Abrahams claims that the Tesler App is 100% free. After 41 days of use however, Tesler Investments will take a small 0.5% commission on top of a trader’s profits ($50 for every $10,000 profits). The commission will only be deducted one month after a trader withdraws his or her profits, which can be withdrawn as soon as 1 minute after making said profits. The reason the cost of the Tesler App is no negligible is because of Stephen Abrahams’ desire to give back to the people.

Nicknamed ‘Mr. Midas’ on Wall Street, Stephen Abrahams has developed a reputation for making money not just for himself but for other people as well. This is part of his initiative of making 10 people into millionaires within 6 months. Stephen ensured that only ‘average Joes and Janes’ were part of the initiative and that they would only have to sacrifice a few minutes a day. It was successful and now he wants to share his success with even more people.

Is the Tesler App Legit? 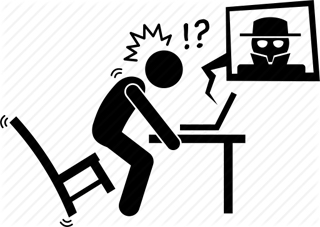 After reading the lengthy backstory above, do you think that the Tesler App can deliver as promised? If you did you must be surely delusional. Tesler App is basically saying that you can be a millionaire within 6 months from just a few minutes a day, at zero risk to yourself. Harry Potter is more realistic.

Here’s the truth, Stephen Abrahams is not worth 384 million dollars, and he did not found ‘Tesler Investments’, whose name is nothing but a rip off of the Tesla brand. Stephen Abrahams is no Elon Musk; in fact, he’s not even Stephen Abrahams. He is just an actor, and after some research, we have discovered that his real name is actually John San Nicolas, an actor from Portland, Oregon.

His resume seems to consist of direct-to-DVD movies, numerous stage productions, and a recurring guest role on the show Portlandia. Not mentioned in his resume is his numerous jobs for binary options robot videos such as this one; he was also the ‘lead role’ on the Swarm Intelligence robot. This is probably what local Portland actors do between real acting gigs.

The promotional video also contains several testimonials from allegedly satisfied Tesler App clients, again these are all actors. A couple of them are local actors from Portland, Oregon (where many of these binary options robot videos are shot, at least the ones with better production quality), while the others are just your standard Fiverr testimonial givers.

As for the still images of people shown, those are just stock photos and stolen unattributed images from other websites, which is a common tactic that these binary options robots use. The same goes for the ‘Our Members’ pictures on their website.

A quick Google search will of course reveal that there is no such company as Tesler Investments, which should be enough for you to know that everything the Tesler App video tells you is an absolute lie.

Even without the entirely ridiculous backstory, one only need to look at the claims promised by the app themselves. If all it took were a few minutes a day and zero trading experience to become a millionaire within 6 months, well, everybody would be millionaires by now. And all that nonsense in the video about ‘lead patterns’ and analyzing 60 minutes of data? Meaningless dribble designed to appeal to people who have no idea how real trading actually works.

Stephen Abrahams even contradicts himself within the video. In the video, he says the app will only place up to $85 per trade, yet the screenshots of the transactions using the app (all Photoshopped by the way) all show trade amounts in excess of $200.

All claims made by the Tesler App in their promotional video are 100% false. You will not become a millionaire in 6 months. Do not bother with this robot and learn how to properly trade binary options instead.