The Aussie Method, in its 20 minute introductory video, is presented by a faceless narrator but who we are to presume is one Jake Pertu, the chap whose face is so prominently displayed all over the official Aussie Method website.

The promotional video opens with various elated testimonials from the Aussie Method’s alleged clients; each one claiming that thanks to the Aussie Method, they are now very much well off and they just can’t seem to believe it.

After the testimonials, the faceless narrator tells us about the promise of the Aussie Method. If you don’t make hundreds of thousands of dollars within 30 days of using the Aussie Method, he will personally give you $10,000 cash.

Yes, that’s right; Jake Pertu promises that he will give you $10,000 in cash straight out of his own pocket if the Aussie Method doesn’t deliver. He goes on to claim that he made a similar offer to the aforementioned clients in the video a few months ago, but he never had to pay any of them $10,000 because the Aussie Method made each one of them a far greater amount in the hundreds of thousands.

This is obviously just a paid actor, not the creator of the system

He then confidently says that he has a 100% success rate with every single person that he’s ever worked with. He then tells us that because he’s so rich, he doesn’t even need money anymore, which is why he’s going to give the Aussie Method to you for free.

He then says that he doesn’t even need to work hard for his money; he works for minutes a day, doesn’t have much knowledge of the financial markets and that he even felt guilty for having so much money! And that guilt is what drove him to give the Aussie Method away for free.

He then shows us how quickly a $250 deposit can turn into over $20,000 in just a few days using his method; showing us his bank account balances. Then he lays down the rules on how you will be able to access the Aussie Method: right now, he can only accept 20 people because he wants to give them his full and undivided attention.

And the first 20 people who sign up and receive access to his system only need to do one thing in return, which is to make a video testimonial after the first 30 days telling people how much money they made using the system and allow Jake to post it on his website.

The Truth Behind The Aussie Method

Let’s dissect what Jake Pertu is basically offering you. He’s basically saying that you can get free money at zero risk, all for free and with barely any effort on your part. And not just small amounts of free money either, but hundreds of thousands of dollars a month or a multimillionaire within a year!

These promises are not only fraudulent, but outlandish too

This is about as realistic as finding a magic lamp with a genie inside that will grant you three impossible wishes. So the short answer is no; the Aussie Method is doing nothing but selling you lies. There is no system on earth that will give you the ‘results’ that Aussie Method promises.

Here’s the truth behind all those excited testimonials by people in their living room. They are not satisfied customers of the Aussie Method who have made hundreds of thousands of dollars within a month and are now doing their requisite video testimonial on behalf of Jake. 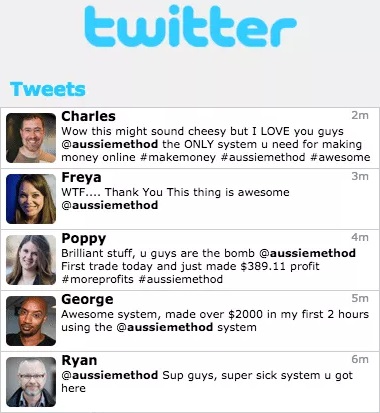 These testimonials couldn’t be faker if they tried to

Instead they are cheap freelancers from Fiverr (we recognized some of them from other binary robot videos) and each testimonial probably earned them a measly $5. To make a hundred thousand dollars, they would probably have to do 20,000 testimonials.

And what about Jake Pertu himself? He’s not a hired freelancer, he’s not an actor, in fact he is nothing more than a stock photo. This is the reason why his face doesn’t appear in the video, that way the creators of the Aussie Method don’t have to pay for an actor, just a voiceover, saving costs.

To conclude this section, just know that all the promises of the Aussie Method made by Jake Pertu in the video is completely false and will not materialize. All the ‘satisfied customers’ are actually cheap freelancers from Fiverr and Jake Pertu himself is not even a real person but just a lame stock photo.

The claims made by the Aussie Method are so outlandish that we have trouble believing that anyone but the most gullible people could even think it was possible. Nevertheless we feel it is necessary to expose the truth behind the Aussie Method. If you want to make money by trading binary options, you have to put in real work.

Under most common affiliate agreements, the creators of the binary options robot will now get a certain percentage commission when a new customer funds a trading account with the broker through the robot’s link. So the incentive of the binary options robot is purely to get people to fund a trading account with their partner broker.

Because the incentive of the robot is purely for people to fund an account with their broker, they always offer the robot for free, knowing that everybody loves free stuff. However, this also creates a bit of contradiction because they also falsely advertise the money making capabilities of said robot.

Why would anything so awesome be given away for free? So they have to come up with justifications such as doing it out of the good of their heart or free beta testing.

As for the actual binary options robot itself, of course it does exist, but it is usually just generic whitelabel automated trading software. It is a real robot, but there is absolutely zero guarantee of success and many people have found that it makes more losses than wins.

This generic robot is always jazzed up by promotional videos with outlandish claims and fake testimonials. Absolutely unethical and of course the binary options brokers that partner with these unscrupulous robots are typically unregulated and often display similar unethical behavior as well.

In the case of the Aussie Method, while their website is still operating, the redirect link to their broker is broken. This means that the creators behind the robot have already moved on to their next robot, which is a common modus operandi in the industry.

In the case of the Aussie Method however, you should not that the creators have repeatedly repackaged this robot many times over with names such as ‘The Irish Method’, ‘The Canuck Method’, and ‘The Malay Method’. They even use the same stock photo for Jake Pertu each time and the same testimonials!

The Aussie Method is just a lame binary options robots that preys upon people’s laziness to acquire wealth. However, the claims they make are so outlandish that it doesn’t even pass the first smell test.

The truth is that the Aussie Method is just a recycled scheme to generate affiliate commissions for their creators. Give this one a definite miss but don’t worry, you really won’t be missing out on anything of value at all.