Every one of us wants the opportunity to make heaps of easy money which is pretty obvious. It is for this reason that every one of us has been attracted to various enticing offers and so called short cuts to riches at some point in our lives. One such shortcut to making a truckload of money is called The Cash Loophole Software.

If you have been considering The Cash Loophole Software, then that is what has brought you here. In this review, we will go into detail about the software and let you decide if it’s worth trusting.

The software is classified as a binary options trading robot which claims to have a 100% win accuracy. The CEO named Richard Sellars also appears in the promotional video claiming that the software benefits from a uniquely designed algorithm which manipulates several market loopholes. Being able to leverage these loopholes means that traders always win.

According to Stellar his software takes advantage of numerous bad practices of price manipulation by brokers which is how it is able to deliver such a high success rate i.e. 92%. Honestly, that kind of success rate is unheard of in the real world.

Most if not all binary options traders will reckon that it is a scam. Almost anyone who has some trading experience will be skeptical of these claims. If you are skeptical, then you’re on the right track because it is, in fact, a scam! Below is how we concluded that The Cash LoopHole is a scam.

Why is the Cash LoopHole System a big Scam?

The self-proclaimed CEO of the system i.e. Mr. Sellars and his partner Kevin have designed the system to defraud and deceive unsuspecting traders and regular people. Perhaps the one thing that attracted you to the system was words like ”Exclusive,” and ”invite” etc.

The system sends out literally hundreds of emails to people inviting them to visit TheCashloophole.co and try out the system. The email’s use of fancy words will make you feel special, but there is an ulterior motive to it.

Think about if you’ve ever given them your email address? If not then to start off this is spam. Once you visit the website, you’re greeted with a sales video. In the video, the person greeting you is Sellars who is so shy that he won’t even show his face in the video. Though we are all for privacy but when you’re selling something by vouching for its effectiveness, we’d like to see your face.

The promotional video is of very poor quality and does not explain as to what makes the software tick. It just goes over and over again repeating the same claims of it help you make millions and using some special algorithm. In between they throw in various photoshopped images of money in Sellars’ account which just requires basic photo editing skills. 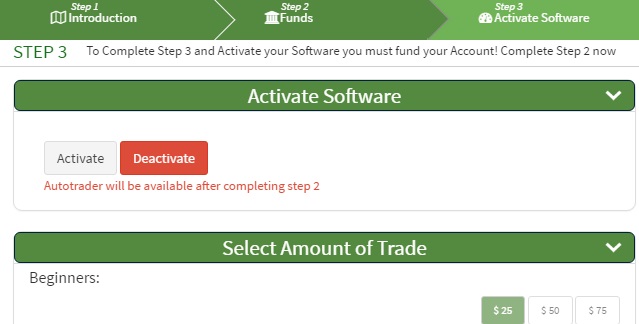 The platform looks rather primitive

To make things look legit the scammers blank out the bank account number, and name because they want us to believe that it is a real statement. If it were a legitimate company it would be registered, people would know it and the CEO who would have a public profile, but that’s not the case here. We don’t think that this half intelligent effort would lend any credibility to this software leave alone convince people to invest in it.

The video is meant to mainly appeal to the greedy nature of some people or all people perhaps. Deep down within we all want to make easy money, and the scammers know it. The voice in the background speaks of the same thing that people are doing on screen. They also seem to despise other scammers which is funny.

The creators of The Cash Loophole want you to think that they are here to help you make money and they do that by promising you $1000 when you sign-up as a bonus. But this is yet another reason why you shouldn’t fall for this scam.

Nobody is going to give money to people who sign-up randomly it’s never going to happen. If anything these people have taken an older similar scam and rehashed it with a new name, logo, and content.

The creators claim that the system has been proven to work with 1478 overall trading sessions over the previous 48 months, during which it lost just one day. Yet another bunch of lies which almost any trader who has used auto trading apps can expose.

Trading binary options is not consistent; it is for this reason that it’s considered a high-risk business. So, it’s only for those who have an appetite for high-risk ventures because there are always losses.

To excite people the con artists have a list of people from your country making enormous profits. It is yet another ploy to deceive you. They want you to think it is genuine because people near you are becoming rich.

However, it’s a simple trick of geotargeting manipulation that helps them figure out where you are located based on your IP address and present you with a customized trap. So, it is them who ends up making huge profits while you lose all that hard earned money.

Watch out for these false promises 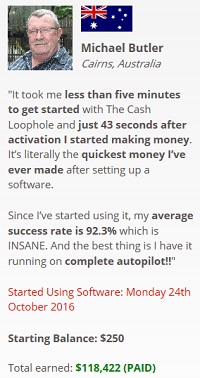 Of course, this testimonial is false

The claim of a 92% success rate is ridiculous, to say the least. There is no legitimate trading application which can deliver such high rates. Our experience and those of many other traders tell us this is not possible.

They also promise to deliver $50,000 in the way of a matching bonus when you deposit money. But think again because nothing in life is free, and the $50K is not going to be free so think what they really want in exchange for it.

The other claim is that you can rake in large sums of money i.e. something to the tune of $1987 or near about in just three hours. But in reality, it is not possible by any means to turn a $250 trading deposit into thousands of dollars in hours, not even in weeks and that too with sold trading strategies. Any trader will tell you that making money in the trading industry is not easy, and especially not as easy as it is made out to look.

It takes time to make money even if you are lucky. You will not make significant profits without having to invest a large amount of money and then hope to win the majority of traders. If anything the long list of negative user reviews should give you some perspective on this. There are numerous cases where people have put in large sums of money and are now trying to get their money back because the scammers have disappeared with it.

The other line and the nail in the coffin of this scam is that you will be refunded 2x the amount that you invest initially if you don’t make a profit. So, it begs the question how exactly will you go about claiming the money?

Unless you know who these people are, where they live and if it is a registered business. It is by design meant to lure people into the false sense of security thinking that there is no risk involved, but that is where they will get you!

The Cash LoopHole is a fraud, to say the least. It uses sand testimonials and various video messages to back up their lies. All of that goes well with the music in the background. But these are all part and parcel of this scam.

We have reviewed many scams in the past, and they all have the same elements as this one. Our hope is that this review saved you from having to invest money in a scam which would leave you without anything.