The Trader app is a brand new scam that we ran into just recently. Created by Brian Wren along with Howard Davis it looks good on paper, but in reality, it is a binary trading scam that will rip you off.

The app and its creators Brian and Howard use an assortment of deceptive tricks to sell the product to perhaps newbie traders. Every aspect of the claims made on the official website are false and shouldn’t be considered anything other than snake oil sales.

To start with the $8000 a week income promised is an outright lie. The smooth talking creator uses fancy words to lure people into his trap. The only person who makes money with this app is the creator!

We are reviewing the Trader App mainly to outline and highlight all the elements of this scam so that you can be careful. Once you find out the truth, we have no doubt about the fact that you will not signup with this scam. Though anyone that does or has already will lose their money.

It the Trader App a Fraud?

To start with the creator Brian Wren isn’t as honest and straightforward as he’d have you believe. This person is a selfish scammer who paid the webmaster of thetraderapp.co to work with him in promoting the scam. We think this is a crime by both the webmaster and Brian Wren.

This accuracy rate is completely unrealistic

The story as it is told on the official website is that Brian has used more than 30 trading robots all of which were a failure. He is trying to portray himself as some type of expert when anyone wants to earn money fast in the binary options industry. By portraying himself as an expert, he hopes to level with people who are going through a similar experience.

He then assures newbie traders that they don’t have to go through the same hassle and end up being scammed thanks to his so called cutting edge app that is guaranteed to work and churn thousands of dollars for traders.

The problem as we see it is that many newbie traders have no idea how the binary options trading industry works. It is important to highlight that there is no special formula or algorithm which can help you make millions on autopilot.

Even this so called revolutionary formula will not help you make $8000 a week just working for 5 minutes daily. It is just a scam, and because of that, the creators don’t have any proof to back up their claims. Which means it is just a tall claim and not based on fact.

Did Brian really develop the software?

We know that Brian didn’t develop the software because it is a white label. For those who don’t know a white label software is one that you can buy for cheap and put your logo on it. People use this type of software to run many similar scams in the binary options industry.

Just one look at the Trader App and it’s pretty clear that it resembles many other scams that we have evaluated and reviewed in the past. The only thing that’s changed is the colors and fonts, with everything else being the same.

While the system looks nice, we doubt it actually works

Now to the question as to who owns the software even if it is a white label? Well, we can tell you with out a shadow of a doubt that it certainly isn’t Brian Wren. If anything he was hired by the person who owns Trading App to make the video and endorse the product on his behalf. Though there is also the possibility that Brian purchased the software and repurposed it to scam people.

Every software programmer or even a high profile binary options trader will have some information about them available online, but we found none. No one has ever heard of this self-proclaimed top notch trader.

All you have to do is to Google Brian Wren or search on any social media platform. Like us, you will find nothing which indicates which indicates that there is something wrong because he is hiding. This is another reason why we think that the Trader App is a scam.

Despite constant research, we found nothing about The Trading App. We think that there is a deliberate opaqueness about this product and its founders. So, there is no way to be assured that your money will be safe if you decide to use the software.

We now come to his so called friend named Howard Davis. Mr. Davis claims to be an experienced trader who was lucky enough to run the Trader App software during its alpha and beta stages. He claims that by just running the test he made a fortune in a short time. The money he made is unbelievable, to say the least. If anything it was one of those exuberant figures that you’d expect any binary options scam to quote.

Similar to Brian we know little or nothing about Howard. Even by Googling his name we couldn’t find any mention of him or his profile which could give us any indication of his millions or his relationship to Brian.

We can safely assume based on the above proof that both these guys were paid to lie. Both of them have one thing in common i.e. they are promoting a fake trading robot. Brian and Howard are nothing more than common criminals promoting similar scams on the internet. 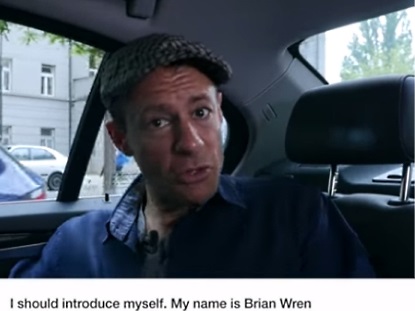 We could find no trace of Mr. “Brian Wren”

An app that does not have any performance data, independent endorsement and reviews is the one you should avoid. Unfortunately, The Trader App happens to be one of those.

Now that you know that Brian is trying to scam you it’s not hard to figure out that the Trading App has been designed to squeeze money out of unsuspecting newbie traders. If you try leaving the site after getting bored of these sale tactics a pop-up will try to convince you to stay by asking you to take action and get $500 in cash.

However, this is yet another ploy because they don’t actually tell you how to get the money. Also if this is a bonus, then it’s fair to say that Brian will not give you any bonus for free. He is no broker, so there is no way he can credit any money into your trading account.

Plus if the Trader App was really something that worked and they offered a 30-day free trail which was efficiently generating money with a broker of your choice the money would be credited automatically. Though bonuses generally come with a number of conditions. One condition is that you cannot withdraw any money until you meet a certain volume threshold of trades.

So, the broker will allow you to trade without making a deposit which gives you the chance to try the software in the real world with the cash bonus. Which begs the question as to why didn’t the Trader App also do this? Well because they know that the app is bogus, to say the least.

We have during the course of our review found into many fake reviews published on rogue websites. Even the testimonials are doctored. The photos are stock photos or stolen from people’s Facebook profiles.

Apps like the Trader App are polluting the trading industry, so it’s important to stay away if you don’t want to end up losing all your money and hopes in the process.