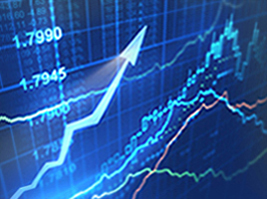 Triangles are usually continuation patterns which can expand and contract. The triangle’s trend lines are the ones that define the triangle itself. The triangle is contracting if the trend lines indicate that they will merge to form it at some point in the future, and when there is no merger in sight at the end of the chart on the right side, one knows they deal with an expanding triangle and trend lines which move in opposite directions.

A continuation pattern refers to a trend that is going to move or resume from the point it stopped before consolidation. Since we are dealing with a consolidation area in the form of a triangle, the trend that preceded the triangle will pick up where it stopped, as well as the price movement.

When dealing with this type of triangle, it is important to know that this triangle is also limiting, since after the triangle is broken, the price action will be limited. When the price breaks the pattern, the thrust of the triangle should be observed for confirmation of its reach. A total of 75% per cent falls onto the thrust if we compare it to the triangle’s longest leg.

To illustrate it on our triangle example from above; we can say that the triangle is likely to be forming a continuation pattern in the form of an x wave whereby the price is defined by the length of wave b, and all of them seem to appear in the form of a zigzag pattern, which indicates that it is time to buy call options (if the trend is moving upwards) or put options if the trend is moving downwards once the triangle is broken by the trend from b to d wave.

Triangles can also act as continuation patterns when there is a fourth wave which is formed due to an impulsive move. In this case, as well, we are dealing with a limited price action, since the price will be defined by the length of the upcoming fifth wave.

According to the renowned Elliot Waves theory, triangles not only appear at the end of complex corrections, but they can also appear independently. In that case, the triangle’s shape will depend on the independent structures which define the further action.

The most common waves that are formed by triangles as continuation patterns are the wave x, wave b, or wave 4. If the triangle forms the fourth wave, then the wave is also known as the connective or intervening wave. This simply refers to the fact that the fourth way is connecting two or more simple corrections which together form a complex correction. 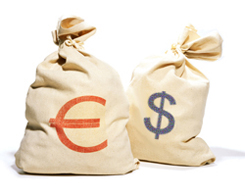 A triangle as a continuation pattern can also be a pennant which is simply a short-term pattern, so it is not that common for pennants to actually form a fourth wave, but yet they rather take the form of the x wave. To identify such a pattern, two trend lines should be observed, namely the a-c and b-d trend lines in order to spot a difference between them. You will know you are dealing with a pennant structure if the a-c line is not clean, but the b-d trend is. If you have studied the rules discussed on our Binary Options Academy and behave according to them, you will be able to recognize a clear and an unclear line.

As we already emphasized in the pennant pattern project here at our Academy, the pennant can only be bullish, and the move we measure is only applicable to the upside, which indicates to place call options. Yet again, if the triangle is a continuation pattern, our focus should stay on the b-d trend line which will help us in identifying the ideal options striking price.

If the triangle is going to be followed by limited price action, it is the trader’s job to look out for the b-d trend line, since it is the main indicator of future price action. This means that traders should place call or put options with different expiry periods, and which one they are going to place, will depend on the pattern’s timeframe.

When dealing with a five-wave structure, the trader has to observe the three impulsive waves and the two corrective looking for how the fourth wave will form. If the fourth wave forms a triangle, it is an indication that you can expect a limited price action.

Traders should stay away from placing put options if the impulsive wave is bearish after breaking the b-d trend line, given that the price will not go up further significantly. Traders can opt for put options but only with short expiry periods when the timeframe of the triangle is right, which further requires hedging the first position with long-term trades if they want to do it right. Long-term trades have to have longer expiry periods than the hedged position.

Triangle patterns and continuation patterns can serve as an efficient strategy for binary options trading since it gives a trader a clear advantage in price movements and predictions. Traders should bear in mind that the waves of a triangular are always corrective which further leads to the conclusion that as sooner trader master corrective waves the sooner will they be able to apply strategies by observing triangles and continuation patterns. Trading in this way is less speculative and less risky giving you clear identifications of what will happen in the market.