If you visit the United Trading Network’s website, you are immediately bombarded by an 11 minute auto-playing video at maximum volume. The video introduces you to Professor Anthony Grecko, a Professor of Business Finance at an unnamed university.

He introduces us to four of his star pupils who have apparently created a social trading platform for forex, which he doubts the ‘Forex Facebook’. The result was so impressive that it won recognition at the International Investing and Entrepreneurial Symposium for Millennials and also won a contest in the International Forex alliance with a grand prize of EUR100,000.

The name of this ‘Forex Facebook’ is of course, the United Trading Network. Professor Grecko then hands over the floor to its project manager, Adam Fletcher. Adam, who as a freshman aspired to be a hedge fund manager, is a member of the campus investment club.

At this club he met, Jaleel Bashir, a talented trader and expert at technical analysis. Since Adam was more of a fundamental analysis kind of guy, they decided to team up.

The idea of the social trading platform was Adam’s idea and after discussing it with Jaleel, they approached Professor Grecko for guidance and support. He agreed to mentor them and brought in the two remaining members of the team, Matt Kirby and Lydia Williamson.

Matt was an expert in investment banking and commodities trading while Lydia, a statistics expert, was there to help them on the systems side. Lydia created the algorithm that the platform operates on and explains how it analyzes potential trades, compares it to the trading strategies and then offers high quality signals based on these strategies.

The video concludes by them explaining that while using the United Trading Network software is completely free, a minimum $250 deposit with one of their partner brokers is required to join the trading network.

The Truth Behind The United Trading Network Video

Unlike the majority of binary options robots out there, United Trading Network refrains from making the outlandish claims that are so common in the industry. There are no claims of earning thousands of dollars a day risk free, nothing about becoming a millionaire within a year while sitting at home on your couch, and no justification of using top secret algorithms that the big banks are trying to hide from the public in order to maintain the status quo.

Nope, at first glance and to the untrained viewer, the claims made in the United Trading Network seem plausible. An 83% win rate does not seem too excessive, there are no guarantees of free money, and the social trading justification appears to make sense. 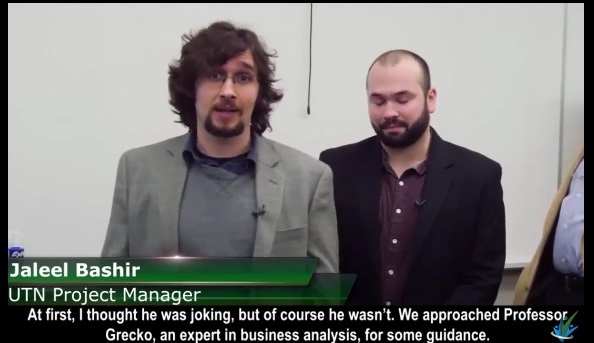 The promotional video, while less absurd than other shady robots, is still laughable

First, notice the fact that the name of the university is never mentioned. That’s very strange considering that a lot of their credibility comes from having a reputable professor at the helm.

According to the promotional materials, signing up is a fast process

And the reason for this is because Professor Grecko and his students are nothing but actors. In this case, they are all actors from Portland, Oregon, which for some yet unknown reason seems to be the place that shady binary options robot creators like to shoot their promo videos. If you don’t believe us, we even managed to track down the real identities of a couple actors in the video.

First up is Professor Grecko. He is actually an actor named Dennis Fitzpatrick and he is represented by the agency by the name of Arthouse Talent. He has also appeared in numerous binary options robots promotional videos; you may recognize him as ‘Walter Green’ from the Millionaire Blueprint.

Another actor we were able to identify was the actor playing Matt Kirby. He is also a local Portland actor named Matt Sunderland, represented by the Q6 Talent agency. No idea who the other three actors are, but you can be sure that they are also local actors from the area.

Another thing we want to point out is that at no point in the video are the words ‘binary options’ even mentioned in the video. All the actors repeated mention the word forex instead and if you only watched the promotional video, you would think that United Trading Network was a forex trading platform not a binary options one.

Yet on their website they only mention binary options. A possible explanation for this contradiction is that the promotional video was initially created for a forex product and has been repackaged for binary options instead.

When evaluating the truth behind the claims of all these binary options robots, you should always read the website’s disclaimer. Often, that will be the only bit of truthful information you can find. In the case of the United Trading Network, that is certainly true. Here is an excerpt from their ‘Website Agreement’ disclaimer.

“The Videos – the videos displayed on the Website are provided for informational and promotional purposes only and should not be relied upon in making decisions and are for simulation only by using actor(s) and demo accounts.

These videos were made in order to give you a sense and feel for what may be achieved while using the Software. The videos may not be accurate or based on accurate past true events, and are for simulation purposes only.”

The disclaimer says it all i.e. everything you saw in the promotional video was completely fictitious. And by the way, while an 83% winning ratio seems ‘low’ in comparison to what the other binary options robots are claiming; it is no less realistic.

If there really existed software that could generate an 83% winning ratio, you can be sure that they would never give it away for free.

There is nothing revolutionary about this system.

This is why the robots are always offered for free, their incentive is for you to sign up with their partner broker, not pay them any money directly (although you are paying them indirectly). Unfortunately, in order to promote their robot services, they have to resort to outlandish claims that are easily disproven.

The auto-trading software itself is just white label software bought off the shelf; in the case of United Trading Network, the software they use is exactly the same as another binary option robot, Trader’s Buddy.

The United Trading Network is not a legitimate social trading network, rather it is just a generic auto-trading software with a fictitious backstory.

You will most definitely not enjoy anything close to an 83% win rate when using this software; further you will also have to use an unregulated and potentially unscrupulous broker to do so. We highly recommend that you stay away from this network.